I’m not a stickler for condition. For the cards I’ve collected on my own, I like them Near Mint (NM), maybe EX-MT. It’s more important to me that the picture is sharp than that the corners are. I’m not bothered by off-center cards, slightly bothered by miscuts. All my sets are in pretty solid shape.

Then there are the cards I’ve gotten from other people over the years. Those tend to be more hit or miss. Not everyone put their cards straight from the pack into a shoe box or plastic sleeve. Some of the cards I’ve picked up from friends are nice, maybe EX or better; some look like they’ve been driven over by a car in a rough, cement-floored garage.

It’s the latter conditions I grappled with when I decided to finish my 1971 set. 1971 was the last year I let my mother (yes, let) throw out my cards. She would ask if I wanted them anymore and I, shockingly, told her no. Over time I reacquired a bunch of those, but in conditions that made me wince.

But when I looked and saw I only needed 57 cards to complete the set, I figured, what the hell, I’ll go for it, but I’ll go for it with cards in similar condition to the rest of what I had. Not only was pursuing 1971’s in Very Good (VG) condition a cheaper choice, it was also a liberating one. I didn’t have to worry if the corners were pointy enough, if the borders were as close to solid black as they could be (a notorious 1971 problem), if the cards were relatively well-centered. Once I finished the set, I was thrilled by it, happy to have them all, less concerned about the state of any individual card. I can tell you my Rich Morales (267) is a crime against collecting. Some slight upgrading is in order. 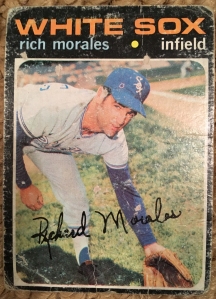 With 1971 wrapped up, I turned to 1970, the last set I didn’t have that I was reasonably close to. In mid-July, I assessed the situation. I needed 187 cards to complete the set, lots of high numbers, some big stars too. Whoever at Topps put Nolan Ryan at #712 should be subject to enhanced interrogation. 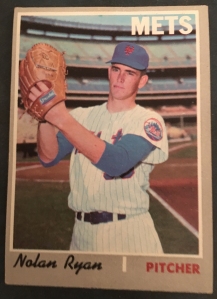 Again, I had some condition problems, but, if I went after VG or EX, I could get this done reasonably and that’s what I’ve done. Starting with a solid nab of 25 cards at the great Baseball Nostalgia in Doubleday Court, Cooperstown, I was well on my way. Then I tweeted that I was working on this set and, lo and behold, prayers, had they been said, were answered. Two friends (Chris and Mike) gave me significant piles of their 1970’s. Not only did these windfalls fill a lot of holes, but they allowed me to upgrade to a more EX set.

I’ve been working the old eBay machine for the rest. While I miss the fun of card shows (there aren’t any to speak of in the greater Cooperstown area), I don’t miss haggling with dealers. I’m eminently patient and will wait out losing auction upon losing auction until I get my price. There’s a fun to buying on EBay, a different entertainment than shows. Swooping in at the last moment to get a good deal makes me feel, for no valid reason, a bit smarter. With much good fortune, I picked up a lot of EX-NM cards at VG prices. I’ve also been selling some doubles and triples to subsidize the endeavor. I’ve had a lot of fun with this, which is sort of the point of card collecting.

9 thoughts on “What Condition My Condition Was In”