Except for a fairly brief period in my life, when it comes to baseball cards I’ve always been little more than an interested observer. Oh, I’ve purchased a pack (or two or three) of cards in most years since the early 1980s, I guess. But my “collection” is mundane and I spent only three or four years somewhat insanely buying box after box of cards (with money I didn’t really have) in the pursuit of a complete Topps set. Or Donruss or Fleer or even Score set (which should give you a pretty good idea of when I was in the grips of this particular mania).

But that’s a story for another day (if ever). The above is just a long-winded way of saying there’s a great deal about baseball/bubble-gum cards I’ve never learned, because I’ve never really invested much time or money in the pursuit. And so, somehow I didn’t discover until almost just this moment the splendid delights of Topps’s 1971 Supers.

Now, there are a couple of obvious reasons why I’d never even heard of the Supers, which were actually produced in 1971 and ’70. The first is that I wasn’t even in kindergarten yet; I don’t remember seeing any cards until a few years later. The second is that the Supers just weren’t popular (as you’d expect, considering their short run in the marketplace). Maybe more to the point, they’ve never become popular. There was never anyone saying, “Rob, you should covet these bits of cardboard.”

And yet, now I do covet them, and recently picked up a dozen or so on eBay (for cheap). 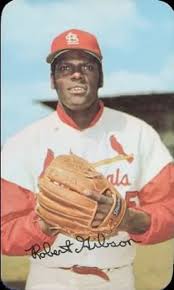 The cards are massive: 16.4 square inches, compared to 8.75 square inches for a standard card of that (and today’s) era. But even that understates the difference. The Supers are all image, zero border. Meanwhile, the oft-beloved ’71 regular set, with its black borders, winds up with an image of just 6.2 square inches, meaning the Supers actually give you 264 percent more player per card.

How do you turn down 264 percent more major leaguer?

Well, I can guess why the kids in 1971 turned it down. For one thing, there were only 63 Super cards, compared to a whopping 752 in the regular Topps set. For another, a regular pack cost you a dime and got you eight cards; your same 10 cents got you only two Supers. And finally … kids in 1971 had small hands! Those regular cards probably seemed plenty big enough!

Come to think of it, kids today probably still have small hands. Baseball cards were designed for baseball fans with small hands and sharp eyes. But my hands are big and my eyes … well, I’m getting fitted for bifocals this week.

I can’t be eight years old again. What I am is fifty years old with a few of the enthusiasms, or at least the capacity for enthusiasm, of an eight-year-old. And I gotta tell you, right now there are few things that bring me more joy than holding 16.4 square inches of rigidly thick, vividly colored cardboard featuring Willie McCovey’s young, smiling, handsome, BIG face.

The Supers lasted for just those two years, and I understand why it was only two years. Doesn’t mean I have to agree with it.