Topps had used the technique of using photos of traded players without their baseball caps in earlier years, but the use of small silhouetted action photos on the 1963 cards posed new problems. Topps designers tried to disguise the old uniform with airbrushing and some creative artwork. The results were often laughable.

576 cards in the ’63 set, 70 players are pictured without hats. Most but not all had been traded in the off-season. The majority of the 70 cards feature the player in the uniform of his previous team — the piping is usually the giveaway — along with a crude attempt at obliterating the old team name on the small action shot and by drawing the new team’s letter or logo on the cap.
The first base card in set (following the 10 cards of 1962 league leaders) is one of the hatless 70 — Lee Walls. Although he had played with the Dodgers in 1962, his color head shot shows him in a Cubs uniform. with whom he last played in 1959. His small action shot has the team name airbrushed out and a Dodgers interlocking “LA” drawn on his cap. Perhaps someone knows why Topps began its set with a player for whom they did not have any recent

Being an old Senators fan, one of my favorite cards represents one of the most obviously
botched cards in the set: lefty Pete Burnside’s #14. He is shown following through on a pitch in a full Senators home uniform, even though he is properly identified as a pitcher for the Baltimore Orioles. (He had been traded to the Orioles in December 1962, a few months before this first series card hit store shelves.) Compounding matters, his small action shot shows him with the team name on his old Tigers’ jersey (back in 1959 or 1960) airbrushed out and a crude “W” drawn on his cap.

The only other player in the set shown wearing his previous team’s hat is pitcher Stan Williams (#42). He has on his Dodgers hat in the large photo, but the Topps artists vainly tried to draw the Yankees’ interlocking “NY” on his action photo cap.

Six traded players — including Dick Groat, Bob Turley and Don Zimmer — are pictured in their color photo wearing caps that have the previous team’s logo airbrushed off. The new team’s letter or logo is drawn on the action photo’s cap. 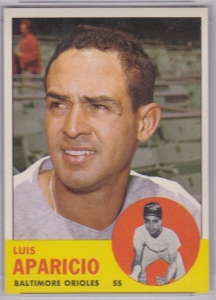 Five players who had been traded to the Orioles posed a real challenge for Topps. The Orioles players wore caps with a relatively wide horizontal bird on them. Results of the attempts to draw an oriole on the five action photo hats were mixed, to be charitable. Attempts to recreate the Tigers’ old English “D” also proved difficult.

In most cases, the airbrushing did little to hide the identity of the player’s previous team and, given the crude results, you have to wonder why Topps bothered.

Nonetheless, the ’63 set is highly regarded by collectors for its overall design and sharp color photos. The bright, orange on white-stock, backs of the cards were far more readable than those of previous years.

I'm a retired daily newspaper journalist and life-long baseball fan. I write biographers of players for SABR's Bio Project and game stories for the Games Project. Please feel free to offer suggestions for blog post by emailing me at senators24@yahoo.com. View all posts by Andrew C. Sharp