One of the unresolved (to me, at least) mysteries from collecting baseball cards from the late 1960s was how Topps handled the Houston Astros. As you likely know, the Houston expansion team was known as the Colt .45s for its first three seasons (1962-64) before becoming the Astros in 1965, coinciding with their move into the brand new Astrodome that April. Houston tried grass for a year, before contracting with Monsanto to install artificial turf (soon known as “Astroturf”) in 1966. That much we know. 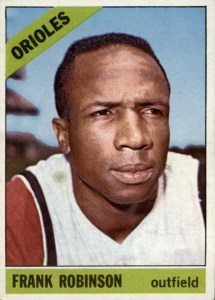 Topps made a point in this period of trying to never show a player in the “wrong” uniform; if a guy was traded from the Reds to the Orioles early enough in the off-season, Topps could correctly move him to the Orioles but would not yet have a photo of him with his new uniform. Instead they would use a headshot with no hat, or with the hat logo blackened out, or some other solution that would protect young kids from the horror seeing Frank in his old Reds togs. Of course kids could usually tell, but at least they tried. In the 1960s this was a particular problem, because there were 8 expansion teams and 5 franchise moves between 1961 and 1971. This led to a lot of blackened or missing hats.

Which brings us back to the Houston Astros.

In 1965, Topps did not react to the Houston name change right away, referring to the team as “Houston” in the early series (and showing the old .45s hats) and “Houston Astros” (with no visible old logo) thereafter. 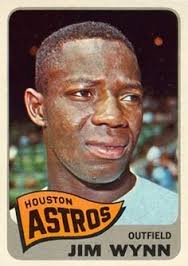 But for the next two years (1966 and 1967) Topps put out two great sets and treated the Astros with dignity — the correct name, the correct hats and uniforms. Problem over? 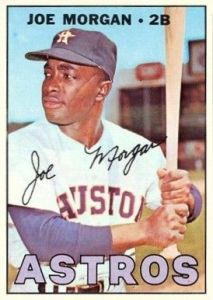 In 1968, suddenly the name Astros was not used on either the front or back of any of the cards, nor were the hats or uniforms shown. (The cards for the other 19 teams used the team nickname, not the city.) I was 7 at the time and an avid collector, but I did not really take notice of the missing Astros name until a few years ago. I spent some time tryi

ng to figure out why this happened, contacting Topps, former Topps employees, the Astros historian, Rusty Staub, and several knowledgeable bloggers. The most common reaction was. “I can’t believe I never noticed that.”

The most plausible explanation I have heard is that Monsanto was in a dispute with the Astros over the use of the name — though the baseball team used the name first, it was Monsanto that actually trademarked it (says the theory). Topps, seemingly uninvolved, took the cautious approach and decided to avoid using the name.

When this was going on I was already a rabid card collector — especially the cards of my beloved Red Sox. If I had grown up in Houston following the Astros, collecting an entire team’s worth of bland hatless logoless cards like this Jim Wynn card, might I have turned to other pursuits? Maybe

The Astros did not stop using the name, nor the logo, nor did they or Major League Baseball stop authorizing the use of the logo to other entities. Dexter Press came out with a beautiful set of postcard-sized cards in 1968 and had several gorgeous Astros photos (like this one of Joe Morgan). If I was a kid in Houston, I would have found these a better option.

In 1969 Topps again avoided the name Astros, and avoided the uniform in the first three series. Starting with Series Four, sometime around June, the uniform finally returned (though not the name). The dispute, whatever it was, had been resolved, but Topps likely decided to keep the team name consistent throughout the set.

Topps finally restored the Astros to full citizenship in 1970, giving many of us our first good look at the Astros uniform, especially these gorgeous home unis, in several years. It was great for me, but for the kids of Houston, Texas, it must have been glorious.

11 thoughts on “Whither the Astros?”