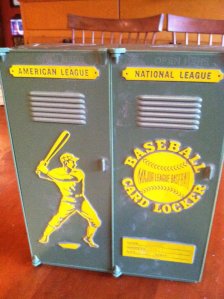 For Christmas in 1968, my grandmother gave 8-year-old me a green plastic baseball card “locker” to hold my growing collection. There were “slots” for each of the 24 teams, the American League alphabetical on the left, the National League on the right. To this day, if you ask me to list the major league teams I will recite them in the order I learned from this locker: Baltimore, Boston, California (now LA), Chicago, etc. Assuming I remember to add the newer expansion teams at the end, it takes me 20 seconds, tops.

Truth be told, this locker could not really hold my collection, which already required a few shoe boxes. Instead, each team’s slot held the most recent cards I had of everyone on the current roster. If I got a 1968 Willie Mays card, I would place it in the Giants’ slot, removing the 1967 Willie Mays card (if I had it). When the Red Sox made a 10-team deal with the Brewers in 1971, I transferred each of these players, so that George Scott could immediately join his new mates in Milwaukee. When the Yankees released Johnny Callison in 1973, he was moved into a shoe box until he got another job.

I did not have to wait for a newspaper to tell me what the new Red Sox lineup might look like–the cards in my locker were completely up-to-date, and I could immediately use them to envision Tommy Harper in left field, and Marty Pattin as the number 2 starter. I could do this in June, and I could do this in January. Baseball cards were a useful (and awesome) tool for obsessing about baseball 365 days a year. This locker was a fixture in my house until I went away to college.

During the 1980s, as the card market was booming and I was becoming an adult, I went along with the growing trend of putting cards in plastic sleeves, nine to a page, sets stored numerically in thick three-inch binders. And not just for old cards–you could buy a brand new set of Topps, Fleer, or Donruss, and within minutes, barely touched by human hands, all your cards could be preserved in pristine plastic. Perfect condition, someday I will be rich! What more could you ask for?

Soon more products were available to keep you from ever touching your cards. For my old Jackie Robinson and Ted Williams cards, plastic sheets would simply not do. No, they needed thick plastic screw cases. Every card worth more than $50, no better make it $10, got its own screw case. And keep your paws off of them, by the way. I might need a safety deposit box.

By the early 1990s I was no longer buying new cards, and my older cards were all properly sealed, safe from all humans (or oxygen). Like the Mona Lisa in the Louvre, they were to admired from a distance, no flash photography please. For the next 20 years I occasionally added to my collection of 1950s and 1960s cards, filling those empty sleeves in my notebooks, completing long ago sets. A few cards would come in the mail, I would pull the correct notebook down from the shelf, insert each of the cards into their proper place (or into a screw case), and then put the notebook back on the shelf for another month or two. It was … kinda fun? 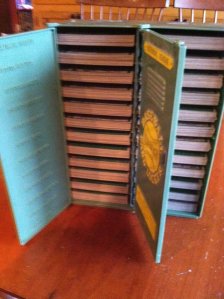 Several years ago I was on eBay and I saw that old card locker for sale and, I gotta be honest, it called to me. As my childhood version was long gone, I made the purchase and the locker showed up at my house a week later. On another whim, I took my 1969 set out of its notebook, sorted the cards by teams, and placed them in the locker. And what do you know, I discovered that I was riffing through these cards every evening, revisiting the season.

I will now spare you the gory details and bring you up to the present.

My screw cases are all gone. Thankfully, I avoided (and continue to avoid) the grading services that have blighted the hobby, so I didn’t have to worry about taking apart their ugly slabs. My plastic notebooks filled with plastic sleeves? Gone.

My lone concession to “taking care” of my cards is that every one of them (pre-1980) is in its own thin plastic “penny” sleeve, but otherwise all of them can be held and “played with” just as they were when I was a child. My cards are all in cardboard boxes, sorted by year, and can be arranged into lineups, or culled for Hall of Famers, or sorted alphabetically, or arranged by height. My maintenance is democratic–the 1952 Jackie Robinson and the 1975 Bob Heise are accorded the same level of protection.

Pictured to the left is the cardboard box I use to hold my 1969, 1970, and 1971 sets. At the moment they are sorted into teams, though that might change tomorrow. I could instead arrange my 1969 cards based on each team’s actual Opening Day roster, and use them to imagine the season ahead. I don’t think this Mets lineup is going to hit, but the Seattle Pilots sure look good, don’t they?

One important point. My cards are in great condition and well taken care of. I am not bending, folding, scuffing the edges. My 1957 Mickey Mantle, in Near Mint condition 25 years ago in its screw case, is in Near Mint condition today in its thin plastic sleeve, only now the Mick is filed with Bobby Richardson and Hank Bauer, where I think he would want to be and was meant to me.

My museum is dead, but my cards have never been more alive. Cards were meant for kids, and I shall never forget that again.

13 thoughts on “Death of a Museum”