I have a confession to make. My first addiction was to baseball cards. Like all good miscreants, I’ve found someone else to blame: my brothers, Tim and Steve.

The year was 1964, and I was an impressionable lad of six. My brothers brought home colorful wax packages containing treasure: cardboard gods swinging their weapons of destruction bathed in Technicolor glory. Each pack came with a special collector’s coin of a player. The whiff of gum ran up my tiny nostrils, grabbed hold of my brain, and I was officially hooked.

Once the hook had been inserted, I became a demon obsessed. I wanted to collect every damn card, but there was a problem. Topps released the cards in series from March through September, and many retailers would see baseball cards moving sluggishly through the end of summer and start of school, so they wouldn’t place further orders. Which left crazed fools like me in the lurch, with incomplete sets.

Crazed doesn’t begin to describe my mania. Raised as a good Roman Catholic boy, all the religious teaching went out the window when my allowance money dried up and a new series of cards had hit the stores. Theft was the answer. While my mother was out of the house, I’d rifle through her purse collection, scooping up what change had been left behind. Whilst visiting my pal Kevin Farley’s house, I stole a pile of cards while he went to get me a popsicle. I was a terrible person, but this is why God created confession, right?

My Dad was (and still is) a great guy. He kept a Mercury head silver dollar from the year he was born, 1924, on his dresser. One day I was on the prowl for card money, and I’d sucked up all the loose change I could filch around the house. A new series was out, and I was behind the other neighborhood kids in collecting. The 1924 coin slid into my pants pocket and a bee-line was made for Ray’s Toy Village in nearby West Portal.

I stormed into the toy store, grabbed a fistful of cards and slammed them onto the counter with the coin from 1924. The nice lady behind the register pawed the relic and examined it closely. “Oh, my! Are you sure you want to use this wonderful old coin to make this purchase?” Now I was getting irritated. She was standing between an addict and his drug. I nodded quickly and she shook her head in bewilderment as I snatched the bag like Smeagol clutching the almighty ring to his breast. All that was missing was a sinister cackle.

There was a kid on the block who was wise to other kids stealing cards from him, so he took a pen and colored the left corner of the card. He’d found a place to purchase cards from the 1969 sets 6th and 7th series, of which I had precious few. A mission was launched to his house under the pretense of a playdate, and the cards were stolen. I cut the left hand corner of the cards to issue my own statement of ownership, wiping out his previous brand. He accused me of theft and I was no longer welcome in his house, but that was secondary. I had the cards!

As I grew into adulthood, I realized some of the cards in my vast collection were obtained by ill-gotten means. It was time to right some wrongs. I ran into my pal Kevin Farley at our 20th grammar school reunion, admitted I’d stolen the cards 25 years previous, and made arrangements to return them to him. This was in 1992, and the cards were vintage baseball and football cards from the mid 1950s and early 60s. He was shocked and thrilled at getting the cards back after all this time, which represented probably $100-$200 dollars in value.

My children had an interest in coin collecting, and we began putting numismatic books together. We turned a page, and there it was: a Mercury head dollar. Guilt poured into my head and I seized a teachable moment. It was nearly Thanksgiving, and we were going to visit my Dad for the holidays. I took my kids to a coin shop, told them the story of how I stole that dollar from my Dad, and purchased a 1924 Mercury head coin for him. I presented it to my father on Thanksgiving, told him the terrible story and how sorry I was for being a rotten kid. He smiled and laughed, “I always wondered what happened to that coin!”.

Flash forward to today, and I’ve purged most of the cards in our collection, save for the Mantle, Mays, Aaron and other star cards. The bulk of the collection went to a good home: the Baseball Reliquary, and are used in a variety of exhibit displays. None of my three children took much interest in baseball cards, but my mania remains, abetted by technology. I found a sub-culture of baseball card geeks on YouTube and began trading for cards from the 50s and 60s with other guys. Once you get established in the group, people send you “just because” packages of cards they think you’ll appreciate. The levels of generosity are astonishing. 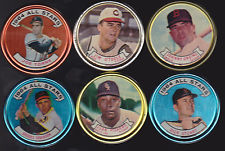 I have to thank my mother, for she never threw out the cards of my youth. She knew how incredibly important they were to my brothers and I. Oldest brother Steve gets an assist, because while I was away at college, he took possession of the cards and moved them to his home, possibly sparing them from a terrible death.

So here I sit, a reformed baseball card thief. My latest mania is to collect all 165 coins from that 1964 set, allowing me to recapture that moment when I first I held a red all-star coin featuring Ken Boyer of the St. Louis Cardinals, swinging a bat. Thanks to eBay, I rounded up all but 20 of them, but ran out of money. Now, where is my wife’s purse?

8 thoughts on “Confessions of a Baseball Card Thief”