There are very few things I remember from my childhood as vividly as I remember the look on my dad’s face when he came home one evening and discovered that my brother and I had taken scissors to our baseball card collection.

It was 1984. I was seven years old, and my brother was eight. We had just recently started collecting baseball cards, heading down to the Circle K every time we got our allowance to buy packs of 1984 Topps. The guy who ran the Circle K was named Dave Stewart, but not that Dave Stewart. Every once in a while he would get Fleer or Donruss in stock, but most of the time it was just Topps, so that’s what we bought.

The 1984 Topps cards were pretty basic: team name running vertically down the left side, headshot photo in the bottom left corner, action shot taking up most of the card, with the player’s name and position at the bottom to the right of the headshot. Thanks to nostalgia, it is still my favorite set because it’s the first one I ever collected, but there’s nothing really special about it.

But to a couple dumb kids who just started collecting, there was something special about the design: the headshots! Having two pictures on one card was pretty cool, we thought. Getting to see what the players looked like up close helped us feel like we really knew the players.

So we did what anyone would have done: we cut the headshots out.

I don’t remember our reasoning. Maybe we thought it was cool that once you cut it out, you had a little square with the player’s face on one side and his team logo on the other. Maybe we thought that’s just what people did — why else would they put lines around the headshot if not to guide young hands to safety-scissor them off the card? But whatever the reason, by the end of the night we had a few hundred baseball cards shaped like you took the state of Utah and rotated it 180 degrees. 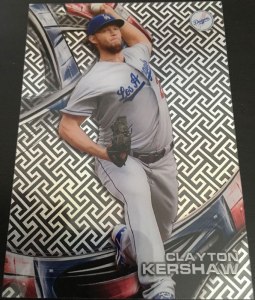 I was reminded of this over the past few weeks as I’ve worked on a Christmas present for my nine-year-old son. He is a big Dodger fan, and he loves Clayton Kershaw, so I spent a few weeks working trades and minor purchases with people on Facebook and eBay, gathering as many cards of Kershaw and other Dodgers as I could. By the time Christmas rolled around, I had 322 Kershaws, 56 Corey Seagers, 13 Julio Uriases, and about 100 other assorted Dodger cards for him.

I watched the thrill in his eyes as he looked through the cards, and then I glanced up and noticed Grandpa — my dad — watching too. It was probably my imagination, but in my mind my dad was thinking, “Gosh, I sure hope your son is smarter than mine was.”

I thought back to the exasperated, disbelieving look on my dad’s face that night in 1984, and the way he asked, “Why in the world would you cut up your baseball cards?!?” Those cards cost 45 cents for a pack of 16 and came with free gum, and we walked to Circle K and bought them with our own money. But our dad was still pretty upset at what we had done. What would I do if I came home and discovered that my son had blacked out the teeth on a Clayton Kershaw rookie card or scribbled a fake autograph across a numbered Corey Seager card?

The end result was the same conclusion I’ve come to hundreds of times before: collecting baseball cards has changed since I was a kid. In the end, my 1984 Topps Bruce Bochy is worth about the same with the headshot cut out as it would have been otherwise, because the cards from my childhood have very little value. They were overproduced and lousy quality. They were also perfect and my main source of happiness growing up, and that remains true no matter how defaced and destroyed the cards are.

I want my son to have the same joy of collecting cards that I had, but I don’t know if that’s possible. Inflation on allowances has not kept up with the cost of baseball cards, and there are subsets and special sets and premium sets that he could never hope to afford on his meager “income.” I opened a “box” of Topps High Tek last night — I put “box” in quotes because each box contains exactly one pack of eight cards. I happened to pull out a Kershaw card, and it is a thing of beauty. But my son would have to save many months of allowance and pick up some paid chores around the house to afford an eight-card box of Topps High Tek. Unless I subsidize his habit, he will never know the joy of pulling that card from a pack.

So far, I have subsidized the habit. I learned math and reading and trivia from baseball cards, and I like the idea of my boys having a similar experience. But there may come a time when I say enough is enough. It might be related to the money, or it might come when I least expect it, perhaps when I walk in the door one evening and see my son holding a pair of scissors.

Gosh, I sure hope my son is smarter than my dad’s was.

Jeff J. Snider is editor-in-chief at Baseball Essential. He grew up in Southern California as a Dodger fan, and now he lives in the barren wasteland (baseballishly speaking) of Utah, where he is raising a family of Dodger fans surrounded by NBA and college football fans. You can follow him on Twitter at @snidog. View all posts by Jeff J. Snider