The black baseball card in my hands contained the haunting image of a somber fellow wearing a Cubs batting helmet.

He looked so sad. All the other baseball cards I’d seen were bright and colorful, with the players gaily swinging bats, smiling at their good fortune. I turned the Hubbs card over and learned “the private plane he was piloting went down in a snowstorm near Provo, Utah”. I would later learn that Ken Hubbs was deemed a special player: 1962 Rookie of the Year, and the first ROY to win a gold glove. Set a fielding record the same year: 78 consecutive games and 418 chances without making an error. He played in the Little League World Series as a kid, was recruited to play quarterback for Notre Dame and UCLA to shoot hoops for John Wooden. If there ever was an All-American boy, Hubbs fits the profile. He even died trying to conquer his greatest fear. 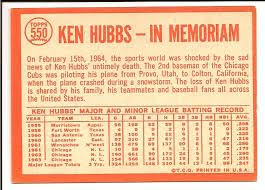 For many of us card junkies, we recall the day we held that black shroud in our hands and felt a small hunk of our innocence ripped away. The real world had intruded into the special place where I’d always felt safe, and, for the first time in my young life, felt vulnerable (I was too young to grasp the enormity of the events of November 22, 1963).

And there was more death on the way.

The Houston Colt .45s had a seductive name and logo, even if they weren’t very good. There was something different about the back of the card of one of their pitchers, Jim Umbricht. It said he was 6’4”, 215 pounds and

was “one of the NL’s top relievers in ’63…”. The card also contained an epilogue I’d not seen on any other cards, settling under his stats, where lively cartoons usually appeared if you scratched the surface with a coin:

What?! Another player died in the same year? Is this some kind of epidemic?

Then came the questions that had no answers: why did he die? How did he die? The card didn’t say (Hubbs died 2/13/64, giving time to make the special card). That was more unsettling, not knowing what took the life of one of the NL’s top relievers. In adulthood, I would learn Umbricht was diagnosed with malignant melanoma in his right leg in March of 1963. His comeback from surgery made national headlines and he had arguably his best season pitching in agonizing pain. Dead at age 33, his ashes were spread over the construction site of the Astrodome.(1)

If my technicolor baseball gods were not impervious to the rigors of life on earth, what chance did the rest of us have? Some spend a lifetime looking for such answers.

One of the problems with mythologizing athletes who die young is getting at the truth about that person: who were they, what did they mean to their friends, family and community, and, most importantly to me, what kind of a person were they?

I decided to spend some time getting to know Ken Hubbs further. I contacted the Ken Hubbs Foundation in Hemet, CA, and spoke with it’s leader, Ron Doty. The Foundation’s mission is to honor athletes selected from high schools in the area, selecting boys and girls “who display not only outstanding athletic abilities on the field of plays, but also achievements in the classroom, community, in leadership and in community service.” I ordered a DVD of the mini-documentary made about Ken during his playing days, “A Glimpse of Greatness”. It lionized Hubbs further, but it shared perspectives of him growing up in the town of Colton as someone who was a leader and roundly admired. Ron told me of the annual ceremony and invited me to attend, which I plan to do as one of the stories for my new baseball documentary series.

I did more reading on updates of the Hubbs story. The guy was like a cross between a saint and Knute Rockne. Didn’t drink or smoke, had to be dragged off not just playing fields, but PRACTICE fields in his never-ending quest for perfection (Alan Iverson, take note). He was a legend

before he became pro, with stories of him hitting a half-court shot to end the first half over a rival high school team AND nailing a buzzer-beating jumper to send the game into OT, eventually leading his Colton squad to victory. Another high school story has him breaking his foot before a big football game, stuffing the casted foot into a size 14-shoe and playing the entire game. (2) If I didn’t know better, Ken Hubbs crawled out of a John R. Tunis story.

But there is something about his death that gnaws. Was it the irony of his search for conquering his fear that led to his demise? After taking flying lessons, Hubbs fell in love with it and bought a Cessna 172. Brother Keith recalls watching his Ken make touch-and-go landings in 1963, with his father asking him to talk Hubbs out of flying. He was supposed to fly with Ken and a friend to Provo to play in a charity basketball game, but his schedule changed. The morning of his death, a storm moved in that Hubbs thought he could outrace. It was less than ten degrees and the visibility was terrible when he took off. Hubbs tried to turn back to the airport shortly after taking off, but the die had been cast. He had only 71 hours of flying experience and wasn’t qualified to fly by instruments and lost his bearing. The plane went into a death spiral, crashing into a Utah lake, leaving a ten-foot crater. It took divers two days to recover the bodies. (2)

Hall of Famer Ron Santo was so unsettled by Hubbs’ passing, he had to see a priest. Ken’s brother, Keith, had recurring nightmares so bad he didn’t want to shut his eyes. He had one final dream that snapped him out of it. In that dream, Ken told him, “I want you to stop worrying about me. It was quick and there was no pain. And I’m happy where I’m at.”(2)

Cessnas in the air mingling with snowflakes. A cancer victim blazing a final path of glory. Both spirits refusing to go gently into that dark night. Maybe that is the lessons of the Ken Hubbs’s and Jim Umbrichts’s: play hard, fight through the challenges and maybe then, and only then, we’ll be happy where we’re at.