I have written about this subject before, but have not done so here. This remains an area of study for me, and hopefully this post will catch some of you up.

From 1956 to 1980 Topps had a virtual monopoly in the baseball card world. There were exceptions along the way, mainly small specialty or regional sets, but for a quarter century the Topps base set dominated the field.

Topps maintained its monopoly by signing players when they were still in the low minors. They gave prospects five dollars as a binder to lock in exclusive baseball card rights for five years. Topps renewed these binders regularly and then paid players $125 per year if they were used on a card or if they appeared in the big leagues for 31 days. Topps even provided the players with a catalog of items they could choose from in lieu of the cash, like a set of luggage or a television. Topps continually renewed players prior to the expiration of their deals, keeping almost everyone in the fold.

In early 1966 the MLBPA hired Marvin Miller, an economist from United Steelworkers, as their first executive director. Over the next several years, Miller and the players engaged in true collective bargaining, earning increased benefits, larger salaries, an impartial grievance procedure, and, ultimately, limited free agency. What has been mostly lost to history is the role that baseball cards played to solidify the union.

In September 1966, the MLBPA created a group-licensing program—allowing companies to make deals to use any or all players’ names and pictures to sell their products. The union soon had very important and beneficial deals with Coca-Cola and others, but the contract that Miller most wanted remained elusive. Topps had binding agreements with virtually every player in professional baseball, making a group license seemingly impossible.

The player deals seemed inadequate to Miller, who set up a meeting with Topps, whose president, Joel Shorin, told him: “There will be no changes because, honestly, I don’t see the muscle in your position.” This response did not surprise Miller – he knew that he was not going to get a better deal from Topps by appealing to Shorin’s sense of fairness. That is not how labor battles were won. He needed muscle.

In early 1967 Miller suggested to the players that they stop renewing their individual Topps contracts and boycott Topps photographers. This was the only way, Miller advised, that they could get Topps to deal with them. Although the action was voluntary, Topps was able to take no more than a handful of photos during the 1967 season, and, with the dispute unresolved, none at all in 1968. This had an effect on the 1968 Topps set, which was not able to show as many properly attired photos as usual, and a much more dramatic effect on the 1969 set.

Most Topps photographs in this era were taken either at spring training, or at one of the New York ballparks during the season, and almost always during the previous calendar year. For their 1968 set, Topps would want photos of the player taken sometime in 1967, in the uniform of their current (1968) team. Topps faced a challenge when a player was traded during the season, as a look at the 1968 Red Sox cards can illustrate.

The Red Sox acquired Elston Howard from the Yankees on August 3, 1967. In order to get a photo of Howard in his new uniform for his 1968 card, Topps sent a photographer to Fenway Park in late August (note the home uniform). Norm Siebern, acquired on July 15, was likely shot the same day. 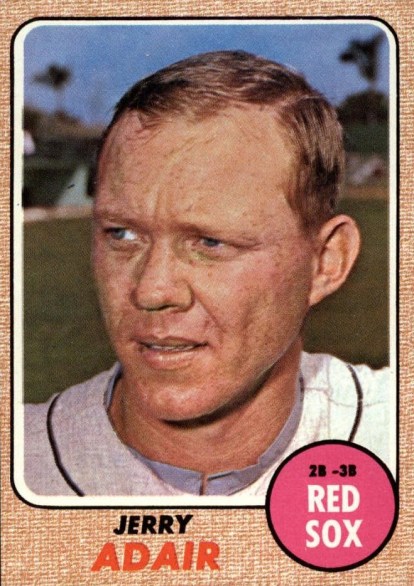 On the other hand, Gary Bell and Jerry Adair joined the club in June 1967 but Topps used older photos of them in 1968 — both wearing uniforms from previous teams and photographed without a hat (the usual Topps trick in these situations). Why didn’t Topps take these photos in August when they got Howard and Siebern? A plausible explanation is that Bell and Adair were observing the boycott while Siebern and Howard were not. We can’t know for certain — maybe the players were in the bathroom at the time — but we know that by August Topps was having trouble getting players to pose.

More problematically than using an old photo was having no photo at all. Sparky Lyle made his big league debut for the Red Sox on July 4, 1967, and pitched in 27 games for the club in the pennant race. But Topps did not photograph Lyle either, so he did not get his first card with Topps until 1969.

Another interesting artifact of the 1968 Topps set is that the company made “team cards” for only 13 of the 20 teams. If you were a set collector, at some point you would have noticed that the team card you were waiting all summer for, the Red Sox for example, did not exist.

By the spring of 1968 the boycott was universally observed, and there is no evidence that any photos were taken that year. Topps and the MLBPA reached an agreement in November 1968, but Topps still had to put out a 1969 set without having any photos from the previous 18 months.

Making things even worse, Topps had to deal with four new expansion teams (whose players would appear hatless), the Oakland A’s (whose move from Kansas City caused them to be hatless), and the Houston Astros (who were hatless because of a logo dispute). That covers 6 teams, or 1/4 of the players.

Topps skipped the team cards, a staple since 1956, altogether.

If that weren’t enough, Topps used old photos, many of them recycled from previous years. Tom Seaver, Joe Morgan, Hank Aaron, well over 100 in all, used identical images from 1968. 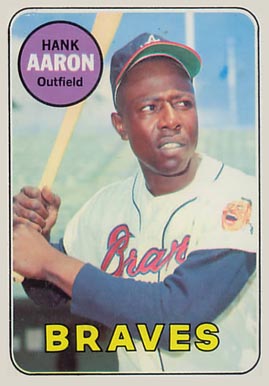 In some cases Topps recropped the image, as they did with Carl Yastrzemski and Ernie Banks. Willie Mays used a recropping of his 1966 card. 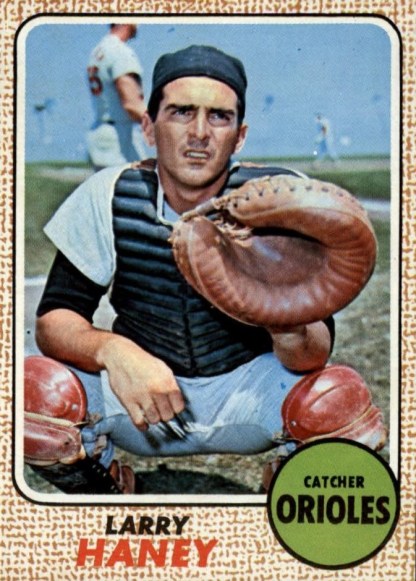 The Reggie Jackson card, his very first Topps card, stands out because it presumably was taken during the boycott — the A’s moved to Oakland in 1968 and Reggie is shown in an Oakland uniform. I recently learned from Keith Olbermann that Topps purchased this photo, and a few others, from another photographer. 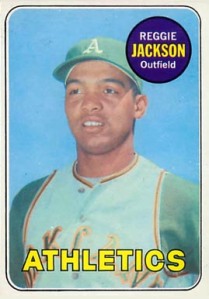 The Johnny Bench card, his first all to himself, used a photo from a few years earlier. Many Topps photos — Reggie Smith is another example — show much younger versions of their subjects.

In November 1968 Topps caved, agreeing to double its annual player stipend (to $250 per year) and to pay a royalty to the MLBPA of 8 percent on revenue up to $4 million, and 10 percent thereafter. In the first year of this deal the Association collected $320,000 from their Topps license, which came out to $500 per player on top of their individual deals. By the early 1980s, the union collected more than 10 times that from the licensing of baseball cards.

One could say that this was the first time the fledgling union used their collective power to effect change. “It was important on two levels,” said Jim Bouton. “One, it showed how powerful Marvin Miller was and how smart he was. It gave him instant credibility. But also, the player’s association became immediately self-funding.” Today’s licensing program, rebranded as Player’s Choice, nets tens of thousands of dollars per player annually, and funds charitable acts all around the globe.

As for the kids of America, in 1969 they were mainly annoyed, or at least confused. I loved the designs for both of these sets, but would have preferred fresh images of my heroes in those very formative (for me) seasons.

In 1969 Topps hustled to spring training sites and took lots of photos of cooperative players, and got many of these into their late series cards that very summer. By July of 1969, we got to feast our eyes on gorgeous cards of players wearing the uniforms of the four expansion teams, as well as the A’s and Astros.

In 1970, Topps showed off some of its best-ever photography. And kids everywhere turned away from their paths toward delinquency.