I had two eye surgeries last week. Two! The retina in my right eye got detached, seemingly around 3 months ago, but I only noticed it a few weeks ago when the damage entered my field of vision. The surgeries were successful, but it’s going to take a while before I have improved vision in the eye.

While eye issues kept me from my weekly baseball cards blog post, they didn’t keep me from the cards themselves. I had some stuff to put away and I went fishing for doubles, triples, quadruples I could list on EBay. Though my vision was problematic, it didn’t deter me from easily retrieving what I needed. Why? Because I’m so friggin’ organized!

I’ve always been pro-long box. They are the most effective, and efficient, way to store cards. They also are best because I can access the cards. If you haven’t read Mark Armour’s “Death of a Museum” post, do so. It hits me right where I live. I love to handle my cards and pulling them out of boxes is a real pleasure.

The only downside to my system is that I have used and reused the same boxes. They’re all labelled, but some are labelled on both ends. I thought I had averted mass confusion, but it took my three weeks to find some old football doubles and I was driven to near madness. Turns out I had them filed under 1992 baseball. Still, I was organized enough to realize (eventually) how I could track them down.

Some sets are still in their original boxes, if need be. I have pulled some sets out when their initial resting place bugged me. 1980’s Donruss came in the worst boxes, flaps folded inside the box. That always struck me as corner dinging by design.

I use albums and sleeves on occasion. Mostly it’s for oversized cards that won’t fit into regular size boxes. A few “normal” card sets are in sheets. I have no criteria for what makes it to an album enshrinement, but some do. It’s not nearly so satisfying to thumb through Ultra Pro sleeves as it is to have a handful of cards, but it does make it easier to show them to others who may not be as sensitive to handling other people’s stuff. 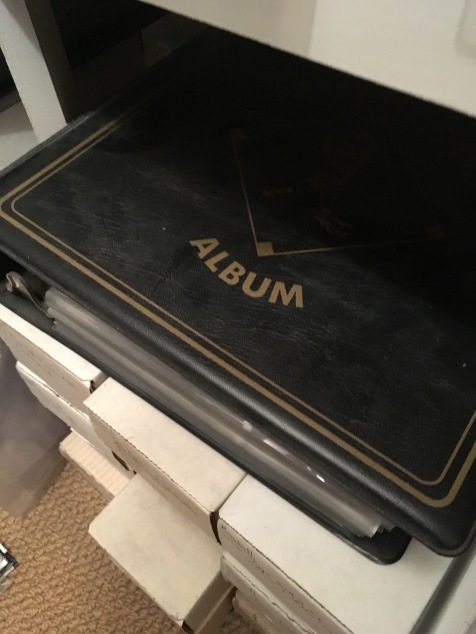 I have a close friend who is also a collector and, to be kind, less organized. It leads him to worry that when he kicks the bucket, his cards will find their way to the dumpster. I’ve offered my services for when his demise comes. Still, it would behoove him, and all, to get their card houses in order. If you won’t do it for yourself, at least do it for your family!

Note: I am immensely curious how people keep their cards and how they enjoy them. Feel free to drop a comment on that.