When the Milwaukee Braves moved to the midwest from Boston for the 1953 season, the local populace was ecstatic. From 1947 through 1952, thanks to the Milwaukee Brewers serving as the Triple-A affiliate for the Braves, the locals had already had the opportunity to learn the names of many of the Braves prior to their promotion to Boston. The move was an immediate financial success for the club — attendance went from 281,278 in Boston in 1952 to 1,826,397 in Milwaukee in 1953. It didn’t hurt that the Braves went from doormat to a second place finish.

As that attendance jump shows, the Braves captured the hearts of Milwaukee immediately that initial season. As detailed in the September 16, 1953 issue of The Sporting News, the players themselves received outpourings of monetary support from the fans. Wisconsin native Andy Pafko, for example, was quoted saying:

We never knew a player could have it so good. You know, the only thing we have to buy in the way of food is meat. The rest we get free–milk, cheese, butter, eggs, frozen vegetables, cookies and even bread.

These people just can’t do enough for you. The other day the fellow at the parking lot where I leave my car overnight came over and said: ‘I understand you’re Andy Pafko of the Braves. Park here any time you want to and it won’t cost you anything. I’m sorry I didn’t know who you were sooner.

It should come as no surprise, then, that multiple local companies sought to capitalize on the good feelings engendered by the team. One of those companies was Spic and Span Dry Cleaners. As checklisted in the 2011 Standard Catalog of Baseball Cards, edited by the late Bob Lemke, Spic and Span issued multiple sets of photos and cards featuring the hometown Braves beginning in 1953 and ending in 1960. Included in this cavalcade of items were cards, photos, and postcards of various sizes and shapes. Here is a list of those issues:

In addition to these cards, Spic and Span also used Braves players on other ephemera around their business. Specifically, in 2013, a paper dry cleaning bag came up for auction at Mears Auctions, and it sold for $92. 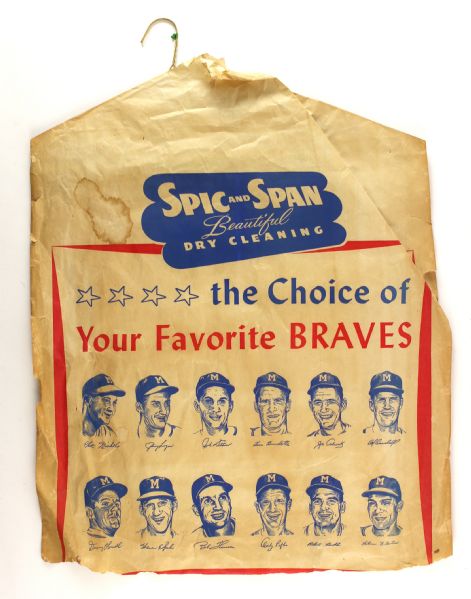 As the Braves started their decline in the 1960s before they bolted for Atlanta, Spic and Span and other local retailers lost their taste for being involved with the team. Though Milwaukee spent just four seasons without a major league team of its own — really two years if you count the games in 1968 and 1969 that the Chicago White Sox (with help from eventual Brewers owner and Commissioner Bud Selig) played in Milwaukee — Spic and Span was pretty much done with the baseball endorsement business.

As a postscript, despite being a national dry cleaning chain into the 1970s, Spic and Span barely exists with that name today. The U.S. Environmental Protection Agency cracked down on the dry cleaning industry because of its pollution of groundwater. The solvents that dry cleaners used were loaded with trichloroethylene and tetrachloroethylene — known, potent carcinogens that dry cleaners often just dumped out the back door. Today, Spic and Span is nearly gone, but its legacy lives on both in baseball memorabilia and far less exemplary areas.