I remember pieces of the 1964 season. I remember that we watched the Dodgers sweep the Yankees in the 1963 World Series. But my earliest baseball memory is being really excited about finding a Roger Maris card on the back of a box of Post cereal in 1962. Although I did not have this card in my possession for close to fifty years, its image was burned into my memory. This blog and my plans to write this post caused me purchase the card displayed here. 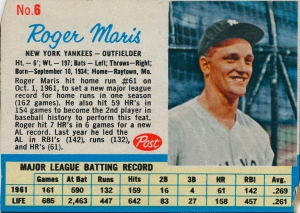 Post started their brief foray into sports cards with a nine card set of oversized cards in 1960, which they put on the back of boxes of Grape Nuts Flakes. The cards were 7” by 8 3/4”. The set contained five baseball players (Eddie Mathews, Mickey Mantle, Al Kaline, Harmon Killebrew and Don Drysdale), two football players (Frank Gifford and Johnny Unitas) and two basketball players (Bob Cousy and Bob Pettit).

They went full on in 1961, when they issued a set with 200 baseball players, all standard baseball-card size.  The cards were blank on the back, with a color photo and biographical information on the front (with the photo on the left), along with lifetime and 1960 statistics. The name is in black, in a sans-serif font , and the phrase “BASEBALL STAR CARD No. ##” in black across the top, with a row of eight red stars below. The statistics are on a yellow background, with “MAJOR LEAGUE BATTING RECORD” or “MAJOR LEAGUE PITCHING RECORD” printed in white on a black background above the stats. The cards appeared on ten different varieties of cereals in multiple box sizes, and also on variety packs. There were 73 different box panels, affecting the variability of the various players. For example, for the Post Tens bottom tray, there were seven panels of three cards each. Only one of those 21 players appeared on any other panel. Cards were also available in team sheets, directly from Post. These cards came on thinner stock. There were four cards which were only available in this way, as well as cards that were only available on boxes. Information on some cards was updated as the year progressed. Dan Mabey, the recognized authority on the Post issues says there are 361 different box cards.

The 1963 set ceases the differentiation between the leagues and returns to a standard black serif font for the player names, The rest of the card uses a sans serif font, with the team name and position in all caps red. The card number is in red, prefixed by “No.”, and with three blue stars on each side, to center it above the player name. There are three blue stars on each side of the “MAJOR LEAGUE BATTING RECORD” or “MAJOR LEAGUE PITCHING RECORD” in the stat box.