In the summer of 1983 I was 22 years old and writing software for a large defense contractor (Raytheon) in Rhode Island. Had a secret security clearance and everything. As it happens, a joint software project with Sperry-Univac required that I spend a bit of time that summer in St. Paul, Minnesota. The Defense Department (essentially our employers) was conducting round-the-clock stress testing on our weapons control system at Sperry, and someone from Raytheon had to be present. The work consisted almost solely of sitting in a chair (probably reading a novel) ready to step in if there was a test failure. My most vivid Twin Cities memories that summer were multiple trips to the Metrodome–mostly to see the Twins, but once to a Vikings preseason game where the crowd vigorously booed Broncos rookie John Elway.

After a couple of week-long sojourns with my boss, I made a trip by myself near the end of the summer. The solo voyage was to be an annoyance not because of the work, but because of logistical issues I had never dealt with before–I didn’t own a credit card, for example. No worries, I was told. Raytheon prepaid all the big items, and then gave me a 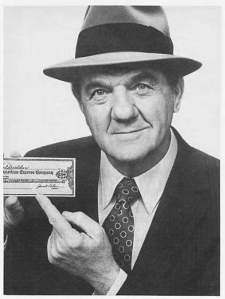 stack of travelers checks (look it up, kids) as a “per diem.” This $25 per day was ostensibly for food, but I was told that I was free to use it however I wished.

As luck would have it, my hotel provided free breakfast, and there was a lunch spread at work. I planned to go to a couple of Twins games, and I was pretty sure I could buy a prime ticket, food and beer for that budget. The other three evenings I figured I would just find some nice restaurants and bring a thick book. I brought some cash for incidentals, but I was optimistic that my per diem would be enough to get me through the week in style.

These well-laid plans were upset on my very first day when I discovered a delightful baseball card store near my hotel. (By “near my hotel,” I might mean: “up some obscure side street I found after poring through the yellow pages and consulting a local map.”) After wandering in, I drifted past the usual boxes of modern wax packs to the display case filled with old cardboard from the 1950s. At this point my collecting consisted of very slowly filling in the sets from my childhood (beginning with 1967) and keeping up with the annual releases.

But one look at this pair of cards at the top of the case and I was like when Tony first laid eyes on Maria in “West Side Story.” The twin objects of my affection were from 1956, and they carried the same price tag: $25. I might have seen both cards before, but never in this condition or at this price.

On the other hand, I had never spent $25 on a baseball card before. Further, I didn’t really have $25–I had no credit card, I just had a bunch of traveler’s checks that I had already accounted for.

At that moment I realized that the traveler’s check budget needed refiguring.

I went back to my hotel and ran through numbers again. I wasn’t going to give up the two Twins games I had planned–don’t be silly–but the rest of the food suddenly seemed extravagant. What’s wrong with a nice sandwich?

Somewhat surprisingly, I made a fairly mature decision. I decided I would eat frugally throughout the week and return to the card store on Saturday morning before my flight. If I had money left, perhaps I could buy one of those beautiful cards? (If they were still there.)

The week passed uneventfully as I tried to keep my mind away from the card store. The weapons simulations did not misfire, I enjoyed my free breakfasts and free lunches, and discovered that I didn’t really need that second hot dog at the ballgame. On non-game nights I found some takeout and ate in the hotel.

Come Saturday morning and, surprise surprise, I still had about $60 in traveler’s checks in my wallet. I packed up my suitcase and headed for the card store.

As luck with have it, both of my dream cards were still in their case, and I trembled a little when I announced that I would take them both. The guy behind the counter chuckled at my traveler’s checks, but I accepted the teasing rather than tell him my sordid story. These two cards instantly became the best two cards in my collection. They still are.

I have made many baseball card purchases over the years, and to this day I usually feel at least a bit of guilt. (Is this really the best use of my money? Is that really a hole in my son’s shoe?) But as I flew home on that plane 34 years ago I felt nothing but satisfaction. I had not taken money from my children’s college fund. I would soon come to realize that defense department work was not my bag, but for these two cards I know who to thank: Ronald Reagan and his military buildup.

On the flight home I took the cards out of my brief case every ten minutes or so, and had the card backs memorized by the time we crossed over Detroit. The woman in the seat next to me gave me that look. You know the one. 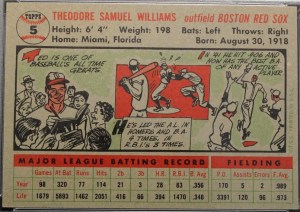 3 thoughts on “Doing my part to win the Cold War”