I think a lot of us went through a phase where we recognized that collecting cards wasn’t cool, that making it known at 18, 20, 22 years old that we were working on completing our 1967 Topps set was not the best pickup line. “Hey, how’s it going? I gotta tell you, finding a Near Mint Juan Pizarro high number is really tough. Can I buy you a drink?” It doesn’t work.

You know you’ve met “The One” when you can openly fess up to what you perceive as your most embarrassing traits. Karen was “The One,” and not only did she quickly know I collected cards, but she came with me to shows! That’s true love. It was at one show, I think in New Jersey (let’s just say New Jersey, it’s a good setting), that having Karen along made all the difference.

Down to my final few ‘67’s, I found a dealer with a nice supply in nice condition. I got what I could and now, with one card to go, but the one card I didn’t see, I asked – “Do you have a Red Sox team card?”

I bought the cards he did have and we walked away from the table.

“I can’t believe he didn’t have the last card I needed,” I said, moaning the words out, Eeyore style.

Really? How did I miss that? We headed right back and Karen was dead right. He had the card, it was in another box behind his table. He got it and it was beautiful. Thanks to Karen, it was mine.

Sure, I would have gotten the Sox team card eventually, yet, in my mind, I never would have completed the set without Karen. It’s a better story that way and that moment is eternally connected to that set and this card: 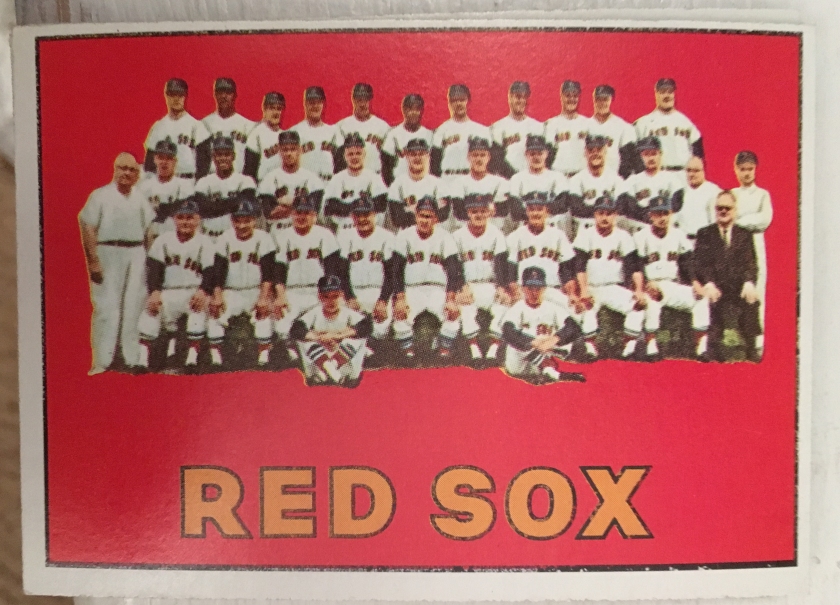 5 thoughts on “Finding the Right Woman (and the Right Card)”