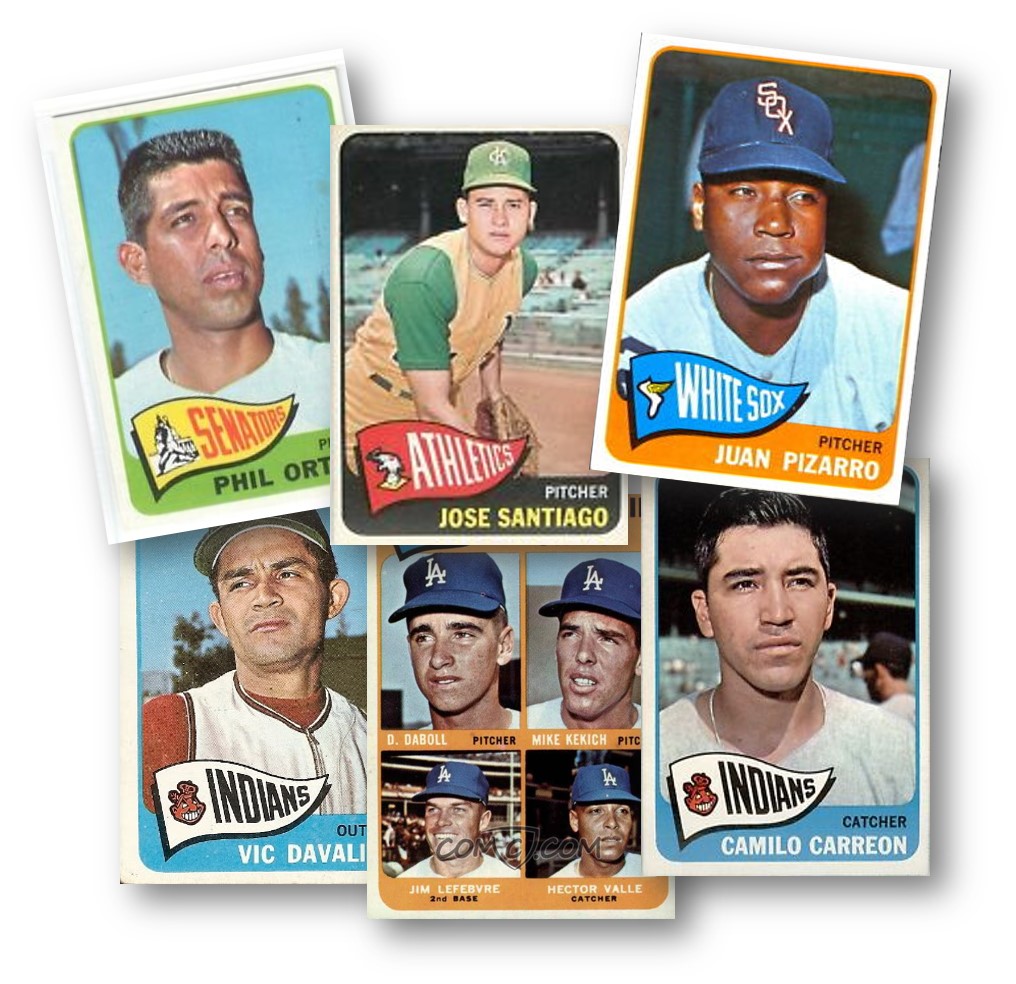 The Topps 1965 series was a 598-card set, featuring the team logo within a pennant.  The 2 ½ by 3 ½ inch cards included rookies such as Joe Morgan, Steve Carlton, Jim Hunter and Tony Perez.  I would later become more interested in a group of cards that would lead to a presentation at the Society for American Baseball Research (SABR)’s 46th annual convention in Miami, Fla.

As I tell the story, I attribute the interest in the 1965 cards not only because it was the year of my birth, but also I offer thanks to fellow SABR chapter member, Mark Armour, who wrote a great series on Topps cards for a baseball blog.  At the time, I had only been collecting cards from 1970 to 1990.  As a kid, I starting collecting cards around 1973, throwing them into a box, where I was spent time sorting them first by team, in alphabetical order, then later by card number.  And then, maybe sort them once again by team.  Alas, like many a lad, my precious pieces of cardboard would fall victim to a mother’s cleaning and obtuse unawareness for her child’s treasures.  And like that, they were gone.

Later as an adult with some disposal income, I could reach back into my childhood, and begin my favorite passion, collecting the baseball cards I had lost.  I don’t know how else to explain it, but it was if I had found old friends, and enjoyed the time of catching up.  I think 1970 seemed like a good time to start my re-collecting.  But, along comes Mark and his fancy nostalgia for cards in the 1960s.  I looked again at the 1965 set, and thought they looked fun, and decided to start there.

On eBay, I found a 1965 medium grade 23-card lot for $30.  A week later, I made a pleasant discovery that out of the 23 cards, six of them were Latino players.  I am a Latino baseball enthusiast, so the find was awesome.  From there, I started wondering about these guys.  They weren’t the Latino superstars, just “common”, in the baseball card vernacular.

They were: Phil Ortega (pitcher, Washington Senators); José Santiago (pitcher, Kansas City Athletics); Juan Pizarro (pitcher, Chicago White Sox); Vic Davalillo (outfielder, Cleveland Indians); Camilo Carreón (catcher, Cleveland Indians); and Héctor Valle (catcher, Los Angeles Dodgers).  The cards were in decent shape: no bad creases, no rounded edges, and the photos still relatively sharp.  Overall, I was happy with the purchase, but still…who were these guys, and what impact did they have on their teams?

I think out of the six, I was most familiar with Davalillo and his days with the Dodgers in the 1970s.  I have his 1978 Topps card.  In researching their 1965 contributions, the most remarkable thing you can say is that their year was pretty unremarkable.  Save for Davalillo, that is, who had an All-Star year with a batting average of .301 over 142 games, collecting 152 hits along the way.

He was also one of eight Latinos playing the 1965 All-Star Game held in Minneapolis, where San Francisco Giants pitcher Juan Marichal was the MVP.  Marichal would go on to have a more eventful summer.

In flipping through these cards, you realize that in blindly buying a lot online, the cards are not always going to be Latino superstars, and that’s okay.  I think the common Latino player is just as interesting with his own story to tell.  Those guys deserve our attention as well, and I am going to enjoy collecting their cards just as much.

One thought on “Latino Commons in a 1965 Topps Card Lot”