I had planned on writing a full blown story about one of my favorite sets–1970 Topps–but I decided instead to just write about a single aspect of those cards: their “candid” (kinda, sorta) photography.

You are likely aware that Topps first used action photography on their base players cards in 1971. Some were great, others less so. Before that year, other than special subsets–World Series cards, record breakers–all player cards were posed.

What were these poses? Nearly all of them were either (a) head shots, or (b) photos showing the player pitching, batting or fielding. If you were an odd kid like me you could sort your cards by “pose type”. One of my personal favorites were catchers in their crouch getting ready to receive a pitch–usually squatting in some random spot, perhaps facing the stands with the field behind them. Sometimes the catcher had shin guards, though usually not.

In 1970 Topps took their first step toward the candid photography that would soon dominate its set. Candid photos might occur when a photographer wanders around and finds players hanging out and snaps away. For example, to get this shot of Henry Aaron the shutterbug likely walked past the dugout and said, “Hey Hank!” Aaron looks up, “click.”

Is this actually how it went down? No way to know, but its hard to imagine the camera guy, or Aaron, deciding on this pose. Either way, it was a breath of fresh air at the time.
Lou Brock is looking rather casual here, performing an Ichiro like back stretch using his bat. Hey Lou, ‘sup? 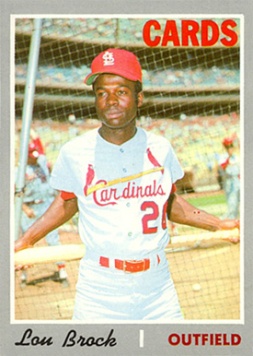 The most candid shot in the set was a card that would look at home a decade later, showing Bud Harrelson signing for the hometown fans. For kids of 1970, Harrelson might as well have been streaking across the infield for the shock of it all. Where is a his glove? His bat?

A related, though less risque, example is this gorgeous card of Harmon Killebrew, standing near the bat rack, picking out a bat, looking askance. Perhaps not totally candid, but one can imagine the lensman saying, “just act natural, Killer. Sure, keep the towel.”

By itself, this card is interesting. What makes it more interesting that Topps had no fewer than nine (9) cards that year of guys standing near the bat rack, a structure that had barely ever shown up a card before.
Interesting exceptions: the 1961 and 1962 Wes Covington cards.

In the first series in 1970 (cards 1-132) there were two such cards — one of Gerry Moses, and this one below of Juan Rios. When I first laid eyes on the Rios I had likely never seen a real bat rack before–I was playing Little League by this time, but we just tossed our bats in a pile. The Royals were obviously a pretty high class organization.

Incidentally, Juan might have chosen his bats a little more carefully–he hit .224 as a rookie in 1969 and never played in the majors again.
Here is a pretty sweet card of Coco Laboy looking for some lumber. In his case, the impact of the high-class bright red bat rack is somewhat mitigated by the chain link fence. Where is this place?

But for the true low-rent district, look no further than Del Unser, who looks undecided on his bat choice.

The Senators only had a couple of seasons left before heading for Texas. Perhaps we should have seen their financial troubles coming, given that they were storing their bats in what looks like a grocery store shopping cart.