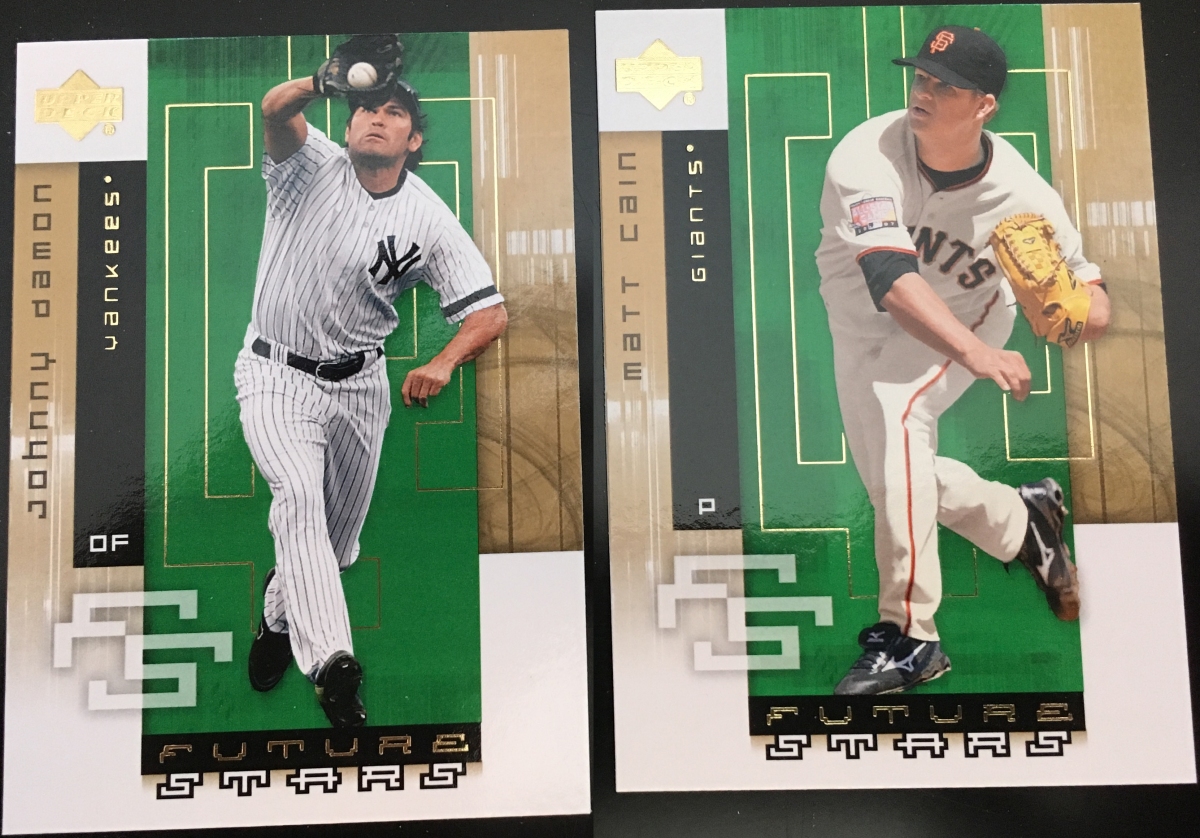 They say you can’t predict baseball, and the folks who make baseball cards surely agree. Off and on for the past several decades, Topps has made a practice of predicting which players would be future stars and slapping the “Future Stars” label right on the cards. Sometimes they do a pretty good job — Cal Ripken and Tim Raines are among the Future Stars who became Hall of Famers — and sometimes they don’t — just ask Bob Bonner, Jeff Schneider, Roberto Ramos, and Bobby Pate, the four guys who shared those Future Stars cards with Ripken and Raines.

The same year that Topps nailed it with Gary Sheffield and (to a lesser extent) Sandy Alomar Jr., they also dubbed Steve Searcy and Mike Harkey as Future Stars. I’ll see your 1987 Bo Jackson and raise you Tim Pyznarski.

So anyway, the point is that predicting which baseball players will become stars in the future is a losing game. That’s why I have so much respect for Upper Deck, who in the mid-2000s made a bold decision: If the Future Stars hardly ever turn into “Stars,” they reasoned (I assume), then why are we so beholden to the “Future” part of the equation?

I won’t go through the entire checklist, but let’s highlight a few of the players who, in 2007, Upper Deck was willing to go out on a limb and predict stardom for, along with their career accomplishments before they were named Future Stars.

Miguel Tejada. Age 32. Winner of the 2002 American League Most Valuable Player Award. Four-time All-Star, two-time Silver Slugger, and receiver of MVP votes in each of the previous seven seasons.

Okay, this is just getting tedious at this point. Others in the set include John Smoltz, David Ortiz, Curt Schilling, Jim Thome, Ivan Rodriguez, Gary Sheffield, Derek Jeter, Alex Rodriguez, Mike Piazza, and Greg Maddux, among (many) others.

I’m sure there was some rhyme and/or reason to this set. They did a similar set the year before, and they obviously didn’t think they were actually fooling anyone. I’ve looked at several of the cards, trying to find a wink or a nod or some indication that they’re messing with us, but it’s not on the cards themselves. There doesn’t appear to be any “throwback” aspect to the set — Johnny Damon is pictured as a Yankee, Griffey as a Red, Sheffield as a Tiger, etc.

It can’t possibly be true, but it seems, at least to the eye of the casual observer who happens to come across some of these cards ten years later, as if Upper Deck just really wanted to make sure their Future Stars set included some actual stars.

To be fair to Upper Deck, the set also included several players you would traditionally find in a Future Stars set. You know, rising stars like Mike Schultz, Sean Henn, and Jamie Vermilyea. For every Andrew Miller or Ryan Braun, you have a Rocky Cherry or an Other Ryan Braun.

Once you get past the first 100 cards, most of which feature established stars, there’s the usual hit-and-miss assortment you’ve come to expect from Future Stars sets. And now Zack Segovia and Devern Hansack will be able to tell their grandkids they were in the same set as Greg Maddux and Derek Jeter.

Jeff J. Snider is editor-in-chief at Baseball Essential. He grew up in Southern California as a Dodger fan, and now he lives in the barren wasteland (baseballishly speaking) of Utah, where he is raising a family of Dodger fans surrounded by NBA and college football fans. You can follow him on Twitter at @snidog. View all posts by Jeff J. Snider