During the 1960s and ‘70s Topps included manager cards for each team. I’ve always enjoyed these cards due in part to the staged shots which made the skipper appear to be in the act of managing his charges.    A typical pose had the manager with his hands behind his back as if surveying the practice field.  Also several cards depicted a manager putting his hand to the mouth to create the illusion of barking out orders.  Another frequent tactic was having him point as if giving directions to the players on the field.  In addition many shots featured the manager poised on the dugout steps or near a batting cage.   Some shots had the manager appear to be giving signs.  Let’s examine a few of these classic poses by focusing on some iconic field generals.

Best known for piloting the 1964 Phillies to an epic collapse, Gene Mauch had a long managerial career with stints in Philadelphia, Montreal, Minnesota and California.  The 1968 card (left) is a classic example of the shouting out orders pose.  Perhaps he is telling Richie Allen to stop writing obscenities with his foot in the Connie Mack Stadium infield dirt.  In 1967 Gene is pictured at the batting cage.  Hopefully, batting practice wasn’t in session since he is standing in front of the cage.  1970 finds the Expos manager pointing not toward the field but at the Shea Stadium seats.  Is he signaling for the hot dog vendor?  Is he pointing out a plane taking off from LaGuardia?  Finally, the 1966 card has him posed apparently in the dugout.  But what is Gene holding?  Is it a jacket draped over a seat?  Is it a seat cushion?  What is with the strip of tape? 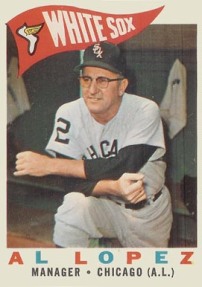 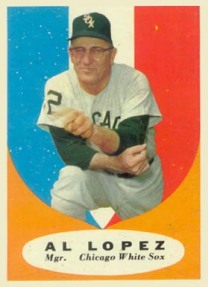 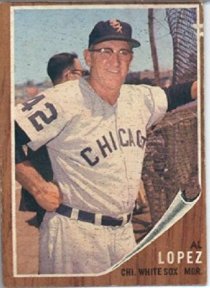 The Al Lopez cards of the 1960s had all the classic poses.  Lopez was the manager who twice interrupted the Yankees pennant run with flags in 1954 with Cleveland and 1959 with the White Sox.  The 1960 version (left) has Al on the top step of the dugout while the 1961 shot has him pointing.  Al is behind the Yankee Stadium batting cage in 1962 and hollering commands in the 1965 image.

Leo Durocher’s long and colorful career culminated in the early 1970s.  His stewardship of the Cubs during the 1969 collapse in face of the Mets onslaught will forever be remembered in Chicago.  The 1970 Durocher finds him in the often used hands behind the back pose before a game at Shea Stadium.  I had to include the 1973 Astros shot since it is a prime example of airbrushing gone horrible wrong.  Topps’ art school drop outs provided Leo with a poorly rendered orange lid and windbreaker collar.

This 1972 Walt Alston is a perplexing pose as he points skyward. Is a foul popup coming his way?  Alston always appeared to be 20 years older than his actual age.  He is 60 in this picture but looks ready for the “old managers” home. 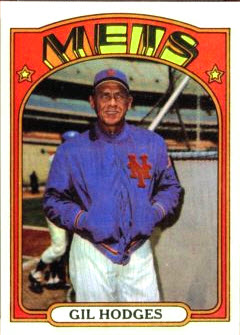 Here we have two Mets legends, Casey Stengel and Gil Hodges, resplendent in Mets jackets.  The “Old Perfessor” is pontificating on the top step of the Polo Grounds dugout in this 1965 card.  Gil stands behind the batting cage on a sunny day in Queens for this 1972 card.  Tragically, Gil died of a heart attack during spring training in that year.  I had to include this great 1970 shot of Luman Harris who led the Braves against the Mets in the first National League Championship Series in 1969. The Braves jacket is a satin beauty.

I will conclude with this 1964 Alvin Dark apparently giving the indicator to his coach as he exudes authority with an imperious gaze.  Al’s bench career would see him lose in a classic seven game World Series to the Yankees in 1962 but win the championship with Oakland in 1974.