The 1887 Kalamazoo Bats card set contains somewhere around 60 cards consisting of team photos, portrait style photos, outdoor photos, sliding, trees, and more sliding and trees. Since we don’t see a lot of 19th cards getting that much exposure here, I thought I’d introduce you to some of my favorite Kalamazoo Bats. 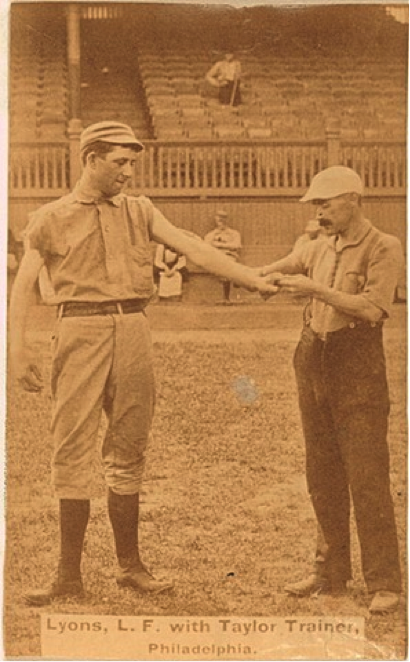 Outfielder Harry Lyons is getting checked out by the trainer. What other card set would have the trainer get equal billing? Billy Taylor was probably the local vet just back from delivering a litter of puppies. “Your paw…..I mean …..your hand looks fine, probably just one broken bone. Now get out there and play.” 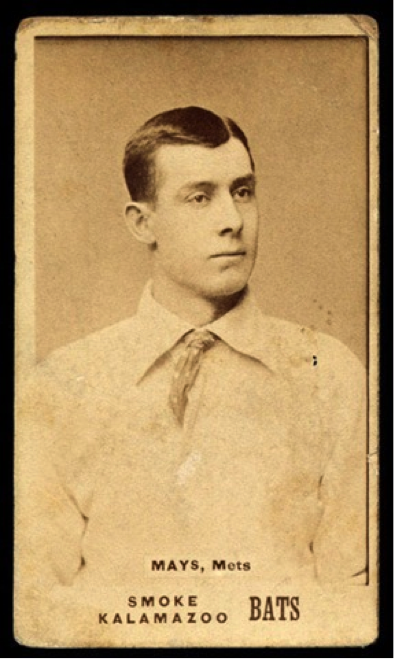 This is Metropolitan pitcher Al Mays. There are several sit down portrait studio type cards in this set. All players have the same proud look on their face, and many are wearing ties. None, however are leaning into a mirror while worshiping their reflection, a la A-Rod. 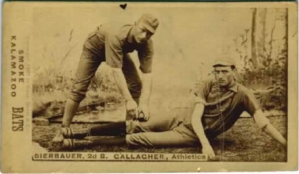 Lou Bierbauer tags out a player that might be Jim Gallagher. He is the only Gallagher, that I could find, that played baseball around 1886/1887 listed in the Baseball Encyclopedia. He played just one game with Washington, getting 1 hit, in 1886.   If it is in fact Jim Gallagher he is buried in Hyde Park Cemetery in Scranton, Pa. just 3 miles from where I sit. Like many of the Kalamazoo cards, this one featured sliding, and was taken outdoors with a canvas backdrop that included trees, lots of trees. 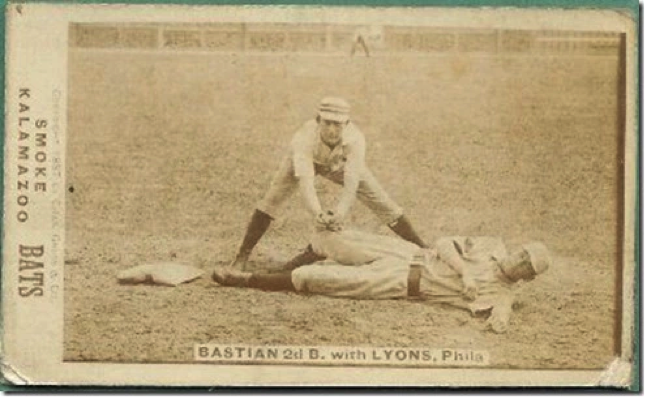 More sliding, but where are the trees? I need more trees in here!!!. Charlie Bastian puts the tag on Harry Lyons. And, as in all the Kalamazoo Bats cards, the runner is clearly out. Although the umpire in the background is totally out of position to make the right call. 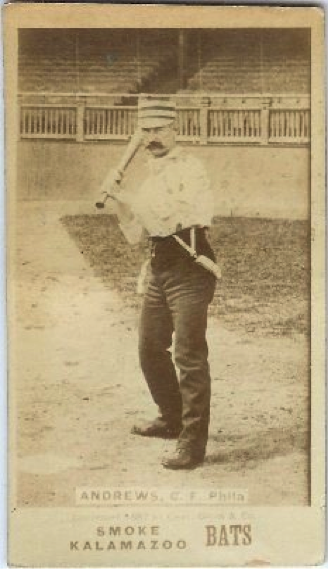 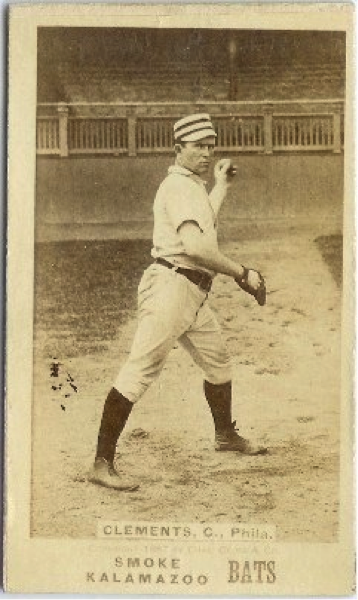 Hey, this is 1887, there’s no gloves in baseball! By 1887 catchers were regularly using some type of glove to protect their hands. And yes, this hard throwing lefty was a catcher. Jack Clements caught in 1076 games, and was the last regular southpaw catcher in the game. Clements throwing style is reminiscent of my attempts to throw left-handed. Uncoordinated. His complete lack of athletic style may be the reason lefties no longer catch. Hmm?……there’s something wrong with this card. I can’t quite put my finger on it……oh…..I know……..Henry Larkin has his name misspelled……..No……that’s not it……..there’s not enough trees……..no…….what could it be? Jocko Milligan and Henry Larkin are clearly giving their all to sell this very close play at the plate, but the photographer has gone a different way, both artistically and mentally. The wooden beams supporting the canvas, and the concrete wall in the background, at least from my perspective, do not add to the overall baseball ambience. I wonder what Jocko and Henry said when they saw this disaster. This card has sold at auction for over $17,000.00. So maybe the photographer actually knew what he was doing. 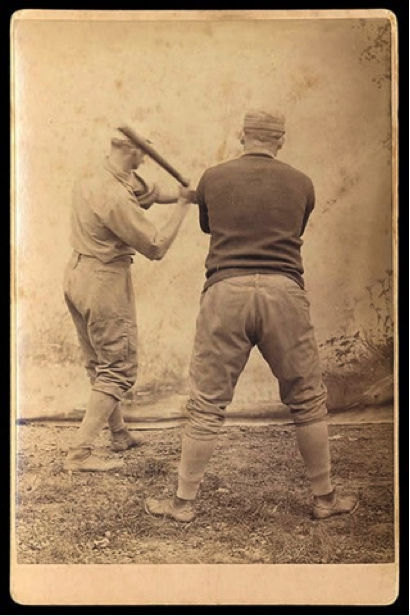 Do these pants make my ass look fat? This card features Jocko Milligan at catcher and Harry Stovey hitting. This photograph was obviously taken by the same photographer of the previous card. I can hear him now, “Trust me Jocko, you won’t look stupid, I am an artiste.” Harry’s just waiting for the ball to come busting through the background canvas at any second. 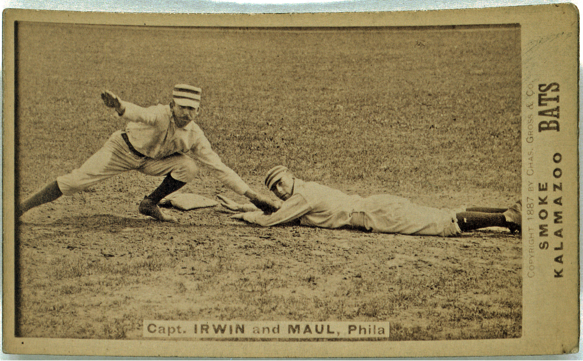 Al Maul is clearly tagged out by Arthur Irwin. Irwin seems to be signaling Maul safe, while Maul has that look on his face that seems to say, “Can I be safe just one time?!” 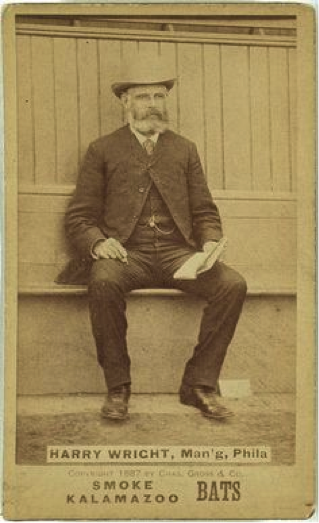 What a great card of a great Baseball Pioneer. I wish I owned this one.