There are many players in baseball history who shared the same name. Not quite as common are identically named men being active at the same time. Here is look at some of the “same name” players who, for at least one year, had cards in the same set.

Perhaps the most famous example are the two Bob Millers who played for the original ’62 Mets. Bob L. Miller (on the left) was the Mets #1 expansion draft pick from St. Louis. He would play for 10 different teams in a career that stretched into the ‘70s. Bob G. Miller was on the way out when he joined the first year Mets. His stint at the Polo Grounds would mark the end of his mediocre career. Using Retrosheet I was able to find at least three instances where they both pitched in the same game. Incidentally, Bob G. came over from the Reds in a May ‘62 deal for Don Zimmer. This resulted in Don Zimmer’s ’62 card having him pictured as a Met but on the Reds.

The oldest two-name examples I found were ’22 Exhibit Supply Co. cards for the two George Burns. Both Georges were excellent players in the early 20th Century. First baseman George H. Burns had a stellar 16 year career highlighted by winning the 1926 AL MVP for Cleveland. I found out after reading Joseph Wancho’s SABR BioProject piece that his post-baseball career was sheriff’s deputy for King Country, Washington where I live. George J. Burns played outfield for John McGraw’s Giants from ’11-’16 before being traded to the Reds after the ’22 season. His solid 15 year career included leading the NL in runs scored five times and stolen bases twice. R. J. Lesch’s BioProject entry is very informative. As far as I can determine, neither man had a wife named Gracie Allen. 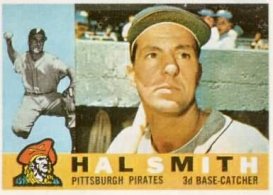 The fact that both Hal Smiths played catcher undoubtedly led to some confusion. Hal W. Smith played for five teams in a career lasting 10 years. His home run in the 8th inning of the 1960 Worlds Series put the Pirates ahead, only to see the Yankees tie it in the top of the ninth. Hal could have been the hero instead of Mazeroski. Hal R. Smith was mainstay with the Cardinals from ’56-’61. He resurfaced for a few games with the Giants in ’65.

If that pair of Smiths wasn’t confusing enough, there were two pitchers named Bob Smith in the late ‘50s. Bob G. had a six year career with five teams. Bob W. Smith played for three clubs in the span of his two years in the “bigs.” Coincidently, both broke in with the Red Sox.

1971 saw cards for two Frank Bakers. Outfielder Frank Baker Jr. played for Cleveland in total of 125 games in ’69 and ’71. Infielder Frank W. Baker came up with the Yankees in ’70 and finished up with Baltimore in ’74 having played a total of 146 games.

In ‘72 the Padres selected Dave W. Roberts, from the University of Oregon, #1 overall in the amateur draft. He replaced Dave A. Roberts who they traded to Houston after the ’71 season. Dave W. never came close to living up to his lofty draft position. He never developed into a major league catcher and struggled to find a position with three teams. Dave A. Roberts was a decent pitcher for eight teams from ’69-’81. His best year was ‘73 when he won 17 games as an Astro.

These two 1991 Donruss cards proves the existence of another pitcher named Kevin Brown. Kevin D. Brown pitched for three teams from ’90-92 racking up three victories. Kevin J. Brown was one of the most prominent pitchers of the ‘90s totaling 211 career wins. He was a key part of the ’97 Florida Marlins championship and helped San Diego reach the World Series in ’98.

Greg A. Harris and Greg W. Harris are pictured here in ’90. Greg A. had a 15 year stint in the majors with eight teams winning 74 games. Greg W. pitched for eight years primarily with San Diego notching 45 victories. 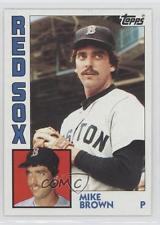 Mike G. Brown was part of a trade deadline deal in 1986 between Seattle and Boston which sent Dave Henderson east. Red Sox fans fondly remember “Hendu’s” post-season heroics that year. Mike G. didn’t fare so well in Seattle closing out his career in ’87 with a total of 12 MLB wins. Outfielder Mike C. Brown had a similarly lackluster career with the Pirates and Angels form ’83-’86.

The two Pat Kelly’s had cards in 1980. Outfielder Pat Kelly had a 15 year career and was an original KC Royal in ‘69. His speed on the base paths made him a valuable asset to the White Sox and Orioles as well. He is the brother of ‘60s-‘70s Cleveland Browns running back Leroy Kelly. Dale Patrick “Pat” Kelly had a “cup of coffee” with the Blue Jays in 1980. He appeared in only three games before becoming a long tenured, minor league manager. 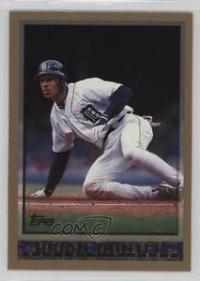 Personally, the two most confusing “same name” players are the Brian Hunters. Both players’ careers spanned roughly the same era and each had a stint the Mariners, my home team, in the ‘90s. Brian R. started with the Braves in ’91 and then bounced around for the better part of a decade playing outfield and first base for six different teams. Brian L. was a speedy outfielder for seven teams between ’94 and ’03.

The great Pirates catcher Tony Pena’s son Tony F. Pena Jr. was a shortstop for Boston and KC from ’06-’09. He was the Royals starter in ’07 but didn’t see sustained success. Breaking in the same years was Ramon Antonio Pena a pitcher. This Tony started with Arizona and “hung them up” after the’11 season with the White Sox. 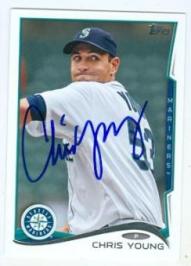 A basketball player at Princeton, 6’10’ Chris R. Young chose baseball and has put together a 12 year career with five teams. He won 12 games twice and has total of 79 from ’04-’16. Chris B. Young has played for five teams as well from ’06-’16. As a starter for Arizona in ‘10, he had 91 RBI. According to Baseball Reference, the two have never faced each other. 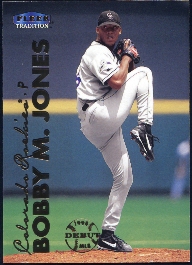 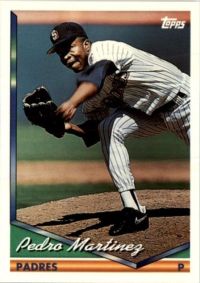 To say the career of Pedro (Aquino) Martinez’s career was over-shadowed is a gross understatement. He toiled for 4 teams from ’93-’97 accruing seven wins. Hall-of-Famer Pedro Martinez finished with 219 wins.

Playing primarily with the Marlins, shortstop Alex Gonzales was a solid performer for 16 seasons from ’98-’14. He was an All-Star in ’99 and finished with lifetime average of .290. His contemporary, Alex S. Gonzalez played from ’94-’06 with six teams. 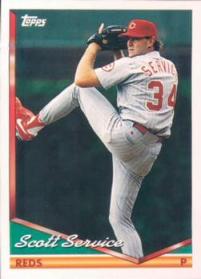 I will conclude with players with the same pronunciation of their names but different spellings. Scott Servais and Scott Service played concurrently as did Lee May and Lee Maye.

If you know of other cards, please let us know in the comments or on Twitter.

14 thoughts on “Its Miller Times Two”