I don’t like surprises (it’s a control thing) and I dread being handed a wrapped present. I like three general things – books, records and, of course, cards. It’s impossible to me to fake pleasant astonishment at a gift that, without a doubt, will leave me cold. “I always wanted an old mug from Howe Caverns!” Can’t do it. Keep that in mind for my next birthday. Yet I love packs and I love them because of the surprise. They’re wonderful little birthday presents, paper (or wax) itching to be ripped open.

It’s all about expectations, those being predictably met and those being delightfully unforeseen. Clearly I’ll love whatever is inside. I spoke about Split Season: 1981 last week before a group of guys celebrating the 25th anniversary of their fantasy league, Seasons Past. I got some solid swag, including three packs of 1981 Donruss (well played!). There was nothing new to be found there, I have the set, but peeling away the paper, chiseling away the gum (poor Dave Chalk!) and finding Tim Foli, Mitchell Page, Rick Wise and others, was a hell of a lot of fun.

Back to expectations. The thing about new packs (as opposed to 36-year-old packs) is that there’s usually going to be something wondrous to be found. I’m not talking about the quasi-thrill of an insert, though I’ll admit to being jazzed when I pulled an autographed Aaron Judge card out of a pack of 2017 Gypsy Queen, which I then sold on eBay, figuring it was best to sell something like that early and high. That was around 5 homers ago. It’s not turning out to be a good call.

I’m talking about this: when Roberto Clemente died on December 31, 1972, that was it for his career. He was gone. Then I opened a pack of 1973 1st series, and there he was, Roberto Clemente, completely alive, at bat and ready to pounce. It was a shock, incredibly unexpected. I’ll never forget it. 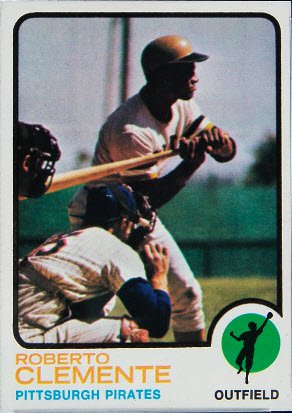 Or the following year, 1974, when early packs revealed a spectacular #1 – Hank Aaron, “New All-Time Home Run King.” What a jolt to the senses compared to the other 1974’s, though that is my favorite set of the ‘70’s. Though Aaron entered 1974 one shy of tying Babe Ruth’s record of 714 career homers, and more than likely to break the record early (he did it on April 8), it was still ballsy for Topps to proclaim him the new king on a card. As Clemente showed the year before, no one, not even Bad Henry, was guaranteed another season in life. It was totally startling to see that card #1. 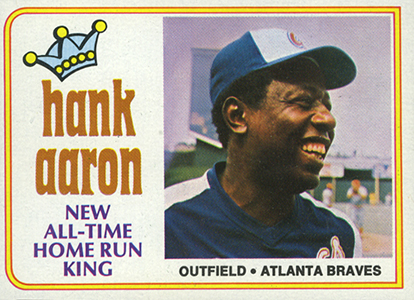 I’m finding that stacks of cards, small piles I’ve been buying to work on sets, provide the same kick of unopened packs. When I buy a lot of cards, I hone in on the numbers, comparing them to my checklist. Once they’re delivered, I take a closer look at the fronts.

Bouton56 wrote a post last month. “It’s Miller Times Two” is a fun look at players with the same names in the same set. A recent stack of 1960’s that I bought brought an unanticipated bombshell.

This is not Johnny Briggs:

This is Johnny Briggs:

I was kind of bowled over by white Johnny Briggs. I do know a lot of baseball, but I never heard of this guy. Well, I’d heard of him, but not this version of him. I only know black Johnny Briggs. When I was out to dinner with two older friends, writers and baseball card collectors, I told them this minor story about expectations and how often they can be shaken up.

“Oh, Johnny Briggs, the pitcher?” one of them asked. They identified with that one!

That’s the magic in the packs and stacks. There’s going to be something you didn’t know, or hadn’t seen, or comes out of left field, or goes out to center field, like Addison Russell’s Game 6 Grand Slam, a game I was at and was ecstatic to pull out of a pack this year.