My previous post on Seattle Rainiers and Angels popcorn cards from the ‘50s and ‘60s omitted a unique promotion that allowed kids to trade the popcorn cards for photos. Much to the chagrin of modern collectors, this exchange unintentionally created a scarcity of high grade cards from certain years. 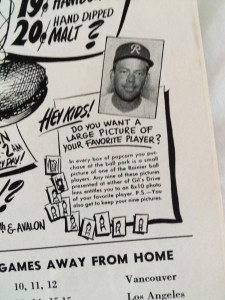 From ’56-’58 a local drive-in chain (Gil’s) and grocery store (Ralph’s Thriftway) sponsored the card exchange promotion. The merchants gave away an 8X10 glossy photo–identical to the card or a full version of the cropped card shot–in exchanged for nine popcorn cards. The accompanying ad from a 1956 Rainiers program whetted kids’ appetites for popcorn and the card swap. Former major league star Vern Stephens is featured in the ad.

These Bobby Balcena and Bill Glynn cards and photos are examples of the exchange. By the way, Balcena was the first Filipino-American to play in MLB. He had a “cup of coffee” with the Reds in ’56. Glynn played for the Phillies and Indians in the late ‘40s and early ‘50s.

Employees at Ralph’s and Gil’s would stamp, punch or mark the cards before returning them to the kids in order to prevent them from presenting the same cards to get additional photos.   The Vic Lombardi card shows both a stamp and mark. Note the ad promoting the card/photo exchange on the backs. Lombardi was in the starting rotation of Brooklyn Dodgers in the late ‘40s. He started and lost game two of the ’47 World Series. The Milt Smith card shows a hole punched by a “soda jerk” at Gil’s. Milt had a brief stint with the Reds in ’55.

I will conclude this “corny” narrative with a player whose off season job was atypical for a “jock.” Eddie “Fiddler” Basinski was Brooklyn’s starting shortstop during the war year of 1945. With the return of the regulars from the war effort, Eddie took up residence with the Portland Beavers of the PCL for 11 seasons. He played for the Rainiers in ’57 and ’58. After the season, Eddie returned home to Buffalo where he was a violinist in the Buffalo Symphony.