The ‘70s and early ‘80s saw a sartorial explosion of color in Major League Baseball. The Astros “Tequila Sunrise” jersey and the Padres various brown, yellow and orange togs are the gaudiest examples. This movement from home whites and road grays was not exclusive to the “bigs;” the minor leagues saw a similar profusion of color.

In addition to decades’ worth of Mariners farm team cards, I have accumulated many other minor league sets. Recently while browsing through a binder of late ‘70s and early ’80 Pacific Coast League cards, I was assaulted with some true “retina burners.” Here’s a look at some seriously questionable uniform designs.

This ’80 TCMA Tucson Toros card show the most egregious example of “double-knit” debauchery. Obviously, the Toros were inspired by the Astros but went too far. The desert earth tones, diagonal lettering and orange base add up to a real mess. The caps only make the outfit worse. Supposedly, the colors would “run” when laundered, making for an even more psychedelic effect. 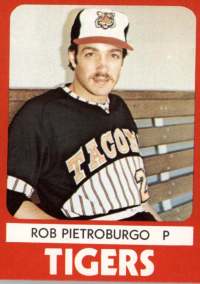 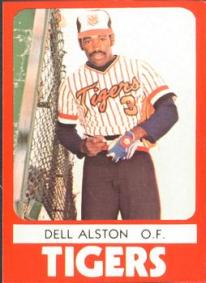 Not to be out done by Tucson, the Tacoma Tigers created a “dog’s breakfast” design as well. These ’80 TcMA cards show two hideous combinations. I know all too well that eight months of gloomy, Pacific Northwest weather can do strange things to the mind, but what were they thinking?! 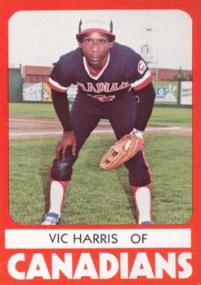 Tacoma’s Canadian brethren to the north got into the uniform perversion act as well. The Vancouver Canadians sported these mono-chrome Navy “jobs” in this ‘80 TCMA. 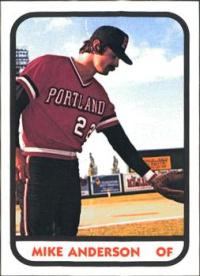 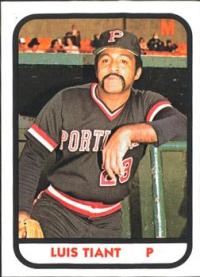 The other Northwest entry, Portland, went nuts as well. These ’81 Beavers cards show the mix-and-match style popularized by the Pirates. In ’81, Luis Tiant signed with the Pirates but spent most of the year at AAA Portland where he tossed a no hitter. 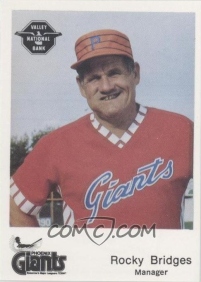 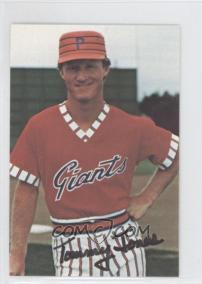 Phoenix Giants donned this forgettable ensemble in ’82. Not even the signature “chaw” in his cheek could make Rocky Bridges look anything else but ridiculous in these “babies.” The “pill box” caps are the perfect accessory to this abomination. This ’81 Tommy Jones shows the uniform in its full glory. 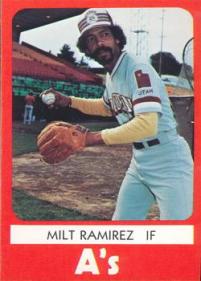 The ’80 Ogden, Utah A’s had fairly staid uniforms, but what’s up with the cap? It would be more appropriate on the head of a trucker. The yellow undershirt from the parent club worn by Milt Ramirez doesn’t quite match the overall color scheme. Like many of the TCMA cards of this era, this photo was taken at Tacoma’s Cheney Stadium. 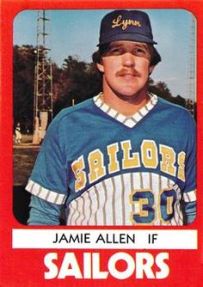 Lastly, I switch to the Eastern League to present this ’80 TCMA Lynn Sailors card of future Mariner Jamie Allen. The uniform manufacturer somehow sold the same awful design worn by Tacoma to the Sailors management as well.

3 thoughts on “The Wild, Wild West”