Father’s Day is nearing and it got me thinking of baseball dads & sons who are on cardboard. 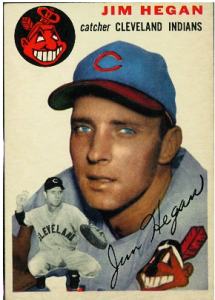 As I mentioned last week, in preparation for the SABR 47 Jim Bouton panel, I recently reread “Ball Four”. One of the entries that reminded me of a Baseball card occurred on March 28th. The subject of the passage is Pilots outfielder Mike Hegan, who is a recurring character throughout the book. 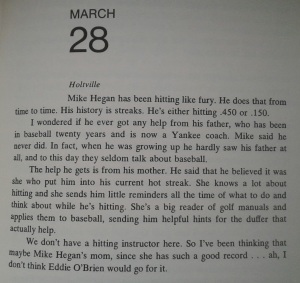 The paragraph is interesting for several reasons. The connections between golf and baseball are pretty strong. Just last week Tim Jenkins mentioned that Hawk Harrelson retired from baseball to pursue a professional golf career. There are also several stories of mothers helping sons learn the game, and they are often noteworthy. But, to me, the most interesting portion relates to Mike Hegan’s father Jim. I knew Mike’s father played baseball because in 1976 at the heart of the collecting days of my youth Topps dropped a Father and Son subset. 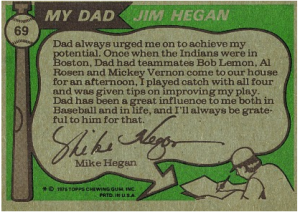 I want to start with the B-Side of this card because this continues the discussion of Mike Hegan’s parents. The text regarding Jim Hegan that is credited to Mike does mention his father being a great influence, however the younger Hegan is also careful to note that this is not just in baseball but in life as well. When Mike actually does mention getting tips on the game of baseball it is only in the context of other players including Hall of Famer Bob Lemon. Perhaps I am reading too much into this but this version of Mike Hegan does correlate with the observations of Ball Four. Jim Hegan was a Ballplayer but didn’t stress baseball at home. If there was an baseball influence there it came from elsewhere – quite likely Mikes mother Clare. 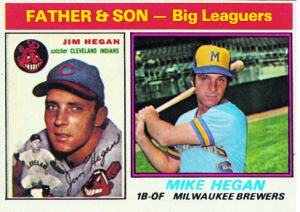 A real nice design for these cards, the vintage card of the father balanced with a contemporary photo of the current player is a perfect balance for the subset theme.

1976 is the third consecutive year that Topps included a subset that featured insets of earlier cards on a current card. In 1974 Topps the Hank Aaron Subset which leads off flagship includes several cards with four-up panels of Topps cards from the new Home Run King’s career. The following year 1975 Topps featured the 24 card MVP subset which will always be one of my favorites.

The 1976 Father&Son subset consist of 5 Cards that run from #66-#70. Two of the cards belong to families that would feature a third generation of MLB players and both of these cards have Phillies ties. First is Ray and Bob Boone (#67) who of course are related to Bret and Aaron Boone. The other is #66 Gus and Buddy Bell, and we know that David spent a few forgettable years with the Phillies. The other two cards feature the Sr./Jr. combos of Roy Smalleys and Joe Colemans. 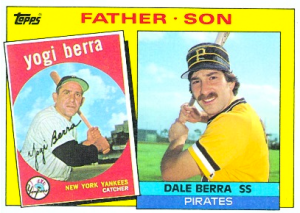 Topps returned to the Father-Sons in 1985 with a 13 card subset. The Boones, Bells and Smalleys all made the cut for the second round. Other notables include SABR 47 Panel Subject Yogi Berra with son Dale, Tito and Terry Francona, and SABR 45 (Chicago) guest panelist Steve Trout with his father Dizzy.

One of the guests scheduled for the Yogi Berra Panel is journalist Lindsay Berra who is the granddaughter of Yogi and Niece of Dale Berra. Her father Larry played minor league baseball in the Mets organization.