1987 was my first full year as a baseball fan. After attending my first Giants game in 1986, despite the ridiculousness of the game—16-innings including the Giants using pitchers as outfielders and switching them between left and right field depending on the batters’ platoon splits—I ended up a hard core Giants fan the following year. That the Giants were actually good for the first time in anyone’s memory certainly helped. As did the fact that 1987 was also the year I got bitten bigtime by the baseball card bug.

That fall when the Giants won the Western Division* my local paper, The San Jose Mercury News, celebrated by printing cartoony baseball “cards” of the entire team on the back page of the sports section. It was a pretty silly thing. Cheap newsprint. The card backs were just whatever was on the previous page of the newspaper. But I was undeterred.

*30 years later I still instinctually think of the Reds, Astros, and Braves as the Giants’ rivals even though they’re no longer in the same division nor, in the Astos’ case, the same league.

I scrounged some old vertical file folders from my parents, brushed on glue, and carefully laid the newspaper onto cardstock. I still remember carefully brushing the bubbles out before the glue dried. Later in the day once the glue had dried, I busted out my scissors and turned that cheap newsprint into real cards.

30 years later and I’m a bit surprised that these are in as good shape as are. Yes, of course I kept these in binders. But newsprint isn’t the most archival of materials and there was no guarantee I’d selected an appropriate glue. I probably just grabbed a bottle of Elmer’s but it’s not like I knew what I was doing when I was nine. 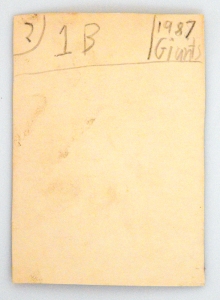 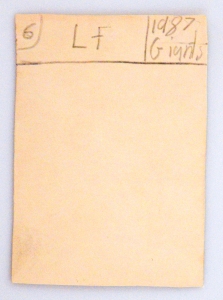 The best part of these cards is the backs though. Besides being woefully uncreative—I had, after all, only been collecting cards for under a year—it’s an interesting snapshot into what I felt was important on a card back at the time. Yes, I also remember being fascinated with all the statistics but that would’ve been outside of my lettering ability at the time. But I felt very strongly about knowing a player’s position and recording the team/year information that the card represents.

It’s also very clear that I believed that a baseball card should be part of a numbered set. I have no idea how I chose to number these, but not only did I number them, that’s the order I sleeved them in my album. 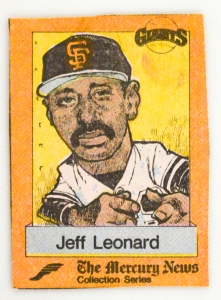 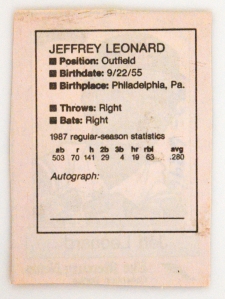 I was apparently not the only burgeoning baseball card collector who received The Merc at home. These cards got such a reception that a few days later they reappeared on the back of the sports page—this time in color and with proper backs. Or, well, sort of proper backs. It looks like something produced by a newspaper whose priorities are creating readable copy using the existing house style. I do however love the optimism of including a line for autographs. Even today I don’t know what pen I’d choose for that task.

Anyway, I went ahead and turned the new series into cards too. Same method only I had to both procure a second copy of the paper and figure out how to register the two sides for gluing.

I wish I could remember how I accomplished the registration. 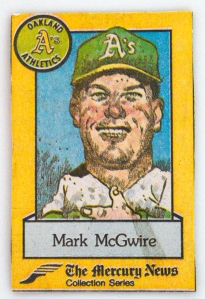 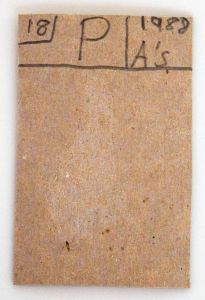 The following year when the A’s won their first pennant in over a decade The Merc celebrated the same way. This time though the cards were oversize—closer to the pre-1957 Topps size—and, while they were printed in color the first time around, they never got any backs.

So, as someone whose first exposure to cards the late 1980s with backs that stayed the same year after year, I went ahead and used the same template for my hand-pencilled backs that I’d used the previous year.

Productionwise though I no longer used vertical files. My parents encouraged me to find a cheaper source of card stock so these are, I think, on reclaimed cereal boxes. This resulted in way thicker cards and produced the nice side benefit of encouraging me to use a paper cutter instead of scissors. Where the 1987 cards have all janky hand-cut edges, these 1988s are nice and square.

Alas, The Mercury News never made any more cards. The following year’s Bay Bridge Series had plenty of other things for them to print commemorative back pages of and by the time the Giants returned to the World Series in 2002 the baseball card bubble had imploded. But I’m happy these were around right at the beginning of my collecting and I love rediscovering them both in how they’ve survived and how they suggest possible projects for my sons to try as they flirt with the hobby.

7 thoughts on “Rolling my own”