Most collectors have a cringe inducing story surrounding the desecration of cards or related products during their youth. A classic example is Jeff Katz gluing ’71 coins onto a board. Of course cards were designed to provide fun and entertainment for kids. At the time, the alterations we made brought us joy. However, I was enough of a collector as a kid to only mess with duplicates. The following is a tale of desecrating a ’69 Pete Rose card-amongst many others-in the pursuit of fun.

Parker Brothers produced a board game called “Pro Draft,” which utilized ’73 Topps football cards. I very much coveted this game but never obtained it. Being a clever lad, I decided to create my own game using baseball cards. I called the game “Free Agent Draft.” My best guess is I created it in ‘75 after the Messersmith/McNally case resulted in free agency.

Borrowing liberally from the rules of Monopoly, I crafted a board game where the first player to obtain a card for each positon–plus a manager–would be the winner. The players had different values, much like the properties in Monopoly. Drawing from my vast number of duplicates, I proceeded to write dollar values, ranging from 50 to 500, on the front of cards. This resulted in not only Pete Rose being defaced but Luis Aparicio, Boog Powell and Bill Mazeroski as well.

My “Monopoly like” board had spaces for drafting players, winning or losing money, being forced to trade a player or pay opponents fees. I had a “Community Chest/Chance” space called “Hit or Error” resulting in good or bad outcomes depending on which card was drawn. Examples included: “3 game winning streak: move forward 3 spaces” and “Pay $100 to pension fund.” 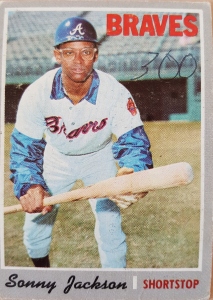 Competitors could raise money by placing players on “waivers,” receiving half value from the bank. An opponent could put in a waiver claim if you couldn’t meet your financial obligations. Obviously, I stole this from the mortgage option in Monopoly.

Participants could purchase multiple players for the same position in an attempt to block opponents from filling out a team. Conversely, you could take a player you needed if you landed on a “trade” space.

Initially, I drew the game board-poorly- on the back of a roll of Christmas paper and glued it to a checker board. Later, the board was significantly improved by my buddy, Ted, utilizing a piece of plywood and etching the spaces with a wood burner tool. We even varnished it.

Since we played this game for hours, it must have been somewhat compelling. I remember having to alter the rules several times since flaws would creep up. Eventually, we nailed down a fun game.

During a furnace installation in my grandparent’s basement, the board and the “Hit or Error” cards disappeared. I saved some of the adulterated baseball cards, which you are viewing.

If I had sold this concept to Parker Brother or Milton Bradley–not the player–I might have made a fortune. Alas, I’m sure copyright infringement would have been an issue.

I also created a game called “Jenk-o-Matic” baseball, but that is a topic for another post.