When I got back into baseball cards this year I had many things to get used to. The better-quality printing and photography. The commitment to all action. The thousands of parallels and short prints and set releases and inserts to either be aware of—even if it’s so I know to ignore them. One thing I didn’t note was the change to the Indians logo.

The DeChief movement has been going on for a few years now and I know that MLB has demoted Wahoo in favor of the block C. So it didn’t jump out at me to see that Topps was using the block C as the logo on its 2017 flagship set. It made sense with the general trend of things and I didn’t think any further about it.

It was only after discussing this a bit further on Twitter that I realized that Topps (and MLB since they control the logos) only made the change this year. I’d assumed it had happened a while ago but no, 2016 had Wahoo—as did all previous years where the Indians logo was used. I’m not sure why I’m so surprised given how the Indians wore the Wahoo cap in all their World Series games..

This feels like a big deal to me. While it seems to have been noted but not commented on in the card community, that Topps, as essentially the card manufacturer of record, has finally DeChiefed is important and both MLB and Topps should be congratulated for making that step even if they did it woefully late. 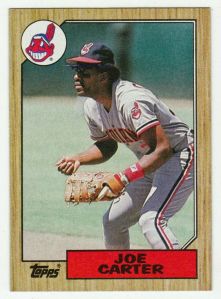 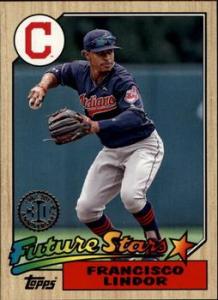 That Topps has also been making that change on its old designs which used to feature Wahoo is especially welcome. It was only when I started looking through all my old cards that I began realizing both how often that logo showed up and how distracting I found it now. Where some logos cause me to feel nostalgia, every card with Chief Wahoo on it made me wince.

While many of the design anachronisms bother me in the reissues of Topps’s old designs, I’m pleased every time I see the big Block C on a Cleveland card. There are plenty of things to wince about without having to see that logo in a prominent position.

A lot of this is because of my growth in awareness of how damaging and inappropriate that logo is. And a lot of it is being reminded over and over and over again that as I get into card collecting with my sons, I’m going to have to continuously reinforce how there are problems with the old logo and how our cultural norms have changed over the decades.

That it’s clear that the logo still shows up in the photos means I’ll have to be vigilant about this with the modern cards too. Topps isn’t photoshopping it out nor is it limiting its photo choices to just those images which don’t have it. So I’m going to be in charge of talking about how while we’re making progress there’s still a lot of room for growth.

And yes I figured I should look into the Braves as well. Their racist logo also occasionally resurfaces on hat designs and merchandise. Thankfully those designs don’t seem to make it out of the prototype stage but it’s noteworthy that it‘s still in the mix. I’m happy to see that Topps isn’t using it on the old designs anymore even though the same concerns about it showing up in photos are obvious.

To be clear, I’m not advocating that Topps should photoshop it out of the images—especially the old photos— where it’s present. That this was both commonplace and acceptable is as important a lesson to learn as understanding why it’s no longer ok.