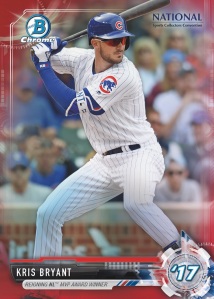 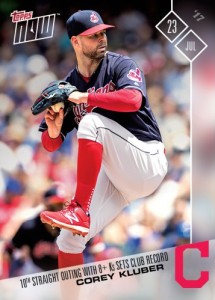 Oof. While 2017 marks the first time that the mainline Topps Sets haven’t used the Chief Wahoo logo,* it also appears to mark when the apostrophe catastrophe  hit the front of baseball cards. This has been driving me nuts all year with Topps Now and seeing the National Sports Collection Convention cards just twisted the knife.

*Yes, many of the 2017 Topps insert sets still use Wahoo.

Paul Lukas’s four-year-old article does a good job at spelling out what’s going on but the short version is:

’ is an apostrophe which stands in for missing characters whether in a contraction of a word like “Athletics” or when replacing the first two numbers in the year.

‘ is an open single quotation mark which is used when it’s necessary to nest quotations. It’s not supposed to be used in contractions of words like “Orioles.”

Because “smart” quotes in word processing programs assume that apostrophes only follow other characters and open single quotes only follow spaces, they use the wrong character on any abbreviation where the apostrophe starts the word.

As a former typesetter this kind of thing is a pet peeve. And I know I know, I’m especially sensitive here because of my background and many, if not most, people never notice things like this. But it’s also indicative of a larger trend away from hiring trained professionals. Seeing repeated typographical mistakes like this implies that Topps doesn’t employ anyone who’s been trained to set type. The inevitable conclusion here is that Topps doesn’t care about properly set type and just lets the computer do what it does. And the next question is wondering what else Topps doesn’t care about doing properly.*

*This is a subject for another, larger post but I’ve already had conversations on Twitter about Topps’s handling of photographs and how many of them seem to be getting hammered by a script which aggressively opens up shadow details.

I can’t let Donruss off the hook here as this year their cards show evidence of the apostrophe catastrophe too. The ones based on the 1983 designs are fine (1981–1986 Donruss all used the apostrophes in their design) but the ones based on 1991 are not. That Donruss is referencing old designs which do it correctly makes it even more annoying when they make a mistake.

Anyway that’s three different sets from two different companies this year which are using an open single quotation mark instead of an apostrophe. I’m not willing to throw in the towel yet in terms of accepting this new status quo but it’s not looking good.