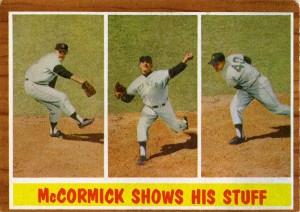 While baseball cards often depict action, I’ve become interested in the ones which try to depict moving action. In both 1959 and 1962 Topps released a couple of multiple-image cards which showed frame-by-frame action. Some of these were devoted to special plays like Mays’s catch in 1954 but a lot of them feel like their just trying to show action in an age where closely cropped action shots were impossible. 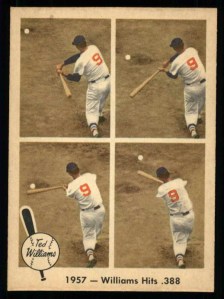 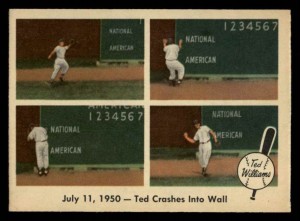 The 1959 Fleer Ted Williams set also has a number of these cards. I especially like the overhead angle on the batting shot but the 4-panel landscape card is also pretty cool. 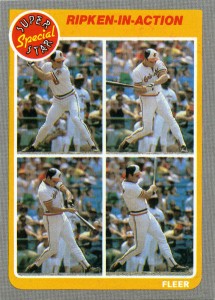 Fleer did much the same again in 1985. This makes sense as there wasn’t any other way to do this and the only major difference between these and their counterparts 23 years earlier is in the quality and sharpness of the photos.* The Fleer cards however do make for interesting comparisons between different hitters and how they swing the bat.

*I’ve asked around on Twitter and the like and no one seems to remember anything similar except for the 1968 Bazooka box panels. Those panels, while relevant to the discussion, aren’t really the same thing.

In the late 1980s though Sportflics came on the scene. We’d had lenticular printing on cards before with the Topps 3D and Kelloggs All Stars which used the lenticular effect for three-dimensional purposes. And we’d had other oddballs like the mid-1980s 7/11 discs which used it to flip between multiple images.

Sportflics though realized that this kind of thing could reanimate the still images on the Fleer cards. The resulting three-frame animation of baseball action very quickly became one of my favorite things. Despite being always 🔽 in the Beckett hot list Sportflics was always 🔼 in my heart. I recently showed them to my kids and they thought they were super cool too.

It’s also worth noting that Sportflics realized that it could animate the text as well. One box of text on the card front could display twice as much information and give us a larger picture as a result.

In 1989 Upper Deck came around with some very-cool multiple exposure cards. These were crisper images than what you could see in Sportflics and there was something about the multiple images which told the story of a standard motion—typically pitching—in the way that Doc Edgerton’s photos do where the resulting layered images become their own beautiful thing.

Upper Deck had these for a lot of years and even played with the form a bit with their Deion Sanders card which took the action thing and turned it into a transformation.

By 1994 other brands had started doing similar multiple exposure cards. Donruss’s Spirit of the Game inserts in 1993 had a bunch of these and Topps flagship went the Upper Deck route and just used this effect on select base cards. Because of my age I tend to see all these as copying Upper Deck but it was also interesting to see the approach get more diverse in the different ways that the multiple exposures were layered.

At the same time Upper Deck launched there was also a product called Flipp Tipps which, while not exactly baseball cards, totally deserves to be mentioned here since they’re collectible flipbooks. Lots of frames and I like the concept of making them somewhat educational as a way of breaking down how Brett Butler bunts or Will Clark swings.

*Copyrighted 1989 but given how they include Kevin Mitchell’s barehanded catch I’m inclined to say they came out in early 1990.

Sportflics meanwhile found its gimmick to be outdated in the mid-90s once motion holograms were invented. These showed up on Denny’s 1996 Pinnacle Holograms and have the benefit of many more frames to animate motion. Unfortunately they’re even harder to see than that Sportflics. The light has to be perfect and there’s no cue as to what direction you have to tilt the card.

Still, the Ozzie Smith backflip card beyond cool. Instead of being standard baseball action they’ve captured one of Ozzie’s trademarks.  That this set also includes Hideo Nomo’s windup and Gary Sheffield’s menacing swing shows that the designers really thought about which players had distinctive movements which were worthy of motion capture.

Topps also released its own version of these with Stadium Club instavision in 1997. It’s a smaller hologram but much easier to see. These cards were about specific highlights instead of capturing a general sense of the player.

It’s also worth noting that in 1997 Topps also went back to lenticular motion with Screenplays. Unlike Sportflics these had 24 frames of animation. Unfortunately I don’t have one of these available to GIF.

The ultimate action card though has to go to 2000 Upper Deck Powerdeck. Rather than being a motion card this was a baseball-card-sized CD-ROM with effectively a miniature website on it when you inserted it into your computer. Anyway the YouTube video speaks for itself. It’s a neat idea though sadly one which is already obsolete and unviewable while the 1959 Topps Baseball Thrills cards are as interesting as ever.