So I took a punt on Topps Archives Snapshots. As someone who’s into photography I was extremely intrigued by a product which was literally just about the photos. Where Topps Archives and Topps Heritage both feel very much about the designs, Archives Snapshots is a super-basic set which looks like the team-issued postcards and 8×10s from before the days when everything got a corporate sponsor.

I can’t review the set itself since, as a small-run, small-checklist photo-centric thing each card sort deserves its own writeup. So I’ll do that with the cards I got. 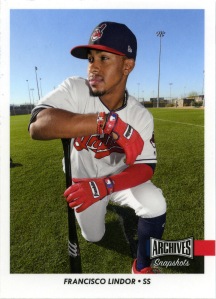 My favorite photo of the bunch. I love the wide angle portrait and how this is a variation of a standard baseball pose yet the photographer has managed to make it distinct. It feels comfortable but also different and distinct and that’s a rare combination for a medium like baseball cards. 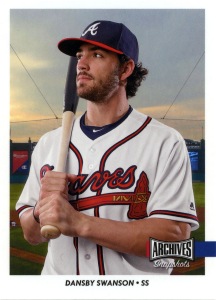 Pretty standard pose but the sunset light in the background takes this from basic to very nice. Sometimes professional competence is really all you need. Everything is exposed perfectly here both in terms of the right amount of light and the right temperature. 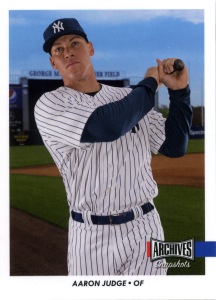 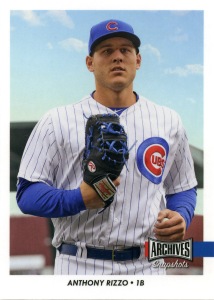 These both look more like paintings than photographs. Something about the flatness of the light and the lack of contrast anywhere suggests that these were originally part of photo shoots which were intended for a retro product (the Judge actually appears to be from the same shoot as the photo used on the 2017 Archives Bazooka card).

That these photos are in the archives this way suggests that the processing isn’t being done in post and that instead Topps is setting up a lot of its Heritage photoshoots to look like this. For me it’s more of a look which fits with the 1950s cards which often colorized black and white photos than the late-60s designs in current Heritage. 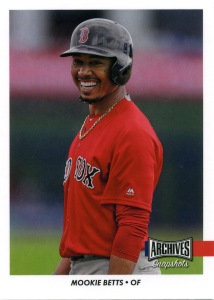 Comparing these to the previous two photos shows lighting which just feels more natural. Baseball is hard to photograph because the caps cast shadows in faces. Finding a way to properly expose the faces without making the rest of the composition look weird isn’t the easiest thing to do. These cards both do it well. 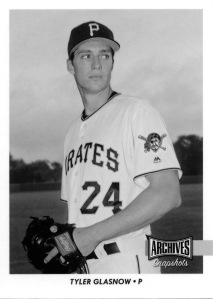 Actually a very good black and white conversion. The thing with the black and white parallels is that converting a color image to black and white isn’t that straightforward. It’s very easy to blow the contrast and color mix. It’s nice to see that Topps got this right.

It’s even nicer to see that Topps printed this as a duotone.* It wouldn’t have surprised me at all to see this printed as either black-only or a four-color process mix which ends up looking neutral.** Both of those options are much easier on the printer and would’ve looks just fine to the majority of collectors. Going with the special, second medium grey ink to get better tonal range in the image is a nice commitment to quality.

*Most cards are printed in process (Cyan, Magenta, Yellow, and Black) inks. Sometimes you’ll have a special spot ink in addition to those. With black and white photos though they’re frequently printed in just black ink. Duotones use a second ink on top of the black to provide a greater range of tones. If the second ink isn’t neutral it will also make the photo have a color tint.

**The black and white 2017 Stadium Club cards are printed this way. 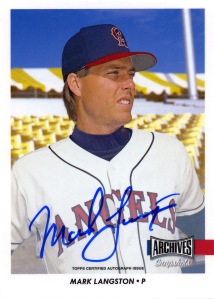 My “hit.” I’ve never been a huge fan of the faded out effect Topps uses for autographed cards but I’m pleased that this one is subtle. The photograph itself though could be better. It’s never a good look to have a player squinting into the sun. 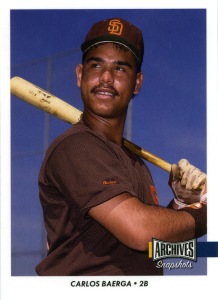 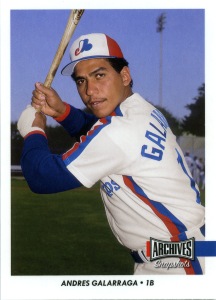 Two classic baseball poses which would’ve been at home on 1985 or 1986 Topps for sure. The Galarraga card is my second favorite of the pack. It looks like what a baseball photograph is supposed to look like but has the added benefit of those Expos uniforms and a young Big Cat. 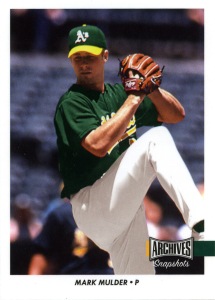 Yeesh. The worst photo of the bunch. By far. If there’s not enough contrast on Judge and Rizzo there’s too much here. The sunlight blows out the details on his leg and we’ve got chromatic aberration all over his cap. If this were properly focused it’d be salvageable but the entire image is blurry too. 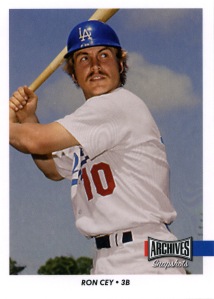 Photo is fine. Boring but fine. It’d fit right in on any late-1970s Topps design. The scan however is horrid. Just awful. I’ve never seen Newton’s Rings on a baseball card before; I hope I never see them again. Plus the rest of the image is way over-sharpened. There’s weird edge enhancement and haloing around his helmet and on his shoulder.

For all the good that Topps did in the Glasnow black and white photo, this Cey is the polar opposite. I can’t believe someone signed off on this for printing. I really hope this isn’t how Topps is digitizing its archives because it’d be an absolute disgrace to treat all their photos like this. 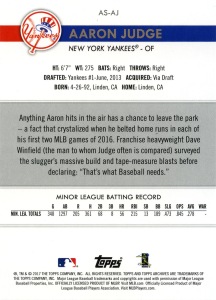 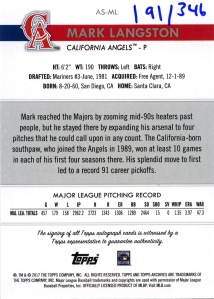 And the backs. While this set isn’t about the backs, I appreciate that they’re not an afterthought. These don’t feel like full-stats kind of cards but I’m glad they have lifetime Major League (or Minor League in the case of the rookies) stats along with the short bio. That’s a detail I’d’ve liked to have seen on Topps Bunt.

I’m less keen on the card numbering. Topps is doing this a lot with inserts and hits and it’s increasing weird to me each time I see it. I understand that these aren’t intended to be collected as a set. I also see how having some kind of identifying code makes sense. But treating that stuff as a card number? Silliness.