The latest issue of the Baseball Research Journal has an interesting (and….complex) article concerning on a May 31 1997 Grand Slam hit by Andres Galarraga during an 8-4 Rockies victory over the Florida Marlins . 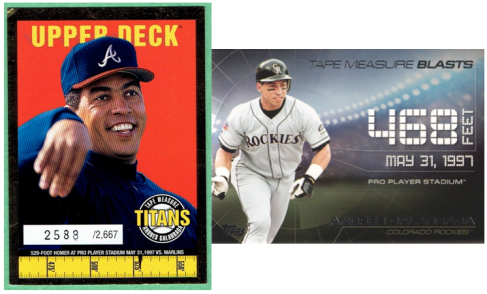 The Home Run was initially estimated to be 529 feet by the Florida Marlins. However, later Greg Rybarczyk of ESPN’s Home Run Tracker posted an updated estimated distance of “only” 468 feet.

In the BRJ article a panel of authors (Jose L Lopez PhD, Oscar A Lopez PhD, Elizabeth Raven, and Adrian Lopez) set out to determine which of these estimates was correct. They put together a thorough analysis which of course included significant math and physics, and less expectedly factors such as weather, wind and humidity. The Lopez Lopez Raven Lopez team concluded Galarraga’s Home Run travelled approximately 524 feet. The article is a SIGNIFICANTLY more involved – Go Read It!!

The length of the blast makes the Home Run one of the longest in MLB history and I have found the event was captured on cardboard at least twice.

Upper Deck went with a retro feel for this subset. I like the Tape Measure graphic at the bottom of the screen. UD went with the 529 foot calculation provided by the Marlins and we can see the gauge dropped at the proper point.

Now on to my dislikes, Andres Galarraga hit this Home Run as a member of the Colorado Rockies, during the following off-season he went to Atlanta via free agency. Unfortunately that leaves us with a player in a uni that does not represent the accomplishment. UD Also elected, on a hitting related card, to use a fielding pose.  However for me the most egregious violation is that the “Upper Deck” logo absolutely dwarfs Galarraga’s name.

Tape Measure Blasts was a 15 card insert set in 2015 Topps update. Notables in this set include Reggie, Clemente, Ted Williams, Josh Gibson, David Ortiz, Albert Pujols, Mike Trout, Giancarlo, and a Ryan Howard card that should really be in my collection.

The Topps card has the benefit of being produced 17 years after the UD original. By 2015 Galarraga was a retired player. At this point Topps could put the Big Cat in whatever threads they wanted and fortunately he is with the Rockies here. Topps gets bonus points for getting the Marlins stadium of the era, Pro Player, on the card.

Of course the big difference in the cards is that Topps went with ESPN’s figure for the distance.

The Retro theme carries through to the back of the Upper Deck card (Top) and they did a nice job. This is as solid as some Heritage designs.

The text on the Topps card gives us some good copy on the Home Run including name dropping Hall of Very Good pitcher Kevin Brown.

Despite the Topps card using the discredited distance I prefer their card. Too many things annoy me with the Tape Measure Titans – and I didn’t even mention that I really don’t like that name.