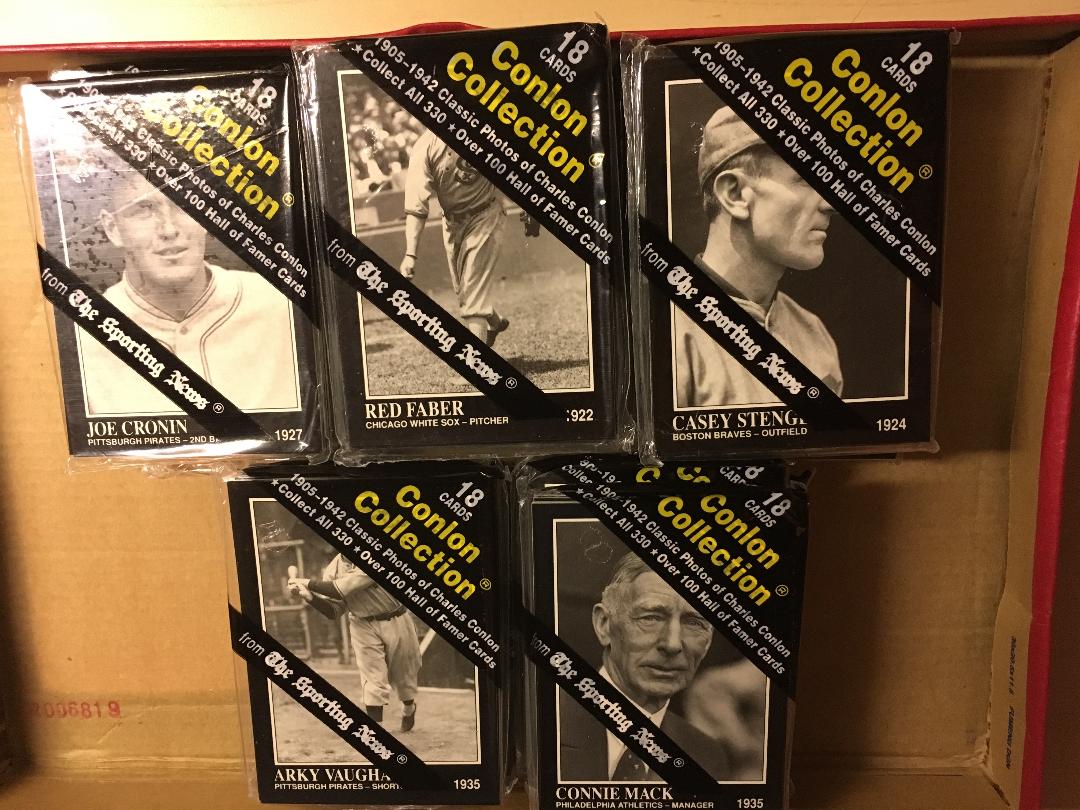 The Conlon Collection Project series continues with Part 2, a collection of five stories based on cards selected by our writers.  Over the next several weeks we will present different writers and different stories.

If missed the incredible story of the origins of the Conlon Collection by Steve Gietschier, be sure to check out: https://sabrbaseballcards.blog/2017/11/27/the-conlon-collection-project-intro/ 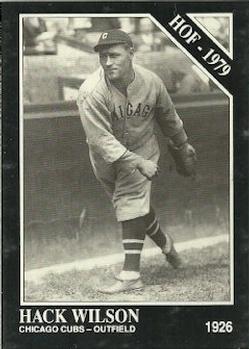 Hack Wilson was a Chicago Cub, which is the primary reason I chose him. However, another reason is that I have a promotional picture for Diamonds in the Rough with Wilson posing next to Radio Flyer wagons hanging on my bedroom wall. (It was inside the copy of Diamonds that I checked out from the Chicago Public Library many years ago and I thought it was cool, so I kept it. Please don’t tell anyone at CPL. J)

Wilson’s card makes me feel wistful, but it also reminds me why I love baseball. I am fascinated by history, and baseball’s rich history is probably the main reason I came to love it so much. This card makes me want to go back in time to see all the great players of the 1920s and 30s. Although he’s in the Hall of Fame and still holds the NL RBI record, I don’t think Wilson is as well-known as he should be. Perhaps he would have been remembered as one of the greats if his career (and life) hadn’t been cut short by alcoholism. 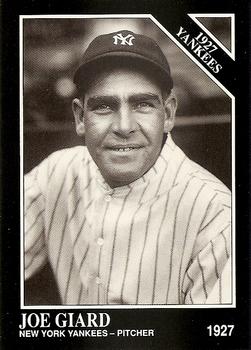 Joe Giard of the 1927 Yankees is depicted on card 119 in the Conlon Collection set.  I prefer Conlon’s portrait images, and Giard is an interesting subject.  He’s smiling in this shot.  He seems confident and approachable.  His Yankees cap is pristine and fits perfectly on his head.  His eyes are clear and his eyebrows full.  His facial features remind me of my wife’s long passed Italian relatives, and in Giard, I feel their welcome and genuine sense of family.  It’s a flattering image of a man in his prime.

Still, the lines on Giard’s face make him appear 15 years older than he is here, in his late twenties.  1920s America was harder on the body, with alcohol, tobacco & environmental pollutants.  Personal training and nutrition were primitive.  All the players in this set appear older than they were.  We romanticize about the era, but it had to have been a more difficult life.  Still, Giard smiles.  He’s probably the least consequential member of one of the most consequential teams in history.  He only made it into 16 games all year, with a 0-0 record.  All the games had been decided when they called on him.  I wonder if he got tired of talking about Ruth and Gehrig, Hoyt, Lazzeri, Pennock and Miller Huggins.  What would it be like to be part of greatness, but almost all of it as a spectator?  But the stories he could tell.  And it looks like he’d be happy to tell them. 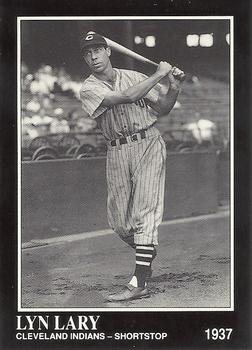 Lyn Lary has the look of someone who has worked hard his entire life. He’s from Armona, CA, a town I know nothing about. But in my mind, Lyn Lary played baseball to escape Armona and make a better life for himself.

The main reason I chose Lary is that I’d never heard of him before and those players interest me. Who were they? How did they get to the big leagues? What did they do after they retired? Writing about the other players in my pack of cards like Al Simmons, Hack Wilson and Honus Wagner would be “easier,” but my preconceptions would bleed through. Choosing a player who was anonymous, at least to me, allowed me to focus on the image rather than the player and that’s what drew me in. 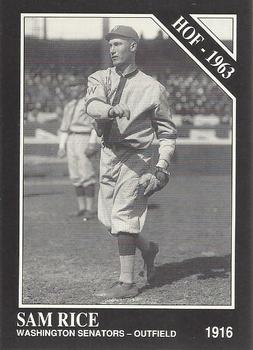 There are just a few things that have stayed almost exactly the same since before there was even one World War in the history books, let alone two.

I couldn’t travel back to our nation’s capital in 1916 and have a meaningful conversation with Sam Rice about too many things. We’d have no common background to discuss food, travel, or politics. We both grew up in the rural Midwest, so I suppose we could talk about the hot, humid summers or October leaves. But the vast majority of my experience in 21st century America would make no sense to Sam.  But we could have a catch.

He’d whip the ball to me the same way my dad and uncles did on summer weekend afternoons. The sound of the ball sailing through the air and smacking our leather gloves would be the same whether I went to Griffith Stadium or he came to a ballpark with a name like Guaranteed Rate, Globe Life, or SunTrust.

The world was bigger then. The ballparks, too. Sam played 20 seasons of big league ball and only hit a pitch over the fence 13 times. He had more home run sprints than trots (21 inside-the-park homers) and used the massive Griffith Stadium outfield to rack up 184 triples. Parks were built then to fit into their surrounding areas, not the other way around. Exit velocity and launch angle don’t matter as much when the left field pole is more than 400 feet away. So, although Sam would’ve recognized the basics of the game, as a guy who struck out about twice a month, he might be amused at the all-or-nothing approach of today’s hitters.

Throwing a baseball back and forth, though, getting ready to play the game, would feel the same no matter the time. 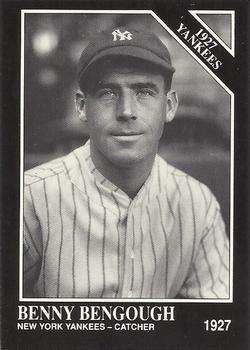 After looking through my pack of Conlon cards a couple of times, one card seemed to stand out to me.  It is a card of New York Yankees and St. Louis Browns catcher Benny Bengough. There was something about his look and his very slight smile.  He has very clear cool eyes and he just seemed to have an aura of peace and satisfaction to his smile.  Also, he looked current.  Like someone who could be working with me or that I knew today.  He did not look dated.

But again, it was the eyes that drew me back. The only thing I really knew about Benny was that he was on card #1 in the 1933 Goudey baseball set.  Aside from that, nothing.  I read the back of the card to learn about Benny and found out that he played on the 1927 Yankees (1923 through 1930, in fact).

Amazingly, in 1926, Benny was hitting an unbelievable .381 in 36 games, but was sidelined by a broken arm after being hit by a pitch.  He played six years after that but did not again come close to that previous success.  He also did not hit a home run in the majors.

Looking at his stats really made me wonder when the picture was taken: before or after the injury.  Is he is smiling because of a bright future ahead or is it a wistful smile at what might have been or a smile of contentment regardless of his circumstances, or a smile of knowing he was playing with some of the best baseball players and arguably on the best team of all time.

I don’t know.  But it was the smile and the eyes that led me to select this card.

One thought on “The Conlon Collection Project: Part 2”