When I was growing up, the baseball history books I read always put executives (and umpires) on the same high level as players. Yes, the Babe was the king of them all, but Bill Klem got fairly equal billing as a titanic figure, as did Kenesaw Mountain Landis, Ed Barrow, George Weiss and other guys who sat behind desks. I’m not saying these guys didn’t contribute to baseball, I’m saying who gives a crap. The man who was VP in charge of sales for EMI doesn’t get credit for being in The Beatles.

Today it seems somewhat archaic to me to make executives so lofty, lofty enough to be Hall of Famers, and when new businessmen and umpires get in (Pat Gillick and Doug Harvey, for example), it strikes me as so old-fashioned, that a GM or ump is still seen as plaque worthy, in fact, as it stands now, more plaque worthy than Barry Bonds. The elevation of authority figures is so last century or should be.

Even Topps bought in to the “executive as baseball legend” meme. How else to explain this card?

American League President Will Harridge, is the first card of the 1956 and so what? Such a seemingly consequential figure, celebrating, as the card back notes, “his 45th year of outstanding service to Baseball” (with a capital “B”).  And the number two card is NL President Warren Giles! Hmm, in 1956 who could possibly have been more worthy of the top one or two cards in the Topps set? I don’t know, Johnny Podres, Duke Snider, any  one of the finally World Champion Brooklyn Dodgers? Were kids really looking for bespectacled old men in a 5 cent pack?

At least Topps condensed these two quasi-nonentities into one card in both 1957 and 1958, though reverted back to a single Giles (and a Ford Frick, Harridge was gone) in 1959, replaced by even then Hall of Famer Joe Cronin. Of course, Cronin didn’t deserve his own card! 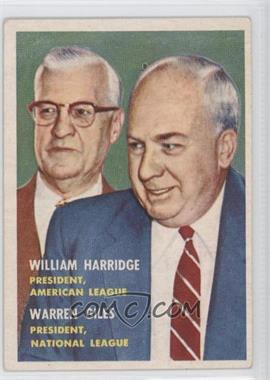 I’m working on the 1956 set and picked up a Giles in VGEX for $2-3. The Harridge card picture above just sold for $46.97 at an eBay auction. I’ll get it in time, but the idea of spending as much for Will Fucking Harridge as I will for 20-25 commons in EX drives me batty. There’s no joy in that equation.