For under $5.00, I purchased what was purported to be a 1947 Bond Bread Phil Rizzuto card. I was vaguely aware that cards had variations which affected the value, but the cheap price made me skeptical of the authenticity. To determine if I was truly hornswoggled, I decided to research the history of this card set(s). I discovered much confusion, misidentification and perhaps subterfuge. To be clear, much of the information in this piece is based on supposition by collectors, since source material is scarce or hasn’t been found.

Firstly, identifying all the cards as “Bond Bread” is not accurate. Only 13 different cards-all featuring Jackie Robinson-were distributed in “Bond” brand bread. The Robinson images have rounded corners within a white outside border with square corners. They are slightly smaller than today’s standard cards. Each card has an advertisement for the bread and a message from Jackie on the back. The Robinson set is a fascinating topic. I highly recommend reading the “Beckett” article linked in the sources. 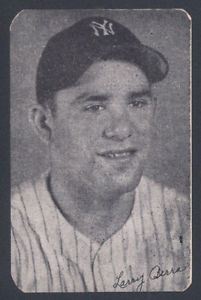 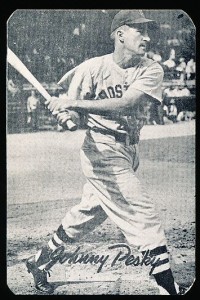 The confusion starts with the release of a rounded corner bread set in ’47 at the same time as the Robinson set. This 48-card set of 2-1/4” X 3-1/2” could be obtained in loaves of Bond’s “Homogenized” Bread. Many collectors have erroneously merged the separate issues. The format–minus the white border–and facsimile autographs are identical to the Bond Robinson cards, leaving little doubt that both were printed by the same company. Also, The Standard Catalog of Vintage Baseball Cards states that the cards were issued in 12 card sets by the Aarco Playing Card company. This could be a clue that Aarco was the manufacturer of all the sets.

Now, here is where it gets strange. In ’47 another set is produced containing 24 of the baseball players found in the Homogenized Bread set, plus four boxers. The cards have square corners and are printed on thinner stock. Distribution details are far from certain, but some collectors speculate that they were dispensed in arcades, similarly to exhibit cards of the era. Of course, these cards have ended up being lumped in with the previous sets under the Bond Bread label. 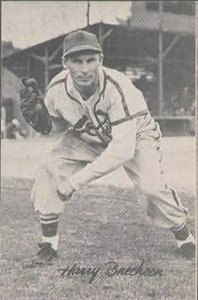 But the saga doesn’t end here. In the ‘80s, a flood of the ’47 square edge cards mysteriously entered the collectors’ market. Supposedly, a stash of uncut sheets was unearthed in a warehouse. These are often deemed “impostors,” since they may have been printed in ‘47 but cut into individual cards in the ‘80s. Interestingly, a Harry Brecheen card turned up in this lot but not in the other ’47 iterations.

To further cloud the issue, some unscrupulous dealers reprinted the “found” cards and sold them as high grade originals. This means that if the “warehouse” cards were counterfeited-as some collectors speculate-then these are “fake” fakes.

To top it off, there are two larger format sets of the ’47 Homogenized Bread cards. The first one is known as Bond Bread “Premium,” since it may have been a premium offered by the company to bread buyers. The cards are 6-5/8” X 9” with white boarders. Another 3-3/8” X5-5/8” version was probably produced for arcade distribution. This set contains Walker Cooper, which is not in the base set.

So, what about my “Scooter” card? I’m hoping it is from the ’47 square corner set or even an ‘80s “warehouse” cut. But more likely, it is a fake. Buying it out of the trunk of a Buick behind Vito’s Bar and Grill should have been a dead giveaway.

In closing, the vintage “odd ball” sets are sorely lacking documentation. Over the years, collectors and dealers have done their best to patch together printing, distribution and marketing information. This is an area crying out for research.

Please chime in with any additional information or corrections. This subject was — as my students say– “hella” confusing.