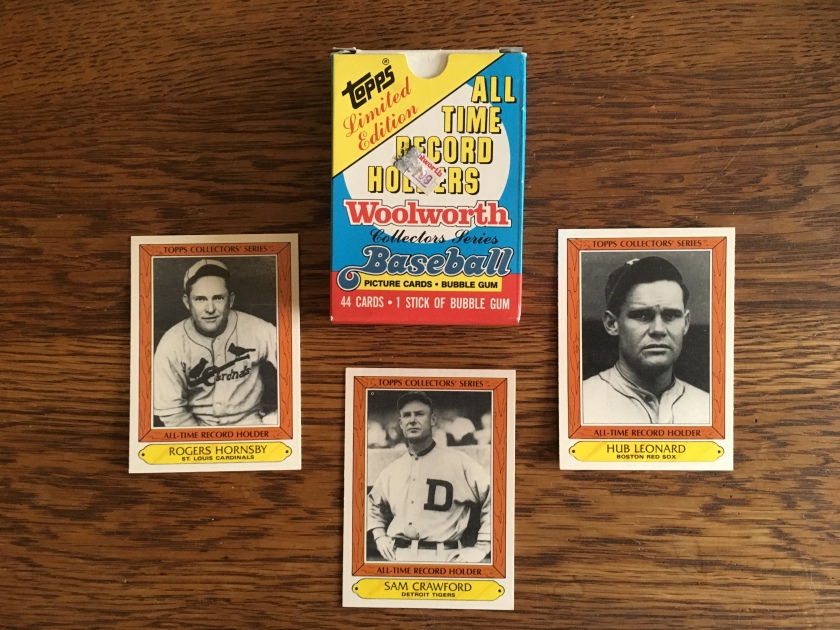 Since the end of the summer, I’ve been going through the treasure trove of gifted shoeboxes filled with various baseball cards.  I’ve written a bit about my discoveries, and the most recent find is a 1985 Topps 44-card boxed set from Woolworth’s, the old five-and-dime store.

This set is touted as a limited edition All-Time Record Holders Collectors Series, featuring players from Hank Aaron to Walter Johnson, and Tris Speaker to Ernie Banks. The cards, measuring 2 1/2″ x 3 1/2″ are in color as well as black and white. The checklist can be found on the box in alphabetical order by player’s name.

This was the first year that Woolworth’s put out such a set, with subsequent cards that followed until 1991.  Though after its initial run, the card set dropped from 44 cards to 33 cards, and only depicted current stars.

Hoping to leverage the craze of the baseball card collecting mania of the time, a number of retail outlets from Woolworth’s to K-Mart to Kay-Bee Toys released their own card sets.  A shopper could find these boxed sets next to the cash register as impulse items.  The box I have has a price tag of $1.99.

Thanks to my recent experience with the Conlon Collection, I found myself paying more attention to the black and white images.  That is, I carefully examined the photos of the men, their expressions, their uniforms, and what they might have been thinking when the photo was taken.  Sam Crawford, for example, is sporting a 1916 uniform with a plain script “D” rather than the Old English “D” that we are accustomed to seeing on the Detroit Tigers jersey.  Hub Leonard of the Boston Red Sox is depicted with his cap askew, looking a bit worried, if not determined.  And Rogers Hornsby of the St. Louis Cardinals, meanwhile, sports a devil-may-care smile with a confident expression.

9 thoughts on “Another Discovery: The 1985 Woolworth’s Card Set”