A recent National Pastime Museum article by Scott Ferkovich focused on the Kellogg 3-D sets, including the 15-card 1972 set of Hall-of-Famers who were voted (as Scott notes, in a less-than-representative way) the best at their positions. Scott wondered if this is the only card set that features just Hall-of-Famers. The answer is no, although in 1972, it likely was. 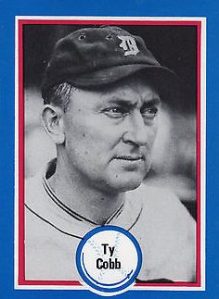 In 1976, the five Shakey’s Pizza Parlors in the Seattle area distributed a 160-card set (156 different images, three variation cards and an un-numbered coupon card) of every member of the Hall of Fame, as of that year — in order of induction. (Full disclosure: I have the top PSA-graded set of these cards on the registry.) The set was created in conjunction with the 1976 convention of the Washington State Sports Collectors Association. The cards were distributed at the convention and at the Shakey’s restaurants in 1976 into 1977.

To include every member, the set had to feature images of 19th century players as well as executives, umpires and Negro League stars. There just aren’t many cards in any sets of some of these guys. Supposedly, up to 2,000 prints of each card were produced. Perhaps two thirds are still around.  Even so, the cards are relatively easy to find on eBay and aren’t expensive in excellent condition.

The cards are standard size and feature black-and-white images with a red, white and blue color scheme on the front. The backs are red and black on white and feature short bios and a few stats. For reasons that aren’t clear, the back of each card identifies the Hall-of-Famers by one of four designations: “Immortals,” “Greatest Players,”  “All-Time Greats” or just “Hall of Fame.” You’d assume the non-players would be among “Baseball’s Immortals,” yet, for example, Morgan Bulkeley, the National League’s first president, and American League founder Ban Johnson are both identified among “Baseball’s Greatest Players.” 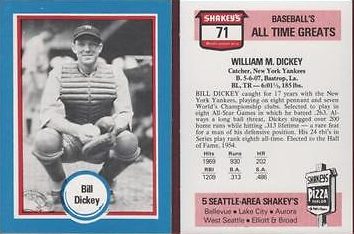 The cards with the different designations were distributed at different times, creating in effect four sub-sets: First series cards had the “Hall of Fame” designation, second series had “Greatest Players,” third had “Immortals,” and fourth had “All-Time Greats.” To add to the confusion, Hall-of-Famers from each of the four sub-sets were randomly distributed numerically in the overall set. The first five inductees, although numbered 1 through 5,  have four different designations. None of that matters much to anybody collecting the set today.

The photographs for the cards were provided by late Chicago area photo seller Jim Rowe, according to The Baseball Hobbyist in Edmonds, Wash., a longtime card dealer that often features cards from this set.  Rowe’s collection included many images taken by the Chicago-based photographers George Burke and George Brace.

I’m an East Coast guy, so I didn’t get any of these cards when they were issued. I came across this set about 10 years ago when I started trying to put together a collection of all the Hall of Famers, either with contemporary cards or from sets like the Shakey’s  –  or the ’60 and ’61-’62 Fleers or the TCMAs from the ’70s, for example. It’s a challenge, but that’s part of the fun of collecting. I don’t know if any sets similar to the ’76 Shakey’s have been produced since, but I’m not aware of any. Let me know if any of you know otherwise.

I'm a retired daily newspaper journalist and life-long baseball fan. I write biographers of players when I can for the Bio Project and game stories for the Games Project. Please feel free to offer suggestions for blog post by emailing me at senators24@yahoo.com. View all posts by Andrew C. Sharp

4 thoughts on “All the ‘Famers”