Although this may elicit a groan or a “here he goes again,” I offer another profile of an obscure collectible whose inclusion in the baseball card category is dubious.  This time, I’m “shuffling the deck” and “dealing” the details on the 1953 Brown and Bigelow Baseball Playing Cards.

Several years ago, I bought a single playing card with Ty Cobb on the back at an antique shop for a few dollars. The illustration features Cobb apparently dispensing base running advice to a stereotypical ‘50s boy, who is sliding into a base. The background has a “ghostly” newspaper with a headline about Cobb. At the bottom is a printed advertisement for a casement company in San Francisco. 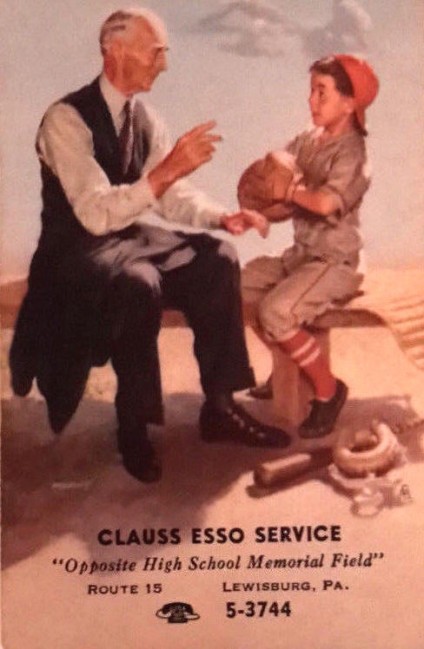 The Brown and Bigelow printing company — which still exists — specialized in the production of promotional items. In the ‘50s, they employed many prominent illustrators such as Norman Rockwell and William Medcalf, who created the baseball illustrations. At the time, their main business was producing calendars but they also turned out other promotions such as playing cards. 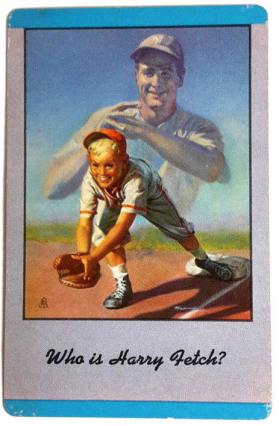 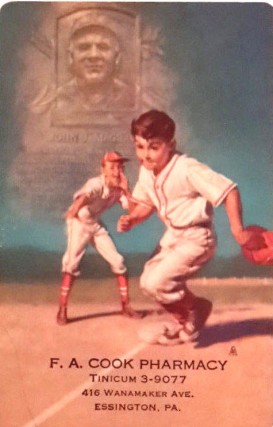 In addition to Cobb, Medcalf produced images for Wagner and Mack which depicts them as they appeared in ’53, since all three were still living. Conversely, the deceased Ruth, Gehrig and McGraw have “ethereal” images. The illustrations are well done, but-in my humble opinion- they are “cheesy” or to be more charitable, “saccharine.”

Below the art work on the standard Bridge sized (2-1/4 X 3-1/2) card is where the advertisement is found. Since the cards were purchased by businesses across the US and Canada, the number of variations is unknown. Of course, since these are playing cards, each player technically has 52 different cards plus two jokers. Some merchants gave away a box set of two different decks labeled “The Kings of the Diamond.” 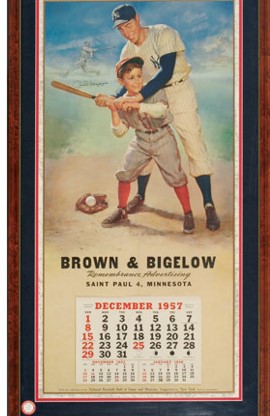 The Metcalf artwork was used on calendars as well. In fact, Brown and Bigelow produced baseball player calendars for years, featuring such players as Foxx, Hornsby, DiMaggio and many more. Since calendars were tossed out at the end of the year, they are much rarer than the playing cards.

In closing, I must mention that the Brown and Bigelow printed promotional materials featuring Cassius Coolidge’s 16 different “Dogs Playing Poker” paintings. Since they were widely distributed, the “gambling canines” became a familiar piece of Americana for people of a certain age. Of course, I have a large print over my living room couch.