The splendor of baseball card collecting was germinated 50 years ago when I opened my first “wax pack.” I distinctly remember two of the cards I pulled that day: Tom Seaver and Ted Kubiak.

The Seaver card-which is pictured above- is pressed in my memory, mostly due to my brother’s attempts to take it away from me. This is Tom’s first solo card after being paired with Bill Denehy on what has become a rare and extremely pricey ‘67 Rookie Stars card (also pictured). My brother must have known that Seaver was an up-and-coming star. I only knew that he wanted it, so I was not about to give it up easily. 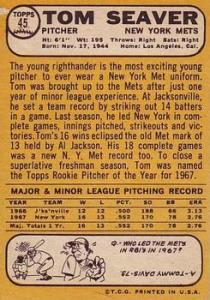 Tom’s card is a classic portrait coupled with the Topps ’67 All-Star Rookie trophy. The card back informs us that: “The young righthander is the most exciting young pitcher to ever wear a New York Met uniform.” Of course this statement turned out to be extremely accurate, but it didn’t take much to be the best young player in Mets history in ’68.

The Seaver card is memorable for a variety of reasons. But Ted Kubiak? The wisp of silver hair sticking out from Ted’s slicked back locks has stuck with me from first sight. The close- cropped head shot was used on many A’s cards in ’68, since that was the year Charlie Finley moved the A’s to Oakland from Kansas City. Players depicted wearing caps had the “KC” airbrushed away. 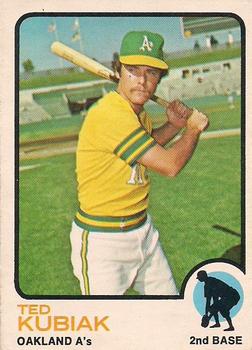 Ted was a classic “good glove, bad bat” guy. The back of his card essentially predicts his career arc: “Ted is capable of playing several infield positons. Ted is a great defensive player.” His one opportunity as an everyday player came in 1970 with the Brewers, where split time between 2nd and shortstop. Of course, he would have been a regular for the Pilots if they had still existed in ’70. Incidentally, Kubiak was one of many players traded away by Finley, only to be reacquired later.  Ted was on all three of the A’s championship teams of the ‘70s, primarily as a utility man.

Ted’s card suffered water damage from a sprinkler when I left it on the porch railing. I may have disposed of the card, since it wasn’t with my other ’68 duplicates.

Although I’m not 100% certain they were in the first pack, Tom Tresh and Al Downing cards were contained in my first few packs.

Anyone else remember a specific card pulled from the first pack?

7 thoughts on “Tom Terrific and Ted Who?”