It is a safe bet that a majority of this blog’s readers and contributors have spent many hours playing Wiffle ball. Whether you preferred playing with a “naked” ball to get the curving effect or layering on the electrical tape to launch “tape measure” shots, for many of us Wiffle ball was a big part of summer fun.

In part one of a two-part post, I will once again desecrate the definition of baseball cards by examining Wiffle ball boxes with player photos. (In my defense, the boxes are made of card stock and removal of the top flap with the photos would approximate a card.) Part two will look at the Wiffle ball disc cards distributed in the late ‘70s.

David Mullany invented the Wiffle ball in 1953 with the intent of preventing broken windows when his son played ball in the back yard with his friends. The final version of the ball curved dramatically, resulting in many “swings and misses” or “whiffs”–hence the name. By the late ‘50s, Mr. Mullany’s ball was sold all over the country. Around this time, many of the boxes containing the balls began to feature photos of Major League players. 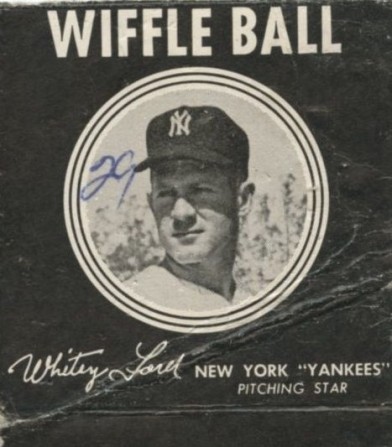 I was unable to pin down the exact year that the player endorsements began, but Whitey Ford appears to be the first player. His initial box has a different photo from the one distributed in the ‘60s. This is the only instance of a player who has two different images. By the way, Whitey did a TV commercial for Wiffle Ball in the ‘60s. 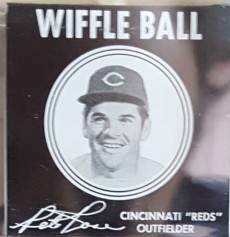 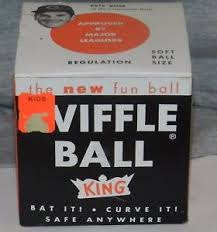 Wiffle balls came in three sizes: Regulation, King (softball) and Junior. The Regulation box had one or two players on an orange background with a large white circle in the middle. King Wiffle balls have one, two or three different players with a white background and an orange circle. The Junior boxes only have one player’s photo inside a white circle surrounded by black. Several of the players appear on all versions as depicted by Pete Rose boxes. 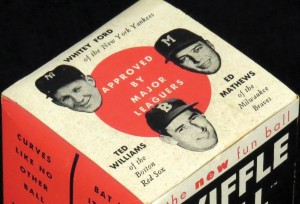 I still have a Munson Junior box and a Piniella King I bought in the ‘70s.   I have five total in my collection, having lost several Pete Rose boxes from childhood.

After I “snap off” a few “Uncle Charlies” in the backyard, I will present some actual cards in part-two.

3 thoughts on “It Curves”