Today in the second installment in our three part series dedicated to the 1962 Topps Rookie Cup All-Star team we are going to take a look at the voting process. For more on the team check out Part 1.

The Topps All-Star Rookie team has been selected a number of different ways over the years. Originally they were selected via a vote by “the Youth of America” . I am not positive but I believe currently Topps has MLB Managers vote on the squad.

In 1962 that responsibility of picking the team was the belonged to a fairly complete roster of the players coaches and managers of Major League Baseball. Thanks to the Sporting News we have a record of that vote. 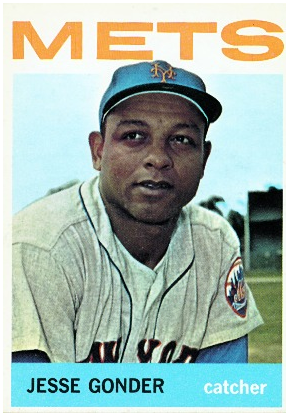 We will get to Jesse Gonder in a minute, for now I will just mention that he did not lead the voting, nor did NL Rookie of the Year Pete Rose.

According to an article published in The Sporting News (1963 Sep 21) There were 563 players, coaches, and managers involved in the voting. During the 1963 season there were 20 MLB teams, this means that an average of more than 28 people voted for each team.

A solid selection, Peters was Rose’s AL ROY counterpart. The rest of the voting went as follows: 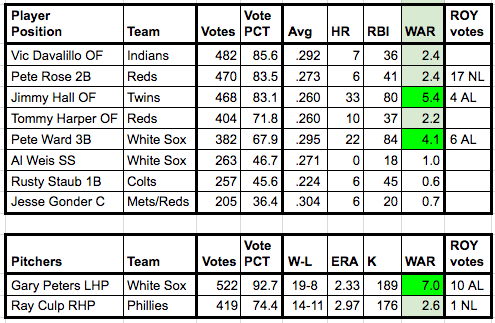 I broke the Rookie All-Stars into two groups, Position Players and Pitchers just to make the the MLB Stat columns a little clearer. Both tables are sorted by the Number of votes received in the All-Star Rookie tally.

The hitters break down into two groups the first 5 that all received at least 2/3 of the vote. The final 3 players were more contested and all finished at 50% or less.  Both pitchers won their positions easily. It appears the “eye test” worked in 1963, The five hitters chosen had WAR numbers of +2.0 or better while the final 3 were all +1.0 or below. One cannot question the selection of Gary Peters and his +7.0 WAR.

We chose Jesse Gonder as cover card for a couple of reasons. To start off Catcher was the most contested position of the voting:

Nice to see Twitter favorite @JohnnyBateman7 on the board. As we can see Freehan won the WAR however in 1963 that was obviously not known. Gonder won the vote, likely due to his .304 batting average. Of course voting for him meant ignoring the fact that he had less than half of the plate appearances of either Freehan or Bateman.

The second reason we decided to focus on Jesse Gonder is his card. Take a look, notice anything odd for a rookie cup card? Yep, no Rookie Cup. Not sure why it happened but the Trophy icon was missed on Jesse Gonder’s 1964 Topps card. Of the Ten cards in the All-Star Rookie subset it is the highest numbered, one of two on the series 6 checklist which runs from from 430-506. Perhaps by the time Topps got to their penultimate series the quality control had slipped a tad.

I would like to close by discussing Pete Rose who won second base but did not garner as many votes as either Gary Peters or Vic Davalillo.

This may be due to the fact that Pete Rose likely had competition from HBP specialist Ron Hunt. TSN did not publish the Topps voting results for all the positions, it is notable that the only player to garner Rookie of the Year votes yet not receive an All-Star Rookie Cup was Hunt.

I am a little stunned how much better Rose did in the ROY vote considering how similar his and Hunt’s numbers were in 1963. Apparently Hustle counts.

Once again I will mention if you want to read a fine article on the 1963 Topps Pete Rose card check with Wax Pack Gods.