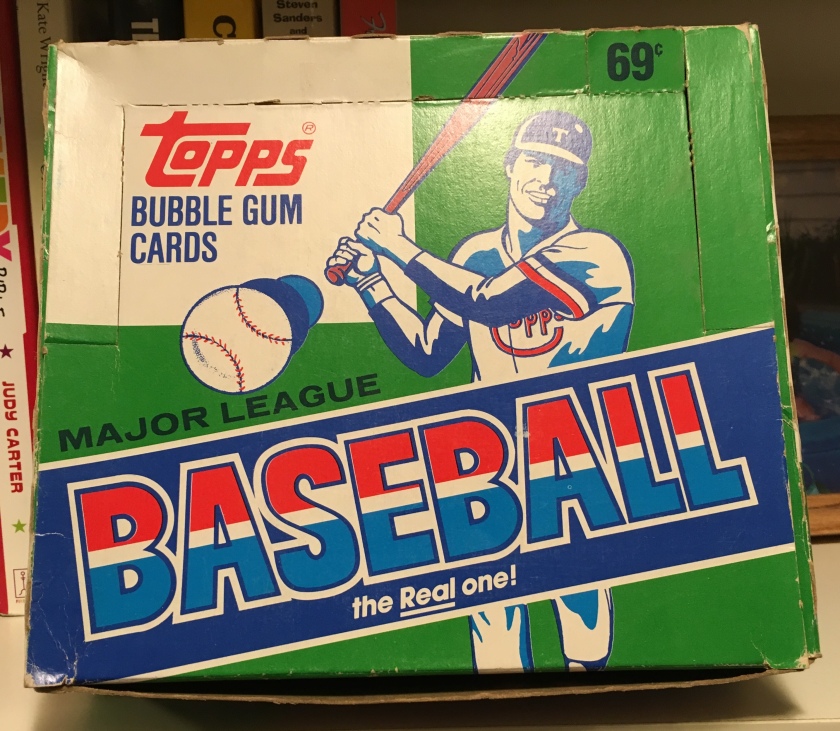 The summer’s treasure trove of baseball cards continues:  Among the shoeboxes I was gifted, there was a baseball card pack box full of over 750 loose cards.  When I saw the box, I had a bit of fantasy that inside I would find wax packs.  There’s something special about opening a pack of cards, especially an old pack.  Would I find 17-card packs with sticks of gum?  Alas, the box was full of loose cards.  Oh well.  A boy could dream.

Pile by pile, I picked up each stack and quickly flipped through the familiar names making note of the card design as well.  The 1987 Topps set (792 cards) was touted as a “blast from the past” giving collectors memories of the 1962 Topps set with its use of a border with its simulated wood-grain finish.  The card features a large player photo with the team logo at the upper left corner and the players name in bold font inside a colored box next to the Topps logo at the bottom of the card.  The player’s position, however, is not indicated, which is the first time since 1972 that Topps did not include this detail.

As I flipped through the cards, I thought about the 1962 counterpart and about what I didn’t like about this card design.  The wood border is fine, yeah, another flashback that Topps has done before.  What bothered me was the missing player position, and the team logo.  I like the uniformity of other card sets depicting the team name in the same font.  To me, the logo sort of throws the uniformity of the card off.  I believe this set is the first time since 1965 that a logo has been added to the card, though in that set, the logo was incorporated with the team name in the same font imposed on a pennant.

I knew that noted “rookies” of interest in this set included Ruben Sierra (#261), Mike Greenwell (#259), Wally Joyner (#80), Barry Bonds (#320) and Mark McGwire (#366), who had first appeared on a card in a 1984 U.S. Olympics Topps subset issued in 1985.  Among this box, I found a Greenwell, couple of Joyners and a McGwire.  These cards, like the rest of box, are in tip-top shape.  Sharp corners, no wear, vivid pictures, like the previous owner never played with them at all.  It’s amazing to me that of all the thousands of cards that were gifted to me in this summer collection, they are almost all in pristine condition, save for the dozen vintage cards I wrote about earlier.

I realized too, in thinking about the 1987 year, that I didn’t spend time at all collecting baseball cards during most of the 1980s because I was in college spending my extra funds on girls and beer.  Some 20 years or so later, I was able to go back and start collecting those years I had missed.  This 1987 set isn’t my favorite, but I did enjoy seeing all the familiar names and certainly appreciate opening the box and making yet another great discovery.