1969 Topps was a rough year as the player boycott plus four expansion teams put Topps in a major bind with the photography. As a result, many of the cards featured photos which had been cropped super tightly to obscure out-of-date photos, featured hatless players, involved unflattering low-angle shots to hide cap logos, or had the logos painted over. This, plus the numerous re-used photos overshadowed what could’ve been a great design.

Needless to say I was a excited to see 2018 Heritage since I expected that the 1969 design would look really nice if done well. The results have mostly confirmed this. Photos aren’t cropped too closely—more three-quarters length portraits instead of neck-up headshots—and are distinct from what we’ve seen in Flagship (though there does appear to be some reuse from previous years of Heritage). They’re also generally taken in better light than Topps took photos in in the 1960s. No more squinting in full sun or dealing with shadows across faces. 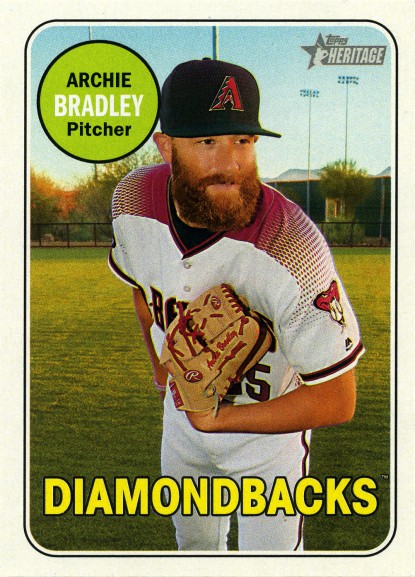 Many of the Heritage images use fill flash well and balance things nicely with the ambient light. Where in the mid-80s Topps went a bit overkill on the flash and turned many of the photos into impending thunderstorms, 2018 Heritage features sunny days that look perfect for a day game or sunsets that suggest it will be a wonderful night for a ballgame.

It’s a great demonstration of how good 1969 Topps could’ve looked and really illustrates the promise and appeal of the Heritage line. Topps also did very well this year in using photos which overwhelmingly feature white home uniforms or road grey uniforms. In previous years there have been a lot of colored alternates or spring training tops* which clash with the retro-esthetic of the designs.

*As a Giants collector this has been one of my biggest peeves about Heritage.

I’m also glad that Topps used the smallest possible ® and ™ symbols on the team names. In many of their retro sets (including this year’s 1983 throwbacks), adding those characters throws off the alignment and, to my eye, ruins the design. So kudos to Topps for getting it right here.

Being the type/design nerd I am though there are also a few things going on that really bother me about Heritage. One big one is that Topps chose to use the longest-possible position names—including “Outfielder” instead of “Outfield,” a choice I don’t think I’ve ever seen on a card before. This wouldn’t normally be an issue except that in order to fit the positions into the circle Topps had to compress the font. And even compressed, “Second Baseman” doesn’t fit well.

I have no idea why Topps did this especially since both last year’s Heritage and the original 1969 design use short position indicators like “2nd Base” instead.

I’m also disappointed, but not surprised, that Topps went with “Diamondbacks” instead of “D-Backs” since the extra-long team name pretty much breaks a lot of the 1960s designs. It is indeed cramped on these cards as well but still looks better and is easier to read than previous years’ Heritage.

While I’ve seen a bunch of complaints about changing the color of the Astros dot from light green to dark blue, that doesn’t bother me. I’d actually like to see all the dots updated to better match the team colors. What does bother me is that Topps went with black ink for the position name inside the dark blue dot. This is literally unreadable and an obvious design screwup. I’d love to see the positions in white or orange here instead.

This Gattis card though also takes me into the thing about Heritage that upsets me the most. While Topps has done a great job in updating the design with good photography they’ve also gone ahead and ruined a lot of the effect by post-processing many of the photos with a fake dot pattern which I’m assuming is intended to mimic a traditional halftone screen.

For a few years now Heritage has been printed using stochastic screening.* This results in much cleaner photographic images and generally improves print quality. Or at least it would if Topps didn’t add this silly dot pattern back into the photo. On the fronts of cards it’s especially visible in the skies and I suspect Topps intended it to replicate the vintage look.

For the few of us who would even notice what Topps is doing it’s borderline close to ruining the whole product by sending it into an uncanny valley between looking “authentic” and being a wonderful update which modernizes the design.

This becomes especially apparent on the All-Stars cards. I’ve gone ahead and scanned details from a real 1969 card since it makes the comparison that much more obvious.

Topps, to its credit, has the greyscale background image printed in just black ink.  But the fake halftone effect is extremely obvious and extremely large. You can tell its a fake effect because the dots are all the same size—in a traditional screen the dots change size—plus the scale is completely off.

There’s also an artificially large trap where the black and white photo overlaps the red header graphic. This is also something that was done intentionally as it appears on all the All-Star cards and is way too large to have been introduced by the printing process.

Comparing to the 1969 card shows just how different the screening looks. The fake halftone in 2018 distracts from the image since it’s merely imposed on top of it as a texture. In the 1969, the dots are the image.

You can also see here how much better the modern screening is when Topps doesn’t screw with it. In Trout’s cap you can barely make out any noise from the printing screen and what you can notice looks more like film grain. On the 1969 card Hawk’s hair is full of the halftone rosette pattern.

On the backs of the All-Star cards—and from what I’ve seen, the Deckle Edge inserts—this is even more obvious because Topps only applied the fake screen effect to parts of the image. As a result it stands out even more. The Deckle Edge inserts appear to be very similar to this. Rather than improving on the originals Topps has tried a lazy approach to faking an old-time look.

This is especially frustrating because there was so much potential for those inserts to look amazing compared to the 1969 versions. Just printing black and white photos with a stochastic screen would’ve been a huge improvement. But Topps also could’ve considered making them duotones and getting them even closer to looking like real photographs. 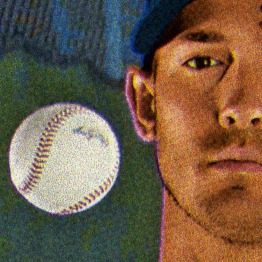 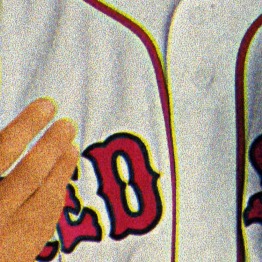 There’s also something else weird going on in many of the Heritage photos. This Porcello is the most egregious of the ones I’ve seen but it’s happening a lot. The photos look like they’ve been printed out of register except that printing on the dot and the edges of the photo are all registered correctly.

In the Porcello example there’s severe magenta fringing on his right ear and elbow. There’s equally-severe yellow fringing around the red details on his jersey. I’m a total loss at guessing what’s going on since the rest of the card doesn’t look out of register.*  However I am crossing my fingers and hoping that this isn’t another attempt to create a retro look through post-processing.

I want to like this set. I really do. Aside from all the short print nonsense* Topps is very close to having something wonderful here in updating old designs to show how good they are and how well they work today. Many of the cards in this set are extremely nice with their good photography, full statistics, and easy-to-read backs. The World Series cards with their box scores are fantastic. There’s so much going on that appeals to me.

*I can ignore the parallels and variants but having 20% of the checklist be intentionally short-printed just to create artificial scarcity is something that directly antagonizes me and the way I collect cards.

Yet this straddling of wanting to improve the original while simultaneously weighing it down with faked versions of 1969’s production keeps me from fully enjoying it. I’d love an update. And I’d love an all-period-details replicated set which is actually printed with a coarse traditional linescreen. Unfortunately those two goals aren’t compatible and trying to do both means Topps does neither. Did I enjoy my pack? Yes and it was fun seeing these in person for the first time. Do I feel the need to buy another? Not really.

9 thoughts on “Heritage and the Uncanny Valley”