Last year, I posted a piece on the 1969 Topps Deckle Edge inserts-which I’m sure everyone committed to memory. In case you flushed my masterpiece from your brain pan, I focused on the dated and poorly airbrushed photos, expansion team players, variations and the idea that kids would have been familiar with deckle edged prints from family photos. This post will compare the ’69 originals with the 2018 Topps Heritage Deckle Edge set. 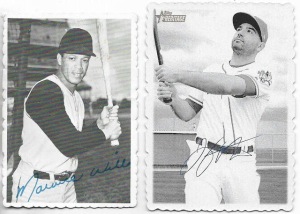 The obvious difference between the two sets is size. The ’69 cards are 2-1/4 X 3-1/4, while Heritage is standard card size. Topps did the same thing last year when they produced the ’68 game card insert in the standard format. The decision to not use the same size as the originals is interesting considering there is a mini variation set in 2018 Heritage. Plus, Topps did produce deckle cards in the correct size in the 2012 Archive. Standard size does work better for 9-pocket pages, but authenticity should have been the driver.

Topps veered away from the original set as well by not including a least one player from each team. The 30 card set features players from only 18 different teams. Of course, the Yankees and Red Sox have three players each. This east coast bias results in no Mariners being “deckled.” I’m sure lack of winning seasons and a small national following had nothing to do with the decision.

The Heritage deckle edge cards are one of the most plentiful of the subsets with 1 included in every 10 packs. This makes collecting the 30 cards doable from packs. In ’69, every wax pack of 3rd and 4th series cards had a deckle edge insert. Obviously, the odds were better 50 years ago of collecting all 33 cards from packs. The two variations (Joe Foy and Jimmy Wynn) were short-prints, thus more difficult to obtain. 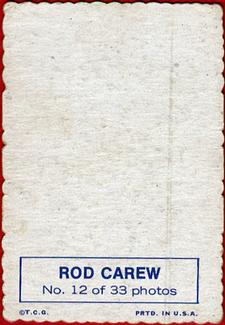 The 2018 Heritage and the 1969 deckles share the same back format as well: white with a blue, rectangular box containing the players’ names card number and the total number in the set at the bottom. The Topps trademark information appears beneath the box on both. The 2018 version contains the players team name in the box, while ’69 does not.

Topps Heritage mimics a unique aspect of the ’69 set: blue ink facsimile autographs. The blue ink was supposed to give the cards the look of an authentic autograph written with a pen. I discovered that Topps did a test run for deckle edge in ’68 that was never distributed. There are uncut proof pages and singles with blank backs that have blue, black and red autographs. Apparently, Topps wanted to see which color looked the most realistic. By the way, the O-Pee-Chee deckle cards used black ink for autographs.

Interestingly, the proof sheets contain nine images, only one of which was used in ‘69: Carl Yastrzemski. The rest of the players (Dave Adlesh, Hank Aguire, Sandy Alomar, Bob Johnson, Claude Osteen, Juan Pizzaro, Hal Woodeschick and Sonny Jackson–who is depicted on the Colt ‘45s–appear to have been randomly selected. Only Osteen could have reasonable been considered a star in 1968.

The Heritage base set does include players without caps and headshots that harken back to ’69. Why not include at least one deckle edge card that has badly airbrushed cap and uniform? Giancarlo Stanton is a prime candidate for this treatment.

I’m pleased that Topps included deckle edge cards, but disappointed in the sizing decision. As I’ve been telling my wife for 28 years, small is better.