1954 was a very eventful year in the USA. The Baby Boom was in full swing. Commercial sale of color television sets (15”!) began. The Army-Senator Joseph McCarthy hearings captivated the nation and ultimately led to his censure in December.   Ohio State and UCLA were co-national champions in college football, and Wisconsin’s Alan Ameche galloped off with the Heisman Trophy. In baseball the St. Louis Browns migrated east to become the Baltimore Orioles.   And ‘’The Catch’’ by Willie Mays in game 1 of the World Series etched its way into baseball lore.

1954 was also a significant year in the world of baseball cards. The two major companies manufactured extensive sets (Topps with 250 cards, Bowman with 224). In addition a wide array of regional issues dotted the collecting landscape.   This article will highlight several of the more prominent and unique local offerings, with emphasis on sets that include major league players.

Red Heart Dog Food was produced by John Morrell & Company of Cincinnati.  Dubbed the ‘’Big League Dog Food” it issued a 33-card set in ’54. Divided into three 11-card series (with background of red, blue, or green), each group could be obtained via a mail-in offer (10 cents plus 2 can labels).  In contrast to most regional issues “Red Hearts” featured players from a majority (14) of the 16 MLB teams. Eleven HOFers grace the set. Not surprisingly Mickey Mantle and Stan Musial are the most valuable; neither was included in that year’s Topps set.  Centering can be problematic, with this Bob Lemon card an example. Overall this set is quite reasonable in cost. 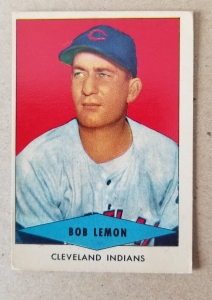 The New York Journal American was the result of the merger of two NYC newspapers owned by William Randolph Hearst. It was published from 1937-66. In 1954, during the heyday of baseball in Gotham, the Journal American offered a 59-card set. Featuring only Dodgers, Giants, and Yankees, individual cards were distributed at newsstands with the purchase of a paper. Card fronts bear player photographs (quite grainy in quality) and advertise a contest offering cash prizes.   The reverse displays the ’54 home schedule of the player’s team.   Common cards are comparable in price to those of the Topps issue. 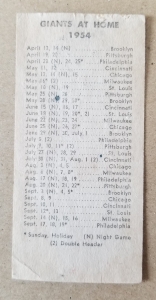 Turning to the Great Lakes, the Dan Dee Pretzel and Potato Chip Company was a family-operated snack food business for over 70 years throughout Ohio, West Virginia, and western Pennsylvania.   Founded near Pittsburgh in 1913 the company relocated to Cleveland in 1916.   The 1954 “Dan Dees” are nearly as uncommon as the Wilson Franks.   The cards were placed in boxes of potato chips; despite being wax-coated they frequently became stained with chip residue. This 29-card issue features 14 Cleveland and eight Pittsburgh athletes. Three Yankees, two Dodgers, one Giant, and one Cardinal round out the roster. Short prints (Cooper, Smith, & Thomas) are notable, but by far the key to the set is the Mickey Mantle pasteboard. 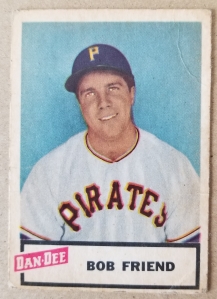 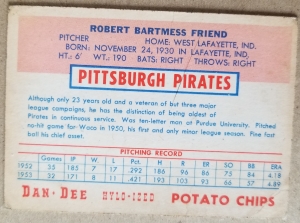 Speaking of Dan Dees photos of its New York players were also used in two other regional issues. Stahl-Meyer Franks (of NYC) offered cards from 1953-55. The ’54 version was a 12-card set featuring athletes from the Big Apple.   This set is very rare and expensive, with the HOFers (Mays, Mantle, Irvin, Snider, & Rizzuto) setting the price pace.   Similarly Briggs Meats issued sets in 1953-54.   28 Washington Senators and 12 New York players comprise the ’54 group.   With the slogan ‘’save these cards, collect them!, trade them!” two-card panels were issued in hotdog packages and distributed solely in the Washington, DC area. These are quite difficult to locate, and intact panels are very scarce.   Thus, these cards are big ticket items. In addition to Mays and Mantle, the short prints of Gil Coan and Newton Grasso are lavishly priced.

Several other regional issues deserve a brief mention. Esskay Hot Dogs Orioles celebrated the arrival of the new Baltimore AL franchise with a 34-card collection.   2-card panels were placed in packs of franks. These cards currently carry very high prices, reflective of their scarcity and significant condition-sensitivity.   Hunters Wieners Cardinals were manufactured from 1953-55. The ’54 set was unique: each 2-card panel included one with a player photo, the other with that player’s statistics.   HOFers Musial, Slaughter, & Schoendienst highlight this 30-card Redbird group.   Johnston Cookies headquarters was located near Milwaukee’s County Stadium. Johnston Cookies Braves were available from 1953-55, with a card inserted in each confection package. The ’54 series of 35 cards includes Braves assistant trainers (Joseph Taylor and Dr. Charles Lacks).   These cards are much less pricey than their Esskay and Hunters counterparts. 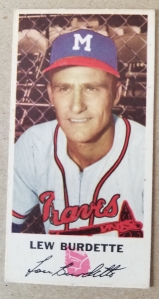 One can easily argue that 1954 was truly a golden year for card collecting.   Topps and Bowman competed bitterly, and these rivals failed to secure signed contracts from several key players (notably Stanley Frank Musial).   Regional issues helped to fill the void. Today’s vintage collector can enjoy the local flavor and pursuit of these fascinating collections.