Whether intentional or not, my blog posts tend to bring down the intellectual level of discourse to disturbing depths. Continuing in this vein, I present a “cardcentric” look at players whose first and last names rhyme.

The seed for this idea was planted after receiving a Royals team-issued, 1969 photo of Paul Schaal, part of a recent card swap. Schaal has some interesting cards, starting with his ’67 “green” variation. Apparently, a printing error coupled with poor quality control led to Topps issue some cards with a “greenish” cast. In Paul’s case, the tip of the bat is green. The back of his ’70 card features a cartoon showing a player being beaned. Topps seemed to find humor in Schaal having sustained a skull fracture in ‘68. You will find him “in action” in ’71, ’72 and ’74. 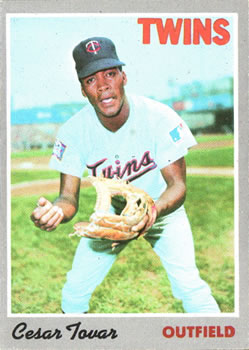 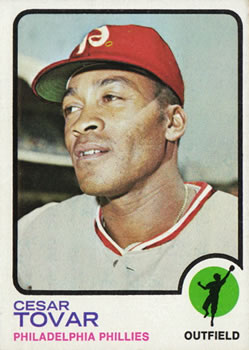 Cesar Tovar is another rhyming name with a few unique cards. His ’70 photo appears to show his glove with a hole in the webbing. Perhaps his anguished expression resulted from this discovery. After starting–primarily in outfield–for the Twins from ’66-’72, Cesar was dealt to the Phillies in ’73. This resulted in one of the ineptest airbrush jobs of the era. Of course, I must mention that he played all nine positions in a game in ’68.

This spectacular 1922 American Caramel E120 card of first “sacker” Lu Blue was distributed with candy. Lu was a serviceable starter for the Tigers, Browns and White Sox from ’21-’32.

Although not quite a perfect rhyme, Matt Batts must be included even if it is just to show this gorgeous ’55 Bowmen.

One of the premier hurlers of the late ‘40s and early ‘50s, Mel Parnell is featured on several classic ‘50s cards. On this ’53 Bowman Color, Mel strikes a unique pose with the glove hanging from his wrist.

Some lucky kid probably cut this ’62 Post Cereal card of Gene Green off a box of Grape Nuts.

1959 World Series Hero Larry Sherry probably needed the windbreaker in this ’62, considering the photo was taken at Candlestick Park.

Being paired on the ’65 Braves Rookie Stars card with the Alomar family patriarch, Sandy, didn’t bring any luck to John Braun. He pitched in one MLB game for the Braves posting two innings, allowing two hits and recording a strike out.

Quick. Who was the original Expos centerfielder in their first ever game (played at New York’s Shea Stadium) in 1969? The answer: Don Hahn, of course. After starting the first three games in New York and getting but one hit, Don was benched and eventually sent to the minors for the rest of the year.

Who can forget one of the most celebrated flops in baseball history? “Super” Joe Charboneau was AL Rookie of the Year for the Indians in ’80 and out of baseball by ’84.

A “rhymer” of more resent vintage is ’90s journeyman pitcher Mark Clark. No relation to the WWII general of the same name, I assume.

I will conclude this “drive through” look at poetically named players by presenting Mets farmhand, Ronald MacDonald. This ’80 card shows him on the AAA Tidewater Tides, which was his highwater mark in baseball. Alas, “Big Mac” “clowned around” in the minors for six years, never to see his dream of crossing under the “golden arches” and into the big leagues come to fruition.

I will create a list on SABR Encyclopedia so additional rhyming names can be added.   I’m certain this will prove to be an invaluable resource for scholarly research.