For me, Topps Now and Upper Deck Documentary are two of the most promising baseball card concepts that I’ve seen in terms of new directions the hobby could take. I love the idea of having one card per game for each team. And I love the idea of using modern printing technology for small print runs and quick product turnarounds. Marrying those two concepts is something I wish Topps Now would do instead of focusing on the usual big market teams and currently-hot stars.

I know I know, the idea of creating up to sixty different cards each day is a significant amount of work. That’s a lot of photos to pick, text to write, designs to compose, proofs to check, etc. etc. with a one-day turnaround. And yes at $10 a pop there’s no way anyone would collect a set of 162 cards for their team.* But the potential is so compelling I can’t help but imagine what it would be like to have such a set growing as the season grows with a photo of each highlight.

*As an aside, what price point would such a set be something worthwhile? Even $1/card feels high when thought of as a set.

Enter Matt Prigge who late last month dropped a tweet about rolling his own version of these and has since committed to doing this all summer. Matt’s using the Rookies App for this and the results look great so far. 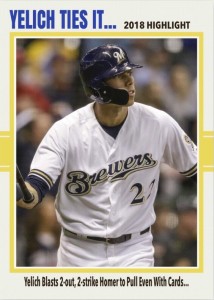 The Rookies App has a bunch of different templates that just drop photos into. You can add text to the pre-defined text fields and change some of the colors. But otherwise it’s pretty limited. It is a lot of fun and I’ve played with it a bit for photos of my sons in Little League but for a set like this where the text on the back is kind of important, I suspect that the app might get frustrating since you’re stuck entering all the text on your iPhone.

Matt’s doing a modified documentary set of just highlights. But he’s also doing  a complete roster of everyone who appears for the Brewers this season. He’s sourcing highlight photos for the highlights but he’s not limiting himself to this season for the roster images. I like this idea very much since not every game is a highlight and that sometimes there will be multiple highlights in a single game. Also not all players will have their own highlights but it’s nice for everyone to have a card in a set like this.

A bunch of us on Baseball Card Twitter have been inspired to try our own version of this project. Battlin’ Bucs has been doing a set of Pirates cards using his own design inspired by the 1961 Topps World Series subset. He’s taken what’s already a notable subset for Pirates fans and tweaked the colors to be even more Pirates-appropriate.

Battlin’ Bucs is only doing single-sided cards so the fact that this design allows for so much text is a big plus. I suspect that he’s also doing these in a Photoshop template and modifying each layer in his template where appropriate before saving everything as a JPG. He’s also going for a full 162-card set (with fingers crossed for more). 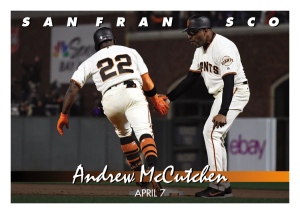 Meanwhile I’ve been inspired by 1993 Upper Deck and am doing a set of highlights and a complete roster like what Matt’s doing. I’m creating these in Indesign since I’m too much a text geek to do everything in Photoshop. This is definitely more work that using the Rookies App but it fits my preferences better.

It’s definitely been an interesting start to the season and has changed the way I’m reading game writeups since I’m now on the lookout for good photos from each game. I’m trying to only use photos of the players from this season as well (I’m missing only a few despite the newness of the season) but we’ll see if I can stick to this. 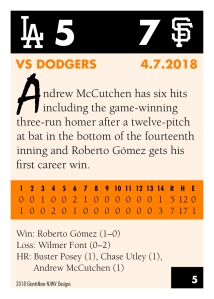 The thing about doing all these on my own is that I had to design the backs as well. This was the hardest part of the entire project. I’m pretty satisfied with a line score and one-paragraph writeup. And the Giants even had a 14-inning game to stress test my template to the limit of what it can handle.

By doing fronts and backs I’ve pretty much committed to printing these out. I’m not sure how I’ll be doing that but I’ll probably start with cheap 4″×6″ photo prints that I glue together since that’ll run me 20¢ a card max. If that doesn’t work I’ll figure out something else.

I’m looking forward to seeing how these projects progress over the summer. My fingers are crossed that more bloggers and card twitter people join us since an end-of-season round up of everyone’s sets will be cool to see.

And if anyone else in this community wants to join us but needs help getting started, don’t hesitate to ask. The more the merrier. We don’t need to rely on a company to make the cool yearbook sets that we all see as the promise and potential of Topps Now, we can do it ourselves.

6 thoughts on “You say you want a revolution…”