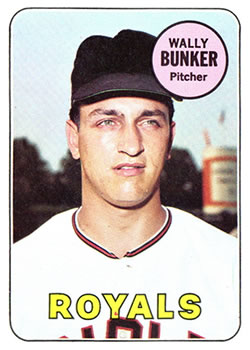 Since I first laid eyes on the 1969 Wally Bunker card, I’ve been mystified by the large, orange object in the background. The blurred image is cylindric with something protruding from the top. Was it a type of promotion, contest or an advertisement?

I have not spent the last 50 years obsessing over this photo, but I’ve never let go of my “orange whale” either. I contacted the Babe Ruth SABR Chapter in Baltimore to see if they knew the story behind the object. No one could shed light on the mystery but some suggested the photo was probably taken in Miami during spring training — it was not. The historian at the Babe Ruth Museum in Baltimore was clueless as well. I emailed the Orioles historian and sent a “tweet” to Jim Palmer but didn’t receive replies.

Furthermore, I “pecked” through the “Bird Seed” notes section in “The Sporting News” weekly Orioles columns in’64 and ’65 without finding a single mention of the object. I had similar luck with the “Baltimore Sun” and “Baltimore Evening Sun” archives.

My quest did highlight one of my favorite aspects of vintage cards: determining the location of the photos. Evidence points to Wally’s photo being taken at Memorial Stadium in Baltimore in ‘65. A Topps photographer did a photo session before a game between the Orioles and the Senators — as evidenced by the numerous ’66 cards with the stadium as the back drop. Memorial Stadium had several visual features (large support pillars, trees beyond the outfield fence, deck configuration and scoreboard) that are evident in the photos.

The year is confirmed by the presence of Jim Palmer. His rookie card appears in ’66 and he didn’t play for the Orioles prior to ‘65. 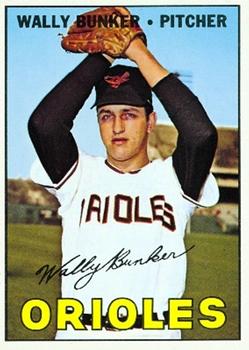 Both the ’66 and ’67 Bunker cards appear to be from this photo session, which increases the probability that the ’69 card is as well. Additionally, the soft, early evening lighting present in all the photos adds further credence to my supposition.

There are at least ten Senators and six Orioles ’66 cards taken on the same day in Baltimore. Ironically, Woodie Held was on the Senators when the photo was taken in ‘65, but was traded to the Orioles in off season. The ’66 and ’67 Frank Howard cards — as well as the ’67 poster — are also probably at Memorial Stadium.

Please respond if you can identify the “oatmeal box” shaped object. I don’t want to go to my grave with this highly profound and important mystery as my last thought.

15 thoughts on “My Orange Whale in Wally World”