The 1960 Topps set contains a unique subset: team coaches. Unlike ’73 and ’74 where the coaches appear on the manager’s card, in 1960 they were given special cards all their own. Topps went with the “floating head” design against a blank background. Depending on the team, there are three or four coaches on each. The backs provide brief biographical information. As with the managers in ’60, the cards are vertical, while the player cards have a horizontal design. Here is a look at some of the erstwhile “lieutenants.” 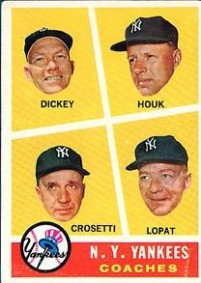 The Yankees card features several familiar faces, including Hall-of-Famer and former Bronx Bombers manager Bill Dickey. Ralph Houk — who will replace Casey Stengel in ’61 — will win back-to-back World Series titles in ’61 and ’62. Former ace hurler, Eddie Lopat, will come and go through Charlie Finley’s revolving door in KC as manager in ’63-’64. Of course, Yankee legend, Frank Crosetti, will be immortalized by serving as the Seattle Pilots third base coach.

The Cubs Elvin Tappe and Lou Klein were part of the ill-fated “College of Coaches” experiment the Cubs implemented from ’61-’65. Tappe was “head coach” on three occasions. Klein was the last head coach in ‘65 before Wrigley brought in Leo Durocher to serve as solo manager. 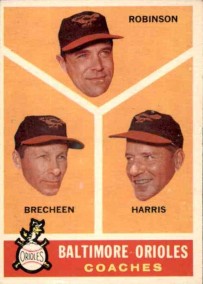 “Tall” Paul Richards apparently loved having Luman Harris around. Here he is as one of Richards’ coaches in Baltimore. When Paul took over as GM of the expansion Colt .45s in ’62, Lum came along to Houston and would eventually replace Harry Craft as manager. As Atlanta GM in ’68, Richards hired Harris to be Braves skipper.

Topps gave Dodgers pitching coach, Joe Becker, some serious exposure in ’60. Not only is he on the coach card, but Joe is shown being dowsed with beer on the World Series celebration card.

Two skippers in waiting — Johnny Keane and Harry “The Hat” Walker — are found on the Cardinals coaches card. Of course, Keane will take the reins of the Red Birds and lead them to the ’64 championship. Walker will guide the Pirates and Astros with mixed results. 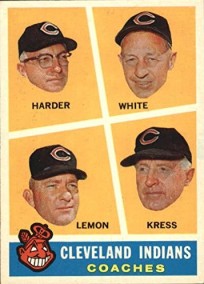 The Indians card features future Hall-of-Famer, Bob Lemon. He will manage the Royals, White Sox and, most famously, the ’78 World Champion Yankees. Also, the card has PCL and Seattle Rainiers legend Jo Jo White, who will serve as the Tribe’s interim manager for exactly one game in ’60.

1960 is the last year of the original American League Washington Senators before they depart for Minnesota. Coach Sam Mele will head to the mid-west with the club and eventually supplant Cookie Lavagetto as Twins manager. Sam will win the AL pennant in ’65.

I will leave you with a look at the Red Sox coaches simply because of Sal Maglie. The “Barber” will direct the hill staff of the ’67 “Impossible Dream” team and be remembered for advising his Seattle Pilots hurlers to “smoke ‘em inside.”

By my count, 19 of the coaches featured on the 16 cards would go on to manage or had managed at least one game in the majors.