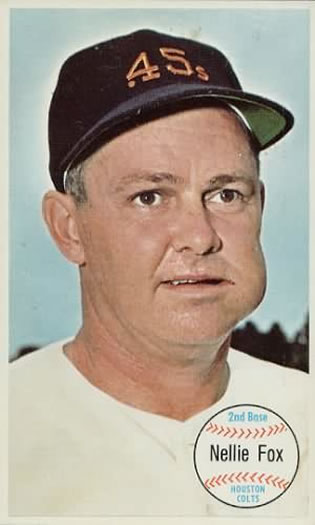 In 1964 Topps tried to “pull a fast one” by putting Nellie Fox’s picture on the back of Roy McMillan’s 1964 “Giant.”  In this wonderful set, McMillan is on the Mets and Nellie is wrapping up his Hall-of-Fame career with the Colt ‘45s.

Each “Giant” card has a black and white action photo on the back accompanying the text of a career highlight. A close examination of the grainy images-taken seconds apart-distinctly shows the “short and squat” body of Fox, along with his signature “chaw” of tobacco distending his cheek in both photos. The one on the McMillan card captures the Texas flag emblem and distinctive stirrup striping worn by Houston. Plus, Roy’s signature glasses are nowhere to be found. The .45s insignia and the Houston jersey script on the Fox card “seals the deal.” Finally, the photos must be from ’64 since Nellie was still playing for the White Sox in ’63.

As Mark Armour pointed out in his informative blog post on the ’64 large format cards, the series was not issued until late summer. This means the players’ photos are all up-to-date, and several of the photos on the back are from the ’64 season. The photos on the McMillan and Fox cards appear to be taken on August 1st at Shea Stadium.

The exact game can be pinpointed based on the identity of the sliding runner, who’s wearing number 15 on his pinstriped uniform. The Mets, Cubs and Phillies were the only NL clubs to wear pinstripes in ’64. This is not a Phillies player, since they had extra-large numbers in that era. Leo Burke wore 15 for the Cubs, but was not involved in a play at second with Fox. Thus, the runner must be Mets pitcher Al Jackson.

In the third inning of a day game on Saturday, August 1, Jackson singled off Hal Brown and was subsequently erased at second on double play ball hit by Bobby Klaus. The two photos show Fox turning the “twin killing.”

By the way, the Mets beat the Colt .45’s 3 to 2 with Jackson tossing a complete game. McMillan started at shortstop for the Mets, so the photographer had multiple opportunities to snap a photo of Roy.

It is conceivable that the photos are from a ’64 spring training game. Until proven otherwise, I’m going with the “tilt” played at the brand new “Big Shea.”

9 thoughts on “Fox and Friends”