I love all aspects of baseball-card collecting, but one area of particular interest to me has always been the backs of the cards. Naturally the front design of a card set is going to be the first thing that people remember about it, but what’s presented on the flip side can greatly add to a set’s appeal, and sometimes detract from it. This article is hopefully the first of a few in which I’ll delve into what I consider sets with good—or lame—card backs.

I’ll start with the first baseball card set I completed as a child: the 340-card 1956 Topps set. This was their first set since Topps had won the war for sports card supremacy from Bowman, and it was the biggest Topps set since 1952. It’s also a very creative set, both front and back. The fronts feature a head shot superimposed over one of the player “in action.” The quality of the action shots vary greatly, and sometimes they’re even bogus… most famously, the Hank Aaron action shot is actually one of Willie Mays with a Milwaukee cap airbrushed onto him. When they work, they’re great, like this one of Jackie Robinson sliding home. 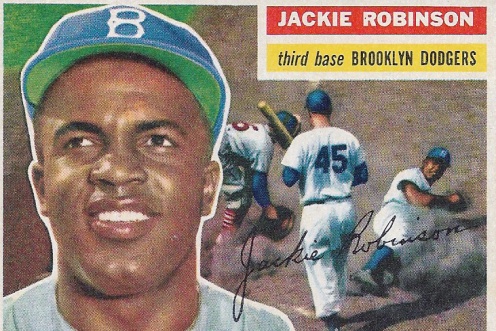 The backs of the 1956 Topps set, however, are almost universally outstanding. The stat lines only included the player’s 1955 stats, plus his career totals, but that left plenty of room for a three-picture cartoon graphic about the player, Those cartoons were simply fabulous. Articles about this set say that the work was done by some of the leading comic-book artists of the time… I would love to know exactly who they were, if anyone has more information. The graphics tell a little three-panel story about the player, in a very creative way. Let’s start with the back of the same Jackie Robinson card, nicely summarizing his greatness.

What appealed most to me about these 1956 card backs was how creative and downright funny they often were. Here’s Hoyt Wilhelm’s card, starting with a cartoon of his knuckler making a hitter dizzy and finishing with Hoyt having worn a trench between the bullpen and the mound.

Earl Torgeson’s card shows him watering some flowers (“Things grow fast in Detroit,” like Earl’s batting average); the oft-injured Torgy jumping out of bed because “The Tigers need a pinch hitter”; and Earl watching a game from first base while reclining on a bed, to note the time he played an entire game at first without making a putout. I love it.

Here’s Wally Moon, breaking out in song because he’s playing ball between school terms (any kid could relate to that); wearing a Roman garland on his hat for winning the Rookie of the Year award; and literally stealing some bases.

The sheer irreverence in so many of these cards is pretty wonderful. Windy McCall’s early control problems are depicted by a batter wearing a suit of armour while the pitch clangs off his head; meanwhile the suffering catcher sweats behind the plate with his right arm in a sling. I am fairly certain that if this was 2018 and Windy McCall was a Scott Boras client, this card would not have been made.

One of my all-time personal favorites, the Erv Palica card lampoons Brooklyn accents by showing a Dodger fan, thrilled with Palica’s fine 1950 season, exclaiming, “When Oiv pitches, da boids choip.” This cracked me up when I was eight years old; it still cracks me up at the age of 70.

The artists of these 1956 cards were challenged by the frequent presence of 1950s bonus players forced onto major leagues with no prior MLB experience. Cue cartoons featuring bags of money and captions saying things like, “The Redlegs feel Al (Silvera) will be a big star.” (Silvera would have exactly seven at-bats in his major league career, with one hit.) Well, it worked for Harmon Killebrew (card No. 164), and—eventually, as with Killebrew—No. 79, Sandy Koufax.

As a child with a reasonable degree of intelligence, I appreciated the fact that these cards weren’t afraid to be clever; they appealed to me in much the same way that TV shows like “Leave It to Beaver” and “Rocky and Bullwinkle” would wink and nod to me as I continued to mature.

But those were TV shows; this is a baseball card set. There’s never been a set quite like it.

A SABR member since 1979, Don Zminda writes about all kinds of baseball-related matters. View all posts by Don Zminda